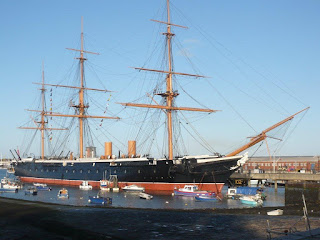 At over 400ft long and 58ft beam and displacement of over 9000 tons, she was the biggest war ship of her time (1860). Her 5267 hp steam engine was fired by 10 boilers and 40 furnaces for which she carried 850 ton of coal.
But in grand British tradition, the Warrior’s stokers (the men shovelling the coal for the furnaces) had white uniforms!

Hence the necessity for washing facilities for both men and uniforms. 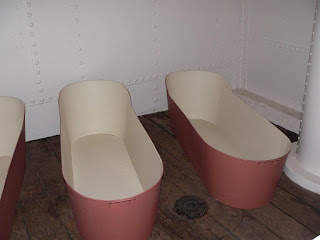 For the men and boys who worked in the boiler and engine rooms, baths were provided.
However, for the rest of the crew - each mess of 18 men had two buckets of cold water twice a week to wash in! 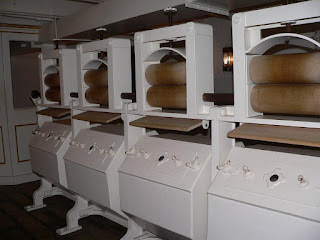 But rather than hand washing their white uniforms, HMS Warrior was the first ship to have washing machines.
The washing machines were filled with hot water. The clothes were put in, along with scrapings of soap. Turning the handles worked all the machines at the same time.
Clothes were then put through the wooden mangles to squeeze out the excess water.
(From HMS Warrior – Points of Interest – 1860)
HMS Warrior is a museum ship and a major exhibit of Portsmouth Historica Dockyard.

Haha! I've been on Warrior (which I believe is such an underrated ship!) quite a few times but I never knew that it had it's own washing machines! Thanks for sharing, I love your blog!
-Rae-Rae

Hi Margaret,
You have written glorious.

Hi Margaret,
Usually I do not read article on blogs, but I would like to say that this write-up very pressured me to check out and do it! Your writing taste has been surprised me. Thank you, quite nice article.