The Boy on the Rocking Horse - the Heroism of Growing up. 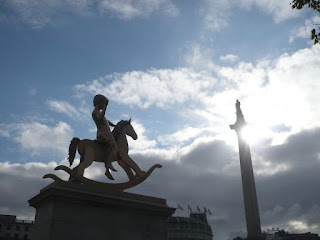 Boy on the Rocking Horse in London'd Trafalgar Square acknowledges ‘the heroism of growing up’, though Lord Nelson turns his back on the new artwork.
Unveiled in Feb 2012, Elmgreen and Dragset's 'Powerless Structures, Fig. 101' depicts a classically proportioned young boy atop a flat rocking horse.
According to the Telegraph.co.uk, the 4.1m high statue is the fifth contemporary artwork to adorn the empty plinth in the Fourth Plinth Project series, which has become an annual fixture in the London culture calendar and is considered a great honour for an artist.
In this artwork, the artists have created a twist on a traditional equestrian portrait, which instead of celebrating military victory and commemorating fame, acknowledges the “heroism of growing up”.
The artists wish that ‘in generations to come (they) hope that there will be a future where we won't have to have so many war monuments’. They ask, "Why do we have this tradition to put people on horseback if they have won a battle? What do we want to say by doing that?”
(www.telegraph.co.uk)