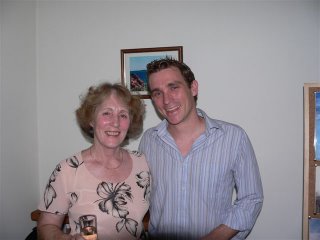 An Aussie author said that the champagne to celebrate the launch of one's first novel was by far the sweetest.
I'm sure she was right!
With forty friends and my son, Rob, alongside me, we gave Sea Dust a great send off.
I had a wonderful time.
(The Large Print rights to Sea Dust have been sold to Thorpe Publishing, London. It will be published in 2006)
Posted by M. C. Muir at 9:10 am 4 comments: Links to this post

It's a bit belated but today it's happening.
I am celebrating the launch of my first novel, Sea Dust, published by Robert Hale Ltd, London.
Sea Dust was released in the UK in December 2005 and Australia this month (Feb 2006).
This afternoon, my son, Rob, will official launch the book at a small party held at home.
I will not be breaking a bottle of champagne over it, but I will make sure we hear a few corks popping!
Though I say it myself, "Here's to Sea Dust!"
Posted by M. C. Muir at 10:16 am 4 comments: Links to this post

Nursery rhymes – the cornerstone of learning

Baa, Baa - not such a black sheep!
Nusery rhymes have been around for a long time.
Possibly the oldest line from a nursery rhyme is ‘Eena, meena, miny, mo’, reputed to have been recited by the Druids thousands of years ago when they picked their victims for human sacrifice.
But whatever their purpose or attraction, nursery rhymes have survived the centuries and are one of the infant’s earliest encounters with the English language.
Walter de la Mare described nursery rhymes as:
‘tiny masterpieces of word craftsmanship – of the latest device in rhythm . . . not only crammed with vivid little scenes and objects and living creatures, but, however fantastic and nonsensical they may be, they are a direct shortcut into poetry itself.’
Nursery hymes teach rhyme and rhythm, and through repetition, they teach the alphabet.
They introduce the child to words, sentences and syntax with rich examples of figures of speech such as tongue twisters (How much wood could a woodchuck chuck) and alliteration, (Sing a Song of Sixpence).
And with an appreciation for words and verse, the child learns to read.
This, in turn, later provides the author with a market for both children’s and adults’ books.
Modern English of the twentieth and twenty-first centuries has been modified in line with changes in culture and society.
Since the Middle Ages there have been wars, plagues, and the Industrial Revolution.
Today, space exploration and DNA cloning are things of the past.
Yet despite this, the poetry of the nursery rhyme has survived and almost all of today’s great leaders, writers and philosophers (though they may not like to admit it) have cut their teeth on ‘Baa Baa Black Sheep’ and ‘Humpty Dumpty sat on a wall’.
Photo of one of my melanian sheep with lamb - M. Muir
Posted by M. C. Muir at 11:16 am 2 comments: Links to this post 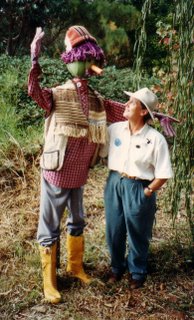 The day the scarecrows came to town
I got the idea for this children's story after visiting a Small Farms' Field Day held in a country town in Western Australia.
One of the main events was a scarecrow competition.
I was amazed, I had never seen so many scarecrows!
They were big, small, fat, thin, and dressed in all manner of costumes - guaranteed to send the imagination haywire!
My story, about Sam a rather delapidated straw man, had quite a cast of scarecrows in it.
And I even wrote a sequel.
Unfortunately, my limited attempts to get the story published were unsuccessful.
Perhaps now, with a little more knowledge of the publishing business, I should try again.

Photo: Me and a scarecrow at Balingup several years ago. The scarecrow is the one with the long nose!
Posted by M. C. Muir at 9:23 am 4 comments: Links to this post 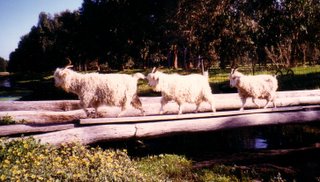 The Three Billy Goats Gruff
"Whose that tripping over my Bridge?" roared the Troll
Children love goats and they also love stories.
But to write a good children's story is an art. Getting published, even harder.
Because a children's story is short, it looks easy - but I assure you, it's not!
I've written a few children's stories - but never sold any.
The problem is, the of type story I write, is the type I listened to when I was a girl.
Now that was some time ago!
Today's kids live in a different world to the one I grew up in - they face different challenges - learn different things.
Consequently, the stories they read must appear within the sphere of their world.
Writers who have discovered that special link to the childhood imagination are lucky. With the right formula they are in demand from both readers and publishers.
In the meantime, I think I'll stick with the adult stories and the goats!

Photo: M Muir - Three of my angora bucks at Bluegum Park in Western Australia - visit my goat site at http://www.squidoo.com/goatlady