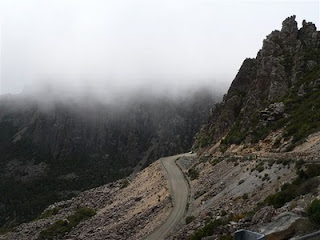 Last night I watched a DVD – “Ground Zero” (from my local library).
Although today is 11 September, the movie is not about 9/11’s ground zero, but it's about the Atomic testing at Maralinga, in the Australian desert in the 1950s & 60s.
Though this is a fiction story, it is based on fact surrounding the cover up by the British and Australian Governments.

It’s a powerful conspiracy movie and is very well acted (stars Colin Friels, Jack Thompson and Donald Pleasence).
But for me the most powerful message was in the captions which rolled at the end. Here is what was written:

1) At the time of the testing Aborigines were not included in the Australian census. At that time they were classed with livestock like emus and kangaroos.

2) The Maralinga site at Ground Zero will take 25,000 years to return to normal.
Is it surprising that the first land the Australian government returned to the Aborigines was at Maralinga!!!

Have a good day,
Marg

Pic: Parts of Tasmnaia are truly desolate. Despite this, in the early days the Colonial Government did all it could to remove (experminate) all of the indigenous population.
Posted by M. C. Muir at 10:01 am No comments:

The scars of racism - a true story

My name is -----, and I am of mixed race, Tasmanian Aboriginal, and Anglo-Saxon. I carry the guilt of one side along with the suffering of the other, with the scars caused by the racism visited on my family and myself by both.

I grew up in a small town, where my grandparents lived; my mum’s parents. Dad’s mum lived about an hour away, and she was disapproving to say the least, of mum, and of us. 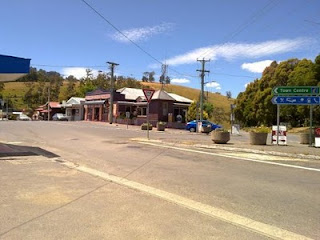 But Nanna wasn’t the only one, and, oddly enough, her contempt was the least hurtful, mainly because she was, well, she was Nanna, and she was difficult, and very opinionated, and so far as we could see, she hated all of her children’s spouses. The things that hurt the most were the ones we encountered on a daily basis.

My entire family suffered under the yoke of the label of ‘Abo’, and all the negative connotations of, not so much the word, but the way it was said; with a sneer, and a glower. We were below the lowest rung on the social ladder, and expected to remember that. We were thieves, drunks, child rapists, drunks and violent.

One of the clearest - and most hurtful, even 32 years later - memories of racism I have comes from when I was 8. A girl in my class had invited me to her birthday party, and, all excited to be attending my first ‘proper’ birthday party, I arrived at the appointed time. The main part of the party was outside, we had fairy bread, and cocktail franks, and all the usual party food, until it was time for cake – then we had to go inside, because it was an icecream cake, and a blisteringly hot summer day. Everyone except me that is, I was stopped at the door by her mother, who informed me she didn’t want a ‘filthy, thieving Abo’ in her house. I left in tears, went home, and told my parents I left because I didn’t feel well. To this day, Mum does not know the truth. Dad never knew. It would have destroyed them. As much as it is the job of parents to protect their children, sometimes children have to protect their parents.

I was taunted at school, followed around shops, frisked before leaving, and at times, I was followed home, to be accused of stealing. I was bashed and abused by my peers – those who didn’t go out of their way to avoid me, in case they got some form of contagion from the Abo. If I went to someone’s home, I was expected to enter and leave by the back door, and to make sure there was no-one around to see me arrive or leave. My extended family, most of whom lived out of town, and were the cause of our labelling as thieving, lazy, drunk and violent, were furious with my parents for paying rent to a white landlord, and sending us to a whitefella school, where we were only learning how worthless the whites thought we were.

The most vocal of these was my Uncle, who lived in the bush in a corrugated iron shanty, with his wife, son, and daughter. He was a violent drunk, who delighted in belting his wife and daughter, and would ‘hire’ his family out in exchange for grog. I despised him, and dreaded those occasions where we had to see him. Sadly, he really was my uncle, an actual blood relative. I sincerely hope he burns in Hell. The townspeople I can forgive, to a degree, but not him. The damage he did to me, and my family, as well as his own, is immeasurable, and unforgivable.

We left the area when I was 14, but I still haven’t healed the wounds that those years caused. To this day, I fear being judged for what I am, rather than who I am. I still struggle to get my head around the race debate; I live with one foot on either side of the line, with my head and heart in the middle, spinning in a various random directions. And the older I get, the worse it gets. The scars thicken, and the spinning in my head and heart get faster, and more random.

I have never been back to the town where I spent most of my childhood, and I cannot see it ever happening. There are just too many ghosts, and too much pain. I carry the people there with me every single day, both the good and the bad. I will do so for the rest of my life. And that is ok, they helped shape me.
I will continue to correct those who call me an Indigenous Australian (I find the term offensive), and defend my right to do so.

I will also continue to defend my right to celebrate Australia Day as Australia Day, rather than Invasion Day, as certain activists would have me do. My beliefs and principles are the things that make me who I am, here and now. What happened to me, and my family, in the past, may help to shape me, and continue to hurt me, but it is not who I am. While I may not be completely sure exactly who that is, I am damn sure that whoever it is, is more than the sum of a few strands of DNA.

The writer wished to remain anonymous, but I thank her for allowing me to print her story here
Posted by M. C. Muir at 8:27 pm 1 comment: