The King is dead - a Dead River. 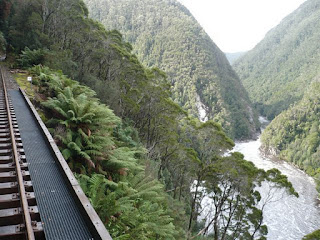 The magnificent King River in Tasmania’s west coast wilderness is biologically dead. It will take 1000 years for it to be capable of supporting any form of life. This is the result of greedy mining practices which went on unabated for decades.
But are we learning from history’s mistakes?
Posted by M. C. Muir at 6:56 pm No comments: Links to this post 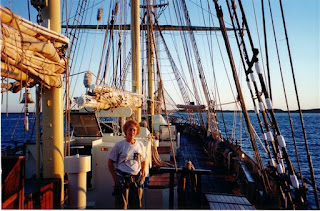 The Monte Bello Islands, are an archipelago lying 130 km (81 mi) off coast of north-western Australia. Montebello is Italian for "beautiful mountain" and it was here that the first of three British nuclear weapons tests took place in 1952 and 1956.
The second of these, codenamed G2, was the largest device ever detonated in Australia, with a yield of 98 kt. Thousands of miles away, on the other side of Australia, towns such as Mount Isa, Julia Creek, Longreach and Rockhampton were contaminated by atomic fallout.

Today, and for the next few days, I’ll be studying for my Australian Environmental History Exam. But I would rather be on the waters off the Monte Bello Islands.
Pic: on board STS Leeuwin during a 12 day Indian Ocean Voyage
Posted by M. C. Muir at 8:39 am No comments: Links to this post