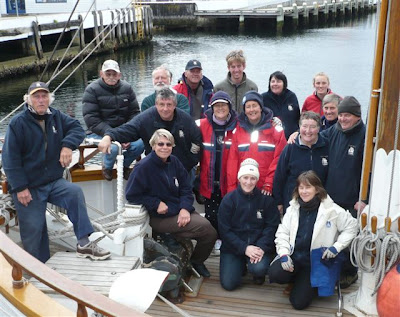 The 3-day sail for members of the Tasmanian Sail Training Association was to Pedra Branca off the southern coast of Tasmania.
Unfortunatley the conditions were not the best, but everyone agreed it was a great weekend. You can read about it in the following post.
Pic: Lady Nelson at her home port: Hobart, Tasmania
Posted by M. C. Muir at 4:21 pm No comments: Links to this post 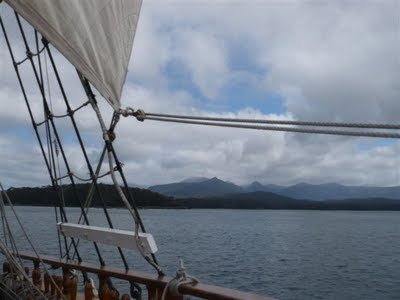 Last weekend I joined The Lady Nelson in Hobart for a 3-day sail. The destination was Pedra Branca – a ‘white rock’ 16 nautical miles off the south coast of Tasmania. As we sailed down the Derwent River the sea unremarkable but during the night, when we the D’Entrecasteaux Channel, the wind and sea picked up.

Like most of the crew trying to grab some sleep, it was a near impossibility, and with a 3m swell rolling up from the SW and a 1-2m sea from the W, the replica colonial brig was tossed like a cork.

That morning dawn was slow to break. Curtains of ominous clouds gathered, as I thought about Pedra Branca, and visualized the striking images I had seen on the Web of this isolated and inhospitable island. 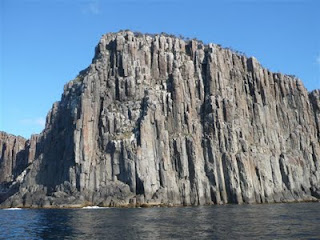 The smaller islands are Mewstone, Eddystone and Sidmouth Rocks. Over fifteen thousand years ago this group was part of the Tasmanian mainland and is listed as a World Heritage site. Three of the islands are composed of dolerite and sandstone which rise vertically from the ocean floor, but thousands of years of erosion have led to the formation of giant steps which rise to a height of 60 metres. The apparent white colouration is from guanno left by thousands of pairs of seabirds.

Sea conditions in this area can be treacherous and in 2002, a young research scientist was washed from the rocks by a freak wave despite having climbed to 45m above the sea. At the time the swell was recorded at almost 14m. And in 1973, a Japanese steel fishing vessel of 254 gross tons, hit the islet and sank within minutes. All but one of her 22 crew drowned.

As the Lady Nelson was tossed about, I considered how the tiny colonial brig, had battled the waves on her voyages in the early 1800s. The seas we were experiencing were small compared to the near 14m swell running on that fateful day in 2003. 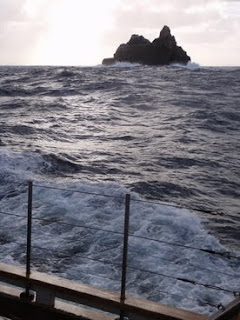 But the Southern Ocean can be a fickle body of water and at 7 nautical miles from the islands, the captain decided it was best to head back to the mainland.

Sitting at the stern and watching the following sea, I noted two angular grey smudges floating on the rippling horizon behind us. They appeared like a pair of ghost ships but I realised this was Pedra Branca and one of the other islands.

I may not have sailed around Pedra Branca, but at least I can say I have seen the island, albeit from a distance.

Pics: Dolerite cliffs at Cape Raoul + SW Tassie mainland + Pedra Branca courtesy of Jane Elek from the 2010 voyage which made it to the island
Posted by M. C. Muir at 4:06 pm No comments: Links to this post 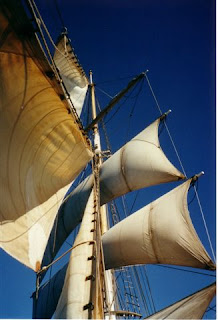 Due for publication by Robert Hale, London in May 2010, FLOATING GOLD is an age-of-sail nautical fiction adventure. It is set in 1802 during the awkward Peace of Amiens when both naval ships and men lay idol. Frustrated by an old injury and by the Admiralty’s lack of response to his recent requests for a commission, Captain Quintrell reminisces:

Closing his eyes for a moment, he pictured a white beach the morning after battle. A bay littered with bloated bodies, some washed ashore, others turning in the shallows like pigs roasting on spits – carcases rolling over and over unable to made landfall. Dead men stripped of clothes and skin. Faceless faces devoid of their human masks. Arms, wrenched from shoulders, scattered haphazardly. Hands poking up through sand. Fingers outstretched in supplication. Severed heads without ears. Human hair blowing in the breeze. The scream of frenzied gulls.

Such an inglorious end robbed a man not only of his raiments but all evidence of nationality, allegiance and rank. For those departed souls there was neither honour nor glory nor recognition - not even a Christian burial. Their mortal remains would be stripped clean by armies of invading crabs. And there were many fat crabs on the beaches that season.

When he is summonsed to attend the Sea Lords, the captain receives his orders - to head for the Southern Ocean in search of an unspecified treasure. But when Oliver Quintrell sets sail from Portsmouth, he has no idea of the dangers which lie ahead.

FLOATING GOLD is a maritime adventure inspired by the classic seafaring stories of CS Forester and Patrick O’Brian. Unlike Margaret Muir’s previous books, this novel targets a male audience.
Posted by M. C. Muir at 8:36 am No comments: Links to this post 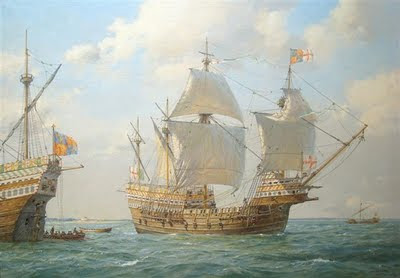 This year marks the 500th aniversary of the launching of the Mary Rose in 1509. It also marks a special project launched to help fund the new Museum to house the hull of the Mary Rose and display recovered items which have previously never been exhibited.
In support of the project Geoff Hunt has donated his recent magnificent painting of Henry V111's flagship to the Mary Rose Trust.

To view the pic go to: MARY ROSE
To find out more about the project go to: maryrose500.org
Posted by M. C. Muir at 12:43 pm No comments: Links to this post 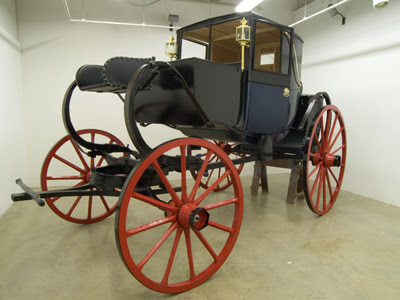 Browsing through Saturday morning’s Hobart Town Gazette - 14 September, 1816 (as one would), I read a remarkable article about Bonaparte’s carriage.
This fine vehicle was taken by General Kellerman at the Battle of Waterloo (June 1815) and sold to the Prince Regent for 3000 guineas.
The news article describes the interior in fine detail.

Inside the carriage were many compartments for maps and telescopes, a small writing desk beneath which was a hole for an iron bed (folding), two merino mattresses, and a liquor case.
The accessaire, an elegant mahogany box, contained mother-of-pearl razors, silver toothbrush, shaving box, ink stand and sand box, teapot and sugar box and two elegant candle sticks.
Napoleon’s personal items included several bottles of eau do Cologne, and eau de lavender – even (despite his old English enemy) bars of Windsor soap.
Apart from rum and sweet wine in his liquor case, there was also a silver mustard box, silver plates and cutlery, even a box for sandwiches.
Other items in the coach – a pair of red morocco slippers, green velvet cap, a silver chamber pot and a large silver watch on a chain with an alarm.
Bonaparte obviously valued his comfort when travelling.

Sadly in 1825, the carriage on display at Madame Tussaud's was consumed by fire You can read more in the following post.

Pic: Replica of Napoleon’s carriage created by Lewis Colburn for Interregnum (1815-1969)
Posted by M. C. Muir at 1:24 pm No comments: Links to this post

Following the French defeat at the Battle of Waterloo, Bonaparte’s carriage was taken as one of the spoils of war. Once in England, it was displayed around the length and breadth of Britain attracting huge crowds.

In her Perthshire Diary (April 19th 1818) Miss Wright wrote:
“Sat in it a while. Had such an odd feeling in doing so, to think that I was in the very seat of one that almost ruled the world. The jewels and plate very beautiful and everything so compact and neat. The Major (her friend’s dog) in it too, forsooth. Barked at such a rate. It came early this morning. Goes off at five tomorrow.” Next day “While we were at breakfast, Bonaparte’s carriage passed down on its way to Stirling, the four brown horses and the same driver he had at Waterloo.”
Imagine being allowed to take one’s dog into such a treasure!

In 1842, the carriage was acquired by Madame Tussaud's where it remained until 1925 when on 18 March, a disastrous fire swept through the waxworks, destroying not only the carriage but also the Napoleon Room. All that remained was a single twisted axle. 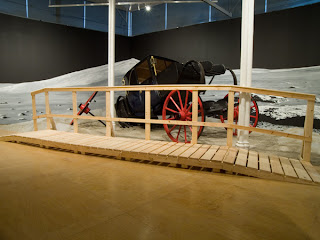 Recently, sculptor/artist Lewis Colburn rebuilt an exact replica of this magnificent vehicle and included it in his mixed media installation – Interregnum (1815-1969).
In the exhibit the carriage is presented as having crashed onto the lunar surface.

For me, the project appears to bridge the void, loosely linking the aspirations of past and latter day travellers striving but not always succeeding to conquer vaste new territories.
Interregnum is currently on exhibition at Hallwalls Contemporary Arts Center, Buffalo, NY

Note: Interregnum is literally the period during which a state has no normal ruler.
Interregnum Image: Courtesy of Lewis Colburn
The group of Italian re-enactment soldiers adds to the atmosphere. (Photo: Hugo Munoz)
Posted by M. C. Muir at 1:09 pm No comments: Links to this post

If you haven’t yet seen it, I recommend you do.
Both the acting and choreography are excellent. The movie is brilliantly directed with some great sound effects. And the snapshots scenes in China are a stark contrast to the city of Huston, Texas.

Li Cunxin’s story, first published as a biography, is unforgettable. From his childhood, growing up in poverty in Communist China, to his defection in America through to the final dramatic climax, the story reveals what one man can achieve through artistic talent and determination.

The few reviews which I have read, which are less positive, come from male reviewers. I believe it will be the females in the audience whose hearts will be touched by this powerful story. Interestingly however, in an interview on ABC (AU) radio this morning, the male critic admitted that he was unable to halt the flow of tears at the emotional climax.

I was the same and would liken my feelings to those at the end of Finding Neverland, A Town like Alice, and Billy Elliot.
Made on a limited budget by Australian director Bruce Beresford, Mao’s Last Dancer features world renowned dancer Chi Cao playing the role of (adult) Li Cunxin. It also features members of the Australian Ballet.
It is a splendid movie which I will certainly buy when it comes out on DVD.

Note: Li Cunxin now lives in Melbourne Australia and recently received the award of Australian Father of the Year, 2009.
Posted by M. C. Muir at 6:26 pm No comments: Links to this post


During the Napoleonic wars such lethal weapons were fired from cannon on board fighting ships.
The design of the weapons was to facilitate maximum damage to the enemy - both man and ship.
Here you see Chain Shot and Shot with Points for a 12 pounder smoothbore gun.

I don't expect my forthcoming book to have such devastating effects however I can advise that FLOATING GOLD, and age-of-sail adventure, will be published in late May 2010.

I took this picture in the Maritime Museum in Valparaiso, Chile.
Posted by M. C. Muir at 8:35 am No comments: Links to this post