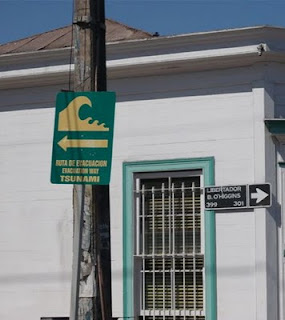 While a catastrophic tsunami or earthquake is something no country wants to experience, these sorts of natural disasters are eventuallities which Chileans have some provisions for.

I have visited Chile on two occasions and was told in Santiago back in 2004 that a big earthquake in the region was overdue.
The last one they experienced measured over 9 on the Richter Scale. It was the biggest quake on record in the world.

When I visited in 2008, I noticed on almost every street corner of one of the northern Chilean coastal towns, Tsumani warning signs with arrows pointing to higher ground.


Why is it then that warnings on Australian beaches go unheeded by some brave/foolish beachgoers?
The cost of installing these systems must be enormous but some folk treat the early warnings almost as a joke. And some are disappointed if they do not see the catastrophic tsunami wave.

This is the second quake in a short period of time (Haiti only a few weeks ago). Obviously some of the tectonic plates are on the move?

The big question is - is California due for the big one?
I've never been to Califormia (apart from changing planes in LA) but I doubt they have warning signs on the street corners - and if they do, will people take heed of them when the sirens sound?
Posted by M. C. Muir at 12:20 am 1 comment: