Hale authors join together on Blog


In the last week a group of authors, published by Robert Hale Ltd in London, got together to produce a regular Blog, and to communicate via a Yahoo forum.
Though the writers come from far and wide – UK and Europe, New Zealand, Australia and USA – they are united in a common goal, namely to promote their books and learn from in each other in such areas as publicity and promotion.
Writing is a very solitary business, therefore there is a certain camaraderie in being able to contact fellow authors who reside within the same publishing house.
You can find the Hale Authors blog at http://www.haleauthors.blogspot.com
If you are a Hale author and would like to join the Yahoo group and blog go to: haleauthors@yahoo.com

Photo 2008: Author in the grounds of the old Seaman's Hospital at Greenwich. The building was designed by Sir Christopher Wren. It now houses the National Maritime Museum.
I visited Greenwich last year and used this location in one of my novels
Posted by M. C. Muir at 12:01 pm No comments: Links to this post

THE BLACK THREAD by Margaret Muir now in large print 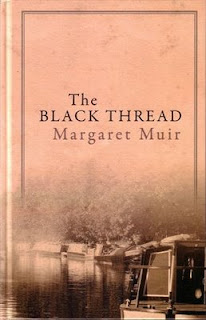 This month sees the publication of the Ulverscroft large print edition of my third novel THE BLACK THREAD (HaleBooks 2007).
This dramatic story is set against a background of the Yorkshire Woollen Mills and the towns of Leeds and Saltaire.
Much of the drama revolves around a journey on a working barge on the Leeds Liverpool Canal.
The year is 1895.
The cover on this edition is quite different to the artwork on the Hale publication.
Unfortunatley the picture depicts modern day narrowboats not 19th century shortboats.
But it does indicate it is a canal story.
Photo: Ulverscroft cover - THE BLACK THREAD
Posted by M. C. Muir at 9:06 am No comments: Links to this post


I found the ending to this movie one of the most touching I have ever seen.
FINDING NEVERLAND tells of the life of playwright, JM Barrie, and his relationship with the boys on whom he based his classic fairytale PETER PAN.
As a girl, I remember being taken to the Grand Theatre in Leeds (a setting not unlike that depicted in the movie), to see the pantomime PETER PAN.
That is a long time ago, but I can still remember marvelling at Peter Pan and the boys ‘flying’.
And who can forget 'Nana' the family's faithful Newfoundland dog who was the children's nannie.
Johnny Depp, who stars as Barrie, plays an excellent part as the writerly Scotsman – but then I happen to be a Johnny Depp fan.
This actor is a genius on the screen in whatever role he plays.
Worth watching for whatever reason.
Photo MM: No ticking crocodiles in my garden, but I do have several Bennett’s wallabies ranging in height from 8 inches to 2 feet tall who visit every night
Posted by M. C. Muir at 8:05 am No comments: Links to this post 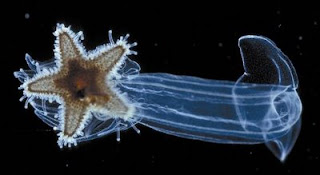 In the movie, FINDING NEVERLAND, a few definitions of the place Neverland are suggested.
Some see Never Land (as it was called in the play) as a magical place – somewhere to escape to.
Others see it as a place you go to when you die but never return from.
I see Neverland as the alternative world which writers create and transport their readers to.
In the writer’s mind, Neverland is as vivid as the place they live in.
It may be thousands of miles away, and set in a totally different era, but the writer can see it, smell it, touch it; feel the emotions of its people; their fear, joy, happiness; hear their laughter.
And the wonderful thing is that it costs nothing to go there.
Neverland is truly is a wonderful place.

Wishing on a star! Photo: From SEA LIFE IN FOCUS by Douglas P Wilson:
Larva of long armed starfish metamorphosing.
Posted by M. C. Muir at 8:01 am No comments: Links to this post

Email ThisBlogThis!Share to TwitterShare to FacebookShare to Pinterest
Labels: Neverland

Newfoundland dogs on stage and screen 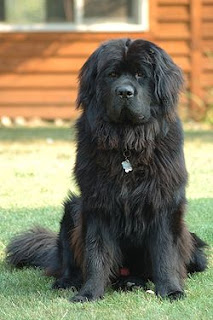 JM Barrie was probably the first writer, (certainly the best known), to make the Newfoundland dog breed famous on stage. In his play, PETER PAN (and subsequent Disney presentation), the Darling children’s nanny, Nana, is a large Newfoundland dog.
Other famous Newfoundlands include:
Boatswain - Lord Byron’s dog was portrayed neither on stage nor screen but is best remembered for the words which appear on his epitaph:
‘Beauty without Vanity, Strength without Insolence, Courage without Ferocity, and all the Virtues of Man, without his Vices’.
York was the Newfoundland who accompanied Lewis and Clark on their trek across America.
Pilot is the name Charlotte Bronte gave to the Newfoundland who belonged to Rochester in her classic novel, JANE EYRE.
In my latest novel, THE CONDOR’S FEATHER, due July 2009, I have created two Newfoundland dogs – Bella and Byron.
Byron is black while Bella would be classed as a Landseer as she has four white feet.
Not only are they faithful pets of their aristocratic owner but they have the search and rescue abilities of so many of their kind.
In the story, this pair of Newfoundlands travels with their mistress on her equestrian trek across the wilds of Patagonia in 1885.
The dogs appear throughout the story and I believe their presence adds to the book’s emotional impact in parts.

Photo: Typical black Newfoundland – Smoky from Wikipedia
Posted by M. C. Muir at 7:54 am No comments: Links to this post

Charlotte Bronte and me and a tree


Over the past three days I re-read Charlotte Bronte's, JANE EYRE.
A great read.
It's years since I read it and I'd forgotton much of the detail, including the part where the chestnut tree is rent in two by a storm.
In my book THE TWISTING VINE I featured a chestnut tree which is struck by lightening, and although the scenario is quite different to Bronte's, the tree in my story also carries considerable significance.
I could have sworn the chestnut tree idea was mine but no doubt it was a latent memory in my subconscious.
I guess everything a writer writes comes from things they have seen, read or experienced at some time in their life.
Photo: Candles on a horsechestnut tree - Putney 20008
Posted by M. C. Muir at 8:31 am No comments: Links to this post