Ashes to Ashes, Dust to Dust 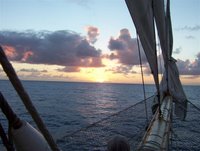 PJ and I met on a ship on the Indian Ocean.
We shared a love of the sea, of writing and of travelling.
In the two and a half years we were together we sailed on the Mediterranean, cruised the Indian Ocean and the South China Sea. We crossed the Atlantic on a clipper and flew across the Pacific three times. We even voyages through the Southern Ocean, crossing Drake Passage to witness the awesome beauty of the Antarctic Peninsular.
What a wonderful time we had together.
What memories!
PJ said that if anything happened to him he wanted his ashes to be scattered in the sea from the deck of a cruise ship.
Next week I will fulfil his wish as, with my son, I join a cruise ship in Civitavecchia (Rome) and sail out into the Mediterranean to say my final farewell.

SEA DUST - the romance of the sea and tall sailing ships

The following review of my novel 'Sea Dust' appeared in the Historical Novel Society's May journal. Reviewer, Fenella Miller wrote:

This is a well-written and interesting book which has been impeccably researched.
The vivid descriptions of Victorian Whitby, and ship board life, bring the places alive.
The author makes you feel as though you are walking through the streets and can actually smell the fish entrails and the body odours of the poor folk you pass.
The ship-board scenes make the reader understand what it is that draws men to the sea despite its dangers.
In this book the characters seem less important than the sea, the ship and the places. It is like looking through a window into the past – catching glimpses of emotions and events but remaining outside, not becoming involved.
Sea Dust is a love story, but not between the main characters, that is peripheral, it is about the romance of the sea and tall sailing ships.
This novel will appeal to anyone who has an interest in things maritime and a love of the past.
Ref : http://www.historicalnovelsociety.org
Posted by M. C. Muir at 12:08 am No comments: Links to this post