“It has been said that this land was the last place on earth which God created. That he used all the pieces He had left over, the deserts, plateaux, mountains, rivers, lakes and glaciers. Not wanting to waste anything He threw them all together and created the tail end of the earth.” 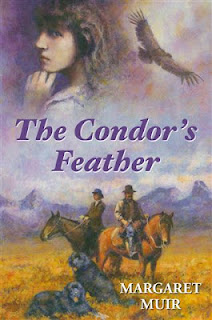 This is just one of Margaret Muir’s evocative and memorable descriptions of Patagonia, a land about which so much has been written and repeated. Muir spends a great deal of time creating a sense of the Patagonian landscape in all of its beauty and, at times, savagery. She evokes the constantly changing colours of the Patagonian sky but also takes moments to cover the vast open steppe with its violent winds and sandstorms that rake the land, so the reader is left in no doubt of the formidable wild frontier that Patagonia once represented to most, even until the fairly recent past. She also clearly has a love for animals, vividly describing both domestic animals such as the dogs and horses that travel with their masters, and the wild guanaco, pumas, ostrich-like ñandus and condors that the travellers meet on their journey. 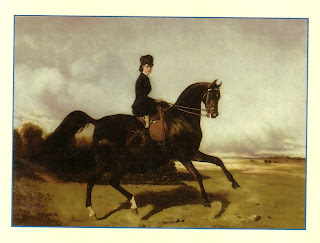 It’s not just the landscape and nature that feel well-researched and rooted in fact. The Condor’s Feather is actually inspired by the real-life travels of fascinating Englishwoman Lady Florence Dixie who rode across the Agentinian pampas in 1878 at the age of just 21, and Muir’s tale bears all of the hallmarks of meticulous historical research. Starting out from her country house in England, our heroine Cynthia “Thia” Beresford heads first to Liverpool from where she embarks on a lengthy steamship journey to Punta Arenas in Chilean Patagonia. We are treated to all kinds of intriguing details about the boat itself and steamboat travel in general during the late 1800s that lend a feeling of real authenticity to the story. On arriving in Patagonia, the reader learns about the history of the native peoples, the colonisers and the cowboys that roam the land along with Thia herself, without it ever feeling like a history lesson. 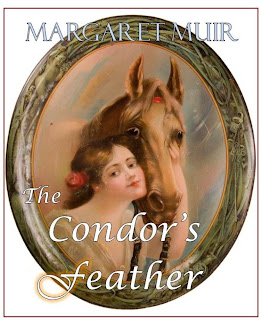 Thia, meanwhile, is everything that a Victorian lady shouldn’t be. Outspoken, strong-willed and a champion of feminist issues long before they came to the fore of most people’s minds. Muir also deals with issues of class at Thia’s country estate, Huntingley, in the English countryside. As readers, we see into the lives of both the upper classes and the army of downstairs staff that make their life of ease and leisure possible, with the eternal appeal created by the tension between the two. 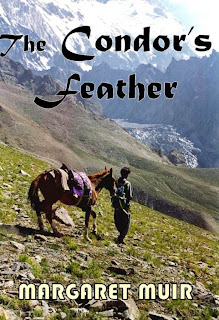 Back in Patagonia, although there is a hint of romantic tension from the moment that Thia meets mysterious Welsh stranger Euan, The Condor’s Feather is definitely more adventure travel story than it is pure romance novel. Although Muir makes us wait until the dying pages to give up Euan’s dark secrets, the real twist is not the revelation of his past at all, but rather his relationship with Thia. Without wanting to spoil the ending, it’s worth mentioning that for a book that could stray dangerously close to swooning Victorian damsels falling at the feet of strong, silent cowboys, Muir deftly sidesteps these clichés and serves up an ending full of promise and free of stereotype.

The Condor’s Feather is an easy and relatively quick read that canters through grasslands, mountains and rivers, mixing cowboys and indians, criminals and turn-of-the-century aristocrats. All in all, a great piece of Patagonia holiday fiction!

Read The Condor’s Feather if...
•You’re a regular viewer of Downton Abbey.
•You’re planning to go horseback riding in Patagonia.
•You’d like to know more about Patagonia’s turbulent past.

The Condor's Feather is available as an e-book for in paperback.

I first 'met' Karen Mercury through the Historical Novel Society and thoroughly enjoyed reading her historical adventure, "The Hinterlands".
A love or writing, travel and adventure was something we shared across the Internet Miles (Tasmania - Australia to California, USA), and when I was writing "The Condor's Feather", a story with a Newfoundland dog in it, she introduced me to Ishi, her Newfoundland.

Here is a little about Karen Mercury from her new Blogsite. Be prepared to burn your fingers when you enter! 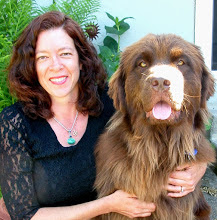 When Karen was 12, she had a dream of being in a village on the coast of Kenya, so at 23 she bought a one-way plane ticket to Nairobi to find the village. She climbed the Mountains of the Moon in Rwanda to see mountain gorillas, hitchhiked overland through Egypt, Uganda, Zaire, and Zambia, lived with the Turkana in the Northern Frontier District of Kenya, went down the Congo on a decrepit steamer, and sailed up the Nile on a leaky dhow.

She is specializing in MMF westerns because let's face it. With two men who can take care of themselves as well as you, a lady can kick back, relax, and enjoy the scenery. 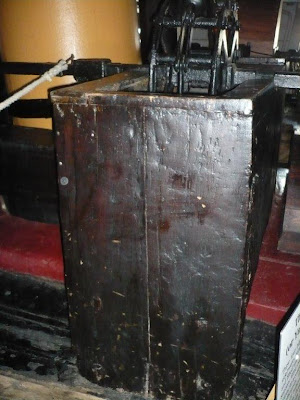 HMS VICTORY – The Chain (or Yard) Pumps
“Four bilge pumps (two on each side) were operated by crank handles and lifted water by means of leather saucers fitted every three feet (0.91 m) to a continuous chain. Working efficiently, these pumps were capable of removing approximately 1,350 gallons (6,143 L) or water per minute from the bilges.
Based on a much earlier type, the design of this pump was improved upon by William Cole circa 1774. Nearby is an elm tree pump which, taking a direct suction from the sea, could deliver 25 gallons (114 Lt) of water per minute for washing decks and fire-fighting.”
This information was placed in front of the square pump. 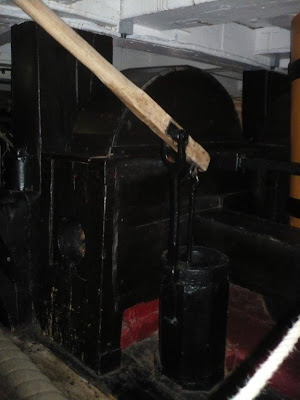 The pump in the second pic may be the elm-tree pump but I am not certain.
Courtesy of Portsmouth Historic Dockyard.
Posted by M. C. Muir at 7:55 am No comments: Links to this post

The sequel to FLOATING GOLD - why the delay? 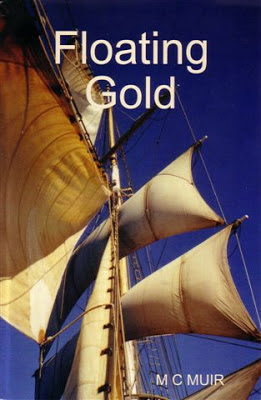 I have been asked - Why was there a 2-year gap between FLOATING GOLD and publication of the sequel THE TAINTED PRIZE?
The reason is because, when I asked my literary agent about writing a sequel, she said there was not much point!

That stopped me dead in my tracks. I stopped writing completely and took a year off, went back to University and did some more historical studies.
But, I held onto the belief that Captain Oliver Quintrell, Mr Parry and the rest of the crew of 'Elusive' were not dead in the water.
Having parted with my agent and publisher, I decided, in 2012 to go it alone and send the crew back to sea.
Hence THE TAINTED PRIZE is afloat - not packaged in the $54 hardback library version of a major publishing house (that was the RRP in Australia), but in a presentable self-published paperback, and also available as an e-book for only $2.99. 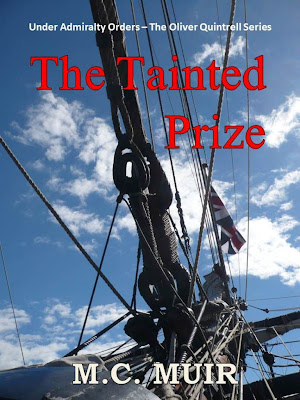 My joy is in sharing my work and look forward to the next adventure which I am just preparing to embark on.

FLOATING GOLD - a Review by Leserglede 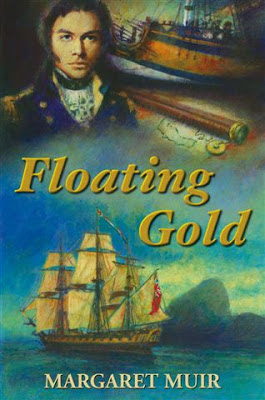 In this salty nautical fiction novel from the romantic Age of Sail, Margaret Muir introduces Captain Oliver Quintrell, a man with an intruiging background, extensive nautical skills and a very good head on his shoulders. As we meet him, he is ashore, having been wounded and recently released from Greenwich Hosital and then stranded ashore due to the unexpected outbreak of the Peace of Amiens in 1802. He is a salty dog who has lost most of his fingers on one hand, an injury related to “direct contact with a four pound cannon ball.” Along with scores of other post-captains he finds life ashore somewhat difficult – his marriage is not nearly what it once was - and eagerly awaits a new command and new orders.

Floating Gold is a nautical thriller that involves a well-plotted treasure hunt. Other nautical heroes too have been chasing treasures on the high seas and in excotic locations, most often Spanish galleons loaded with gold, but none of them – to my knowledge – have ever been chasing a treasure like the one that is featured in this book. It is an innovative and entertaining tale, rich on detail about England and life at sea, and a tale that is very well told. Captain Oliver Quintrell had expected to be commissioned to a Royal Navy sixty-four gun ship-of-the-line or perhaps even a larger ship, but is instead given command of HMS Elusive, a frigate on a secret mission with sealed orders. As there is peace and ships are being decommissioned every day, he accepts the commissions even though he is disappointed.

The mission turns out to be very difficult. The Elusive encounters storms, treason, murder, and sabotage until they finally arrive at their ultimate goal – a treacherous island close to the Antarctic. And hidden on this desolate, dangerous island is a vast, very mysterious treasure of unknown origins that Captain Quintrell, his officers and crew must find and carry back to England. Can Captain Quintrell retrieve the cargo he has been sent to find and return with it safely to England?

The story is entertaining and excellently told. The book felt very authentic - Margaret Muir knows life at sea and has visited the mysterious and dangerous island in the story. Her background and travels show in her writing and gives a sense of reality to the fantastic scenes she describes. However, I felt it took a little too long before the action started, but when it did I liked the book a lot. There was also too little naval action in the book, I felt – but I tend to be a tad “bloodthirsty” when I read nautical novels. I also liked the hero – Captain Oliver Quintrell – and found him intriguing, but while I am quite convinced he has an excellent head on his shoulders, I am not as yet equally convinced that he has the balls to become a beloved nautical hero.

Floating Gold is an excellent nautical fiction debut by Margaret Muir. I hope she continues to write about Quintrell – a character that I feel has a lot of potential.

If you like historical fiction, salty sea tales or clever adventures, Floating Gold is a book you should get hold of – it is very entertaining, well written and intelligently plotted!
Thanks to Leserglede for posting this review.