WORDS ON A CRUMPLED PAGE" - as reviewed by Rose Frankcombe

Margaret Muir has recently published a poetry book, Words on a Crumpled Page, an evocative title reflecting the history of the poetic inclusions.
Having a number of novels currently on the market, in the historical fiction and nautical fiction genres, Margaret has for the moment diversified and diverted from her usual writing path. Those accumulations of jottings, poems reflecting various aspects of her life over a number of years that have lain unloved and crumpled for too long, have now come to light in this new work.
How often do we have those brilliant flashes of insight at awkward moments or deep in the night when we can’t record them? Come the next day, the illumination of the previous 24 hours has vanished, never to return – unless – unless something has been scribbled down. The jottings on the cover are the actual folded or crumpled pages Margaret wrote her original poems on.
For Chapter 1 (of 10) of Words on a Crumpled Page, Margaret has chosen the title Twisted Trivia and begins with Today, a poem beginning benignly enough:
"Fronds of frost edged the cape-weed
like lace around a doily… She dried her cup…" - we had no idea what was next to unfold.
I’m sure our reaction at that reading would be a common one as the surprise end to the poem reveals itself. Once the essence of it has been absorbed, deep thought as to the whys of the act compel the reader to think quite deeply as to the agony of the protagonist.
For those who have met her, Margaret’s soft Yorkshire accent can be heard in the lines of her poems. Not a talkative woman, The Listener (Words falling on deaf ears), may in reality have been quite a trial for her:
"You never stop talking.
All day long
talk, talk, talk…"
For poets, anything’s fair game, even in this instance where the names of big rigs, the trucks plying the highways and byways of Australia were used. Go Bitch Wheels…
A lover of nature and all its bounty, there are chapters (not in order here) on earth, sea, sky, seasons. Poetry as art, haiku, joie de vivre, human emotion, and the human condition. An eclectic mix.
For those with an affinity for the sea, Sunset at Sea conjures the presence of the ocean in a benign mood, "… Dark sea murmurs as it rolls over…" but reading more into the words one finds there have been times when the sea has risen in response to Poseidon’s demand, his anger unrivalled in his quest for hapless sacrifices for the deep "…shielding the souls of sailors commended long ago…"
As indicated, this is an esoteric gathering of themes old and new. On contemporary energy collecting windmills:
"…Precocious teasers hail the virgin breeze
Catching the wind and tossing him about…"
The final poem in the collection is a very personal and a very moving one that must have been very hard not so much to write but to include.
There is something for everyone in this around 60-page poetry book. The various themes cover a broad spectrum of life, living and nature.
With this book launched, I would hope that in future another poetry book or two eventuates from Margaret’s pen, singularly following one theme, so the reader can completely immerse themselves into it, be it thematic of the sea, nature in general, love, contemporary life…
Inspiration for poems is all around us. All we need to be is observant - and jot the ideas down, just as Margaret had done…
WORDS ON A CRUMPLED PAGE is available from www.LULU.com in print for $6.80

Review of THE BLACK THREAD from the Historical Novel Society

Tina Huckle was the Historical Novel Society's reviewer of THE BLACK THREAD.

THE BLACK THREAD by Margaret Muir is an enchanting historical novel, well written with excellent local knowledge. It is a story based around the life of the mills and canal life around the turn of the century in hard working class Victorian Leeds and Liverpool. The main character, Amy Dodd, draws you into her life with the author’s excellent description and colourful narrative. Amos Dodd, Amy’s cruel father portrays a believable dark character and yet you cannot help but feel his pain and troubles.

An idealistic father he is not, and the story is full of shocking findings and clever twists. It is, I am sure, a true depiction of canal life in the Victorian age and has good historical content. The ending certainly leads itself to another book – which does, however, leave the reader a little disappointed.

Personally, the cover of the edition I was reviewing did not encourage me to pick this book up initially, which is a shame as on a shelf in a bookstore it is possible it could get over-looked, whereas the content inside is highly recommended. 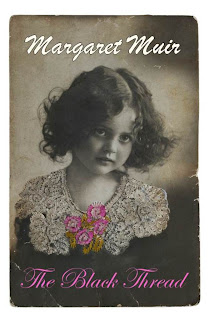 Note: as author, I have tried several covers for this novel.
Here is the cover for the e-book edition ($2.99):
I also find it interesting that Tina has described this as an 'enchanting' historical novel, whereas I saw it as rather dark, Gothic and dramatic. We certainly all read and see things differently and I thank her for her comments. 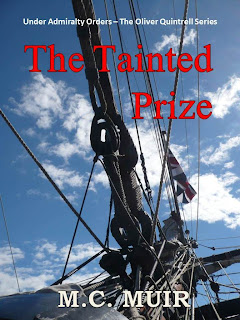 THE TAINTED PRIZE by M. C. Muir is the second in the Under Admiralty Orders Series about Oliver Quintrell, a naval captain serving at the beginning of the Napoleonic Wars in 1803 (first in the series is Floating Gold about a mission that takes Quintrell down to the islands near the Antarctic). As hostilities against the French loom, Quintrell is without a ship but hoping for a chance to see action. He gets his ship but the Admiralty send him on another clandestine mission, to South America in search of another naval vessel that that has failed to return. What follows is a lively adventure as Quintrell and his crew on the frigate Perpetual search sail towards Peru in search for the missing ship

As a fan of naval fiction set at the time of the Napoleonic wars, I’m always keen to read new series and I enjoyed Tainted Prize. The author writes knowledgeably about what life must have been like in the navy at that time, both for the officers and their men. The horrors of sea battles and naval discipline are not glossed over nor the difficulties of navigating with inaccurate sailing charts as when Captain Quintrell takes his ship through the Magellan Strait. 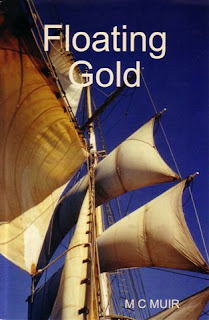 Ideally, it would be best to read the first book in the series in order to become familiar with the back-stories of the characters, but this is a separate story so can be read as a stand-alone. I hope there’s another adventure and that, if so, we get to know more about his second in command Simon Parry and about Captain Quintrell’s wife (who seems a potentially more interesting character than Susanna, the lover who waits patiently for him to call in at Madeira).

The book is well presented and laid out with an attractive cover. 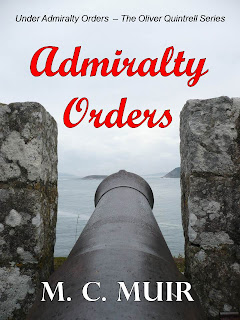 My thanks for Sue Ellison - the reviewer.
THE TAINTED PRIZE is available on Amazon.com in UK and US as paperback and e-book ($2.99).
The first book in the Oliver Quintrell Series was FLOATING GOLD.
Due 2013 - the third book in the series - ADMIRALTY ORDERS (draft cover).