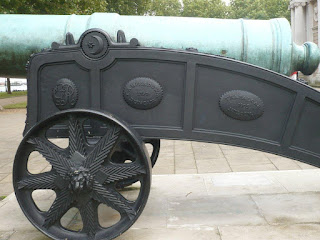 This Bronze gun was cast in 1790-91 during the reign of Ottoman Sultan Selim 111. It weighs 5.2 tonnes and fires stone shot of over 56 kgs.
It was one of a pair captured by Admiral Sir John Duckworth from Kinali Island in the Sea of Marmara in 1807.
The elaborate cast iron gun carriage was made later by the royal Carriage Department at the Royal Arsenal in Woolwich. Its decorative plaques denote British naval victories.
It now stands outside the National Maritime Museum in Greenwich.