Cruising with the mega-ships - Yes or No? 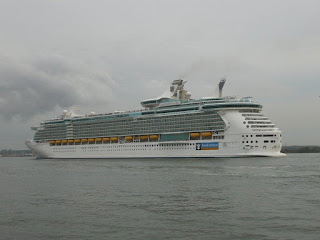 Having disembarked from a two week cruise to the Mediterranean, the next morning I watched the ship steam out of Southampton heading south again. It’s the first time I have sailed on one of the mega-ships (though certainly this is not the biggest on the sea) carrying over three and a half thousand passengers plus nearly half that number of crew.
Would I sail on such a big ship again? No.
For me it was too big and too impersonal - like a floating city – it had a main street with shops, bars and boutiques running the length of the inside. It had an ice rink, a theatre which accommodated about 1300 people, water-surfing and a rock-wall to scale amongst all the other entertainments which for me made it like a Butlin’s Holiday Camp on water.
But then I am a single traveller who prefers sailing to flying and goes cruising in order to enjoy the sea and the ports of call the ship visits.
It will be a smaller vessel next time - for sure.