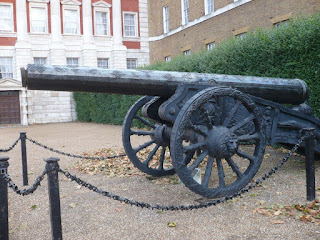 The Turkish Gun in Horse Guards Parade was captured by the British after the siege of Alexandria during the Napoleonic Wars, in 1801. It was transported to Horse Guards Parade (London) in 1802.
The barrel made in 1519 almost certainly saw action at the successful siege of Constantinople by the Ottoman Turks in 1543.
The embossed details on the barrel itself are wonderful but those on the carriage are even better, although the carriage was made later by J&E Hall, of Dartford in Kent.
The inscription on the barrel reads:
The Solomon of the age the Great Sultan Commander of the dragon guns (to be made) When they breathe roaring like thunder. May the enemy’s forts be raised (sic) to the ground. Year of Hegira 931.
Posted by M. C. Muir at 10:12 am

Constantinople was conquered by the Ottomans in 1453 no 1553