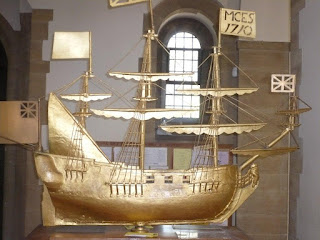 This beautiful Golden Barque weather vane ‘sailed’ on the cupola of the Portsmouth Cathedral from 1710 till it blew down in 1954. Lovingly restored, it now stands in the Cathedral while a golden replica adorns the tower.
Portsmouth Cathedral grew from a chapel built in 1185 dedicated to Thomas Becket (murdered 1170). During its 800 year history it suffered from French incendiary attacks during the 100 Years War (1337), Cromwellian cannon fire in the English Civil War (1642) and while the houses opposite were flattened in the WW11 bombing of Portsmouth, the Cathedral survived and was recently extended.
A gravestone within the Cathedral is the burial place for the remains of one of the sailors recovered from the Mary Rose – Henry V111’s ship which sank in 1545 in the Solent and was brought to the surface in 1984.
Posted by M. C. Muir at 8:25 am