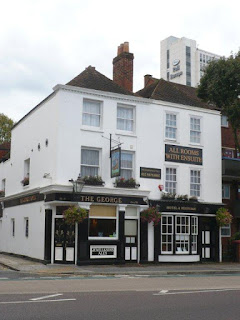 THE GEORGE HOTEL - When I visited Portsmouth a few weeks ago (from Australia), I made a special point of booking into The George Hotel – mentioned by Nelson in his letters and POB in his books. Located only a stone’s throw from the entrance to the Portsmouth Dockyard, I was disappointed to find this 18th century building was not the lodging house in question.
The original George Hotel, where on Se
pt 14, 1805, Nelson spent his last hours in England, fell victim to the WW11 bombings of Portsmouth. The inn, from which the Royal Mail and ‘Regulator’ left daily for London, was situated on High Street and backed onto Penny Lane. It was a stone’s throw from the Cathedral and only a few hundred yards from the Sally Port and Saluting Platform.
Today it is the site for a small block of flats but a plaque on the pavement and two gas lamps mark the entrance to the old George which was so popular with senior naval officers.
Posted by M. C. Muir at 9:06 am