A sea of cloud rolls in. 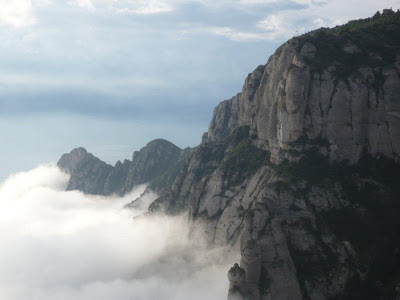 The Mountains at Montserrat in Spain is well known as the site of the Benedictine abbey, Santa Maria de Montserrat, which hosts the Virgin of Montserrat sanctuary and which is identified by some with the location of the Holy Grail in Arthurian myth. 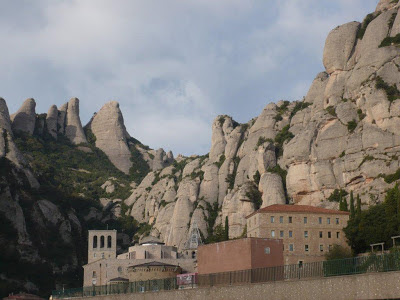 The Abbey can be reached by road, by the Aeri de Montserrat cable car, or by the Montserrat Rack Railway. The lower stations of both the rack railway and the cable car can be reached from Barcelona's Plaça d'Espanya station. From the abbey, the Funicular de Sant Joan funicular railway goes up to the top of the mountain, where there are various abandoned hovels in the cliff faces that were previously the abodes of reclusive monks, whilst the Funicular de Santa Cova descends to a shrine. http://en.wikipedia.org/wiki/Montserrat_(mountain) 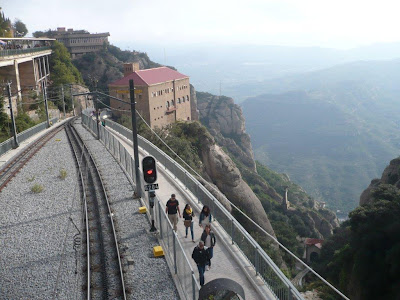 The Montserrat Rack Railway - Catalan: Cremallera de Montserrat, IPA: is a mountain railway line north of Barcelona in Catalonia, Spain. The line runs from Monistrol de Montserrat to the mountain-top monastery of Montserrat. The line is 5 km (3.1 mi) long and has a rail gauge of 1,000 mm (3 ft 3 3⁄8 in). The first 1 km (0.6 mi) of the line, between Monistrol and the only intermediate station at Monistrol Vila, is operated by conventional adhesion. The remainder of the line is operated as a rack railway using the Abt system, overcoming a height difference of 550 m (1,804 ft) with a maximum gradient of 15.6%. The line is electrified with an overhead supply at 1500 V DC.
The line is operated by the Ferrocarrils de la Generalitat de Catalunya (FGC).[1]

While the pics are my originals (Oct, 2012) the detailed information is coutesy of Wikipedia.
Posted by M. C. Muir at 12:49 pm

Thank you for your link
MM

Dhansingh Gurung said...
This comment has been removed by a blog administrator.
10:03 pm

Adventure Everest Team said...
This comment has been removed by a blog administrator.
2:06 pm

Namaste Dear Visitor, we are web design and development team of Ganesh Himal Technology Web Designing Company in Nepal. we are base Location at khusibu, Kathmandu Nepal. Nepal Under Government License holder Web Development Company in Kathmandu. So we start our business since 2008 to till as regular service to Web Designing, Web Development, Domain Registration, Web hosting, Content Writing and SEO Services for Trekking Agency, Hotel, Main Power, Collage, Consultancy, NGO and INGO many others sector. We have a Professional Team of Web Designer and Developer over 12 Years of hard work with the latest technology to development. not only competition local The the market we have the best services worldwide. which is more popular and new technology. So Ganesh Himal Technology serviceWeb Designing in Nepal. and Web Development in Nepal. and also Content writing in Nepal. and Domain registration, Web Hosting in Nepal. Mobile App Development as Android and IOS. we are using to Getaway Payment system E-commerce Solution for Online Payment. So if anyone interest to Web Design in Nepal. Please, no need hesitate to talk and enquiry. this is our official Cell no:+977-9843467921 and Email: info@ganeshhimaltech.com and Website: www.ganeshhimaltech.com