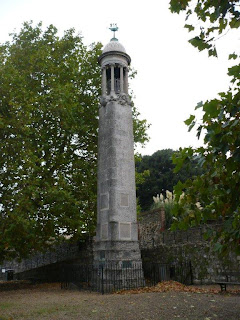 This PILGRIM FATHERS MEMORIAL is in Southampton, England.
The plaque read: The Separatist congregation from Babworth, Nottinghamshire (1586-1604), which moved to Scrooby in 1606, to Amsterdam, Netherlands, in 1608, and to Leyden in 1609, sailed from Delft Haven in the SPEEDWELL, ON August 1, 1620, to join the MAYFLOWER with its London colonists, here. Both ships sailed on August 15, 1620, for the New World. After turning back to Dartmouth, and a second time to Plymouth for repairs, the SPEEDWELL was abandoned and on September 16, the MAYFLOWER alone sailed to Plymouth, New England with 102 passengers.