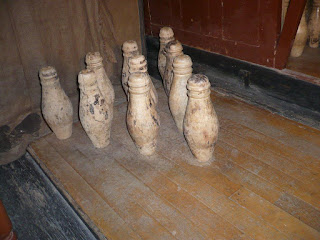 In the undercroft of the Greenwich Royal Hospital for Seamen is a Games Room. It was built in 1860 to provide entertainment for the old sailors.
The lanes of the alley were made from decking planks taken from sailing ships at the Deptford dockyard. The skittles are belaying pins (around which the ship's lines are fastened) and the bowling balls are practice cannon balls made from lignum vitae – a hardwood used for making ship’s blocks.
The Skittle Alley was only used for a few years by in-patients, because the Hospital closed in 1869, however, it was made use of for 125 years till 1997 by members of the Royal Naval College.
Posted by M. C. Muir at 10:02 am

So interesting to learn how they reused materials from their working lives to make this alley.