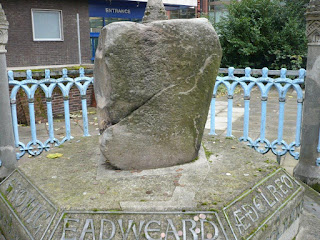 This uninspiring chunk of greywether sandstone was used during the coronation ceremony of six Saxon Kings between the year 900 and 979 AD – Edward the Elder, Athelstan, Edmund, Edred, Edwy, Edward the Martyr and Ethelred the Unready. It can be found a few yards from the river at Kingston-upon-Thames where the coronations took place.
The stone was first mentioned in print in 1627 by John Speed who wrote: AT KINGSTON LIKEWISE STOOD THE CHAIR OF MAJESTY WHEREUPON ATHELSTAN, EDWIN AND ETHELRED SATE AT THEIR CORONATIONS AND THERE RECEIVED THEIR SCEPTER OF IMPERIAL POWER.
The stone is mounted on a heptagonal base bearing the king’s names. The ornamental Saxon-type railing with seven spear heads was designed in 1850.
Posted by M. C. Muir at 10:06 am