HMS Victory stripped to the bone 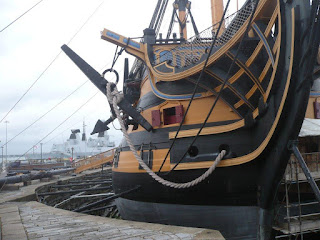 This pic shows the bulbous shape of Victory's hull and if you look closely on the port side you can see some of the original timbers dating back to the mid 1700s.
Over the years much of the ship has been replaced and rebuilt but deep within the vessel it's easy to pick the timbers which are originals. 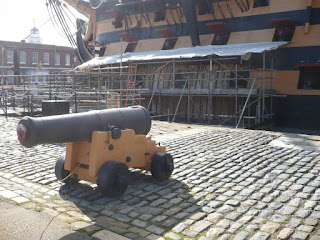 In her present state of undress, HMS Victory modestly hides her undergarments!
Beneath the awning it is obvious the outer planking has been removed from the hull on the larboard side. What you can presently see are original timbers from the time Victory was built at Chatham.
"The order for the Victory to be built at Chatham was signed by the Navy Board on the 7th July 1759. Work started almost immediately and the first timbers, those for the keel were brought together at the Old Single Dock on the 23rd July 1759 .
Once her frame was complete she was left to ‘season in frame’ - a process that would normally take six to twelve months - but in the case of Victory lasted for many years - until the Seven Years War had ended - Launched on 7th May 1765 she was completed and fitted out - not for war but for the reserve fleet." (Chatham Historic Dockyard website).
Posted by M. C. Muir at 11:17 am