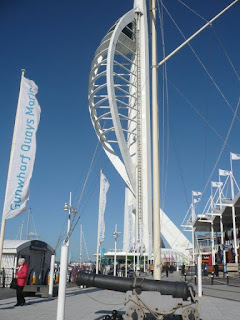 Dwarfed by the Spinnaker Tower on Gunwharf Quay, this gun is a Royal Naval 12 pounder forged in 1810. It is one of the oldest guns in the world which is still fired regularly. Originally mounted on the deck of a man-of-war, it was capable of firing up to 1421 yards. It needed a crew of 8 men and on board would have been served by a ‘powder monkey’ who delivered the cartridges from the magazine. 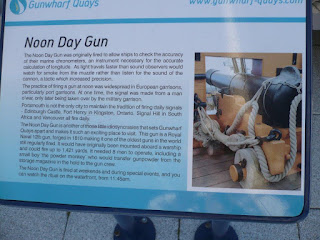 As light travels faster than sound, observers of the noon time signal would watch for the smoke from the muzzle rather than listening to the sound of the cannon.
Several cities around the world which maintains the tradition of firing daily signals including Edinburgh Castle, Fort Henry in Kingston, Ontario, Signal Hill in South Africa and Vancouver