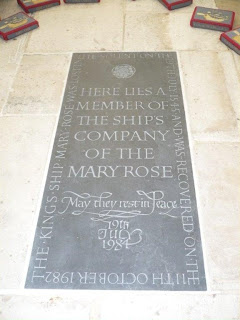 When Henry V111's ship, MARY ROSE was receovered from The Solent in 1982, the bodies of numerous sailors (and a dog) were recovered from the wreck. Many of these have been preserved and/or been subjected to forensic tests to ascertain more about life in the 16th century.
The remains of one sailor however was interred at Portsmouth Cathedral - about a mile from the dockyard an quite close to the Sally Port and Portsea Beach from which Henry V111 watched his flag ship go down in 1545.
It seem fitting that there is a grave to one of the men who lost their lives on that fateful day so long ago. 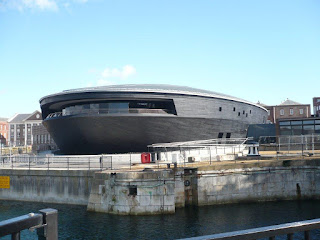 This is the new Mary Rose Museum building which will be opening in 2013. I was pleased that I saw the ship undergoing its restoration process a few years ago.
Situated in the Portsmouth Historic Dockyard, I was standing close to HMS Victory.
Posted by M. C. Muir at 8:43 am