The LEAGUER and NELSON’S BODY 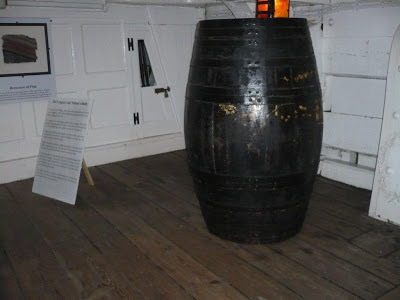 Nelson was not the only senior officer to return to England in a barrel.
“The large barrel standing at the ship’s side represents the original water leaguer in which Nelson’s body was contained for its journey back to England for burial.
To preserve the body, Surgeon Beatty had the leaguer filled with brandy. Although carried in the ship as an alcoholic drink, brandy was the best available spirituous solution suitable for this purpose.
Under tow by the 98 gun ship ‘Neptune’, the ‘Victory’ finally anchored at Gibraltar one week after the battle.
Beatty used this opportunity to dilute the brandy with preservation fluids comprising spirits of wine and myrrh. The leaguer was then placed in the steerage and lashed secure to the mizzen mast.
The ‘Victory' sailed home Monday 4th November and anchored off Portsmouth Thursday 5 December. Arriving off Sheerness 18 days later, Nelson’s body was transferred into its coffin and taken up river in the Chatham yacht to Greenwich where Beatty found the body in a good state of preservation.
The idea of preserving a body in a cask of brandy was not just done for Nelson but was the accepted common practice for preserving senior naval officers who dies at sea.”