The Trafalgar sail - from HMS Victory 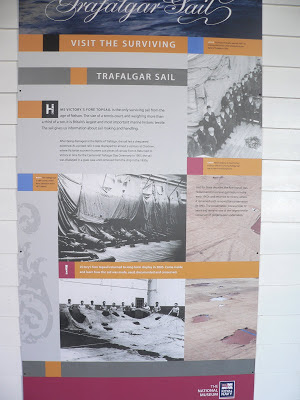 Note: This post was published in 2012. I have now updated it (Oct 2014) and the revised and improved post is at the link "Trafalgar Sail - a legacy of the Battle".
Thank you
Margaret Muir

The Trafalgar Sail – Britain’s most important maritime textile – the fore-topsail from Nelson’s HMS VICTORY’s
For me the most poignant artefact held at the Portsmouth Historic Dockyard is this immense sail. Damaged at the Battle Trafalgar (1805), it reveals the holes made by French cannon balls during the famous sea battle.
It is enormous - the size of a tennis court and weighs more than a third of a ton. Taking up the whole top floor of one of the buildings, perhaps only a third of the sail is visible. Unfortunatley, photography was not permitted, so I can only show a copy of the poster describing it – but I stood within a meter of it and was awe-inspired at its sheer size and history.
For 100 years during the 19th century it was displayed at Chatham but for 30 years of the 20th century it was stored and ‘lost’.
In 1993, however, conservation work began which lasted 12 years. Today it is regarded as Britain’s most important maritime textile which provides information on sail making in the Nelson era.

I should add:
Ninety holes in one sail
The Trafalgar Sail – HMS VICTORY’s fore-topsail is held at the Portsmouth Historic Dockyard.
Damaged at the Battle Trafalgar, it is pock-marked with 90 shot holes
It is enormous - the size of a tennis court and weighs more than a third of a ton. (Measures 24m at the foot, 17m at the top and was 16m deep = 323 sq m). The canvas was made from flax - Scottish flax being the best available. The canvas was woven on hand looms. (information gathered from the Portsmouth Historic Dockyard).
Today it is regarded as Britain’s most important maritime textiles.