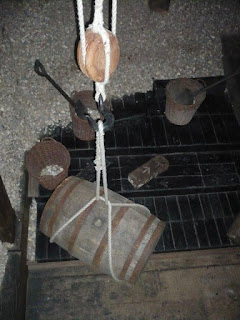 To counteract the weight of 100 cannon on her gun decks, 257 ton (259 tonnes) of pig iron ballast was laid in the bottom of Victory's hold. This was overlaid with loose shingle which formed the base for storage of water butts and leaguers. When fully provisioned for a 6 month voyage she carried 300 tons of water.
While Victory now rests in dry dock, only a facsimile of the layer of pig iron can be shown, however, two real pig iron ballast blocks, bearing the mark of an arrow, are presented.

The pig-iron ballast also played an important role in Cook's ship.
Apart from forfeiting the guns, it was blocks of pig-iron ballast which were thrown overboard on the Great Barrier reef from Captain Cook's Bark Endeavour.
This allowed the vessel to float free of the coral and sail to Batavia for repairs. A piece of the original pig iron, recovered from the sea at Endeavour Reef in recent years, is now a permanent exhibit on HMB Endeavour.
Posted by M. C. Muir at 10:11 am