Despite the ageing volcanic peaks of São Miguel being shrouded in mist, I was anxious to see all I could of this exotic location during my brief visit to the Azores.
Situated 900 miles west of Lisbon and once thought to be the remains of Atlantis. The group of nine islands was originally known as the The Western Isles. 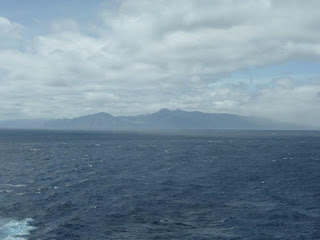 The name, Azores, derived from the colonies of hawks (actually buzzards) that were the first inhabitants. The islands belong to Portugal.
In the early days, the French included the Azores in a group they called les isles fortunées, and it was two of the islands of this group that I used as the settings for my latest book – the fourth in the Oliver Quintrell nautical fiction series. I titled it “The Unfortunate Isles”. When writing the story two years ago, I relied entirely on research, mainly from the internet. 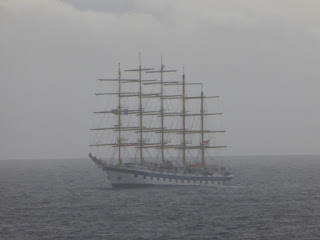 It seemed fitting that as the cruise ship I was on was entering the harbour, I saw a tall ship emerge from the mist. Of course, it wasn’t a naval frigate from the Napoleonic era, but the Royal Clipper of the Star Clippers’ line. 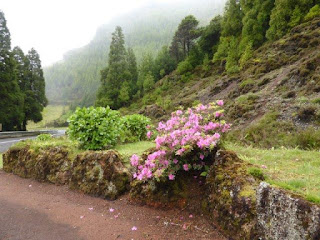 São Miguel, the largest of the islands and home to the capital, Ponta Delgada, is also known as the green island. The damp atmosphere and rich volcanic soil make for very lush and productive farmland. The hydrangeas, which grow in profusion along the road verges, were ready to burst into flower. Azaleas, too, were among the many flowers of the island. 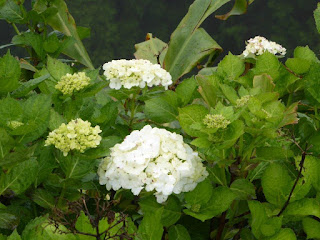 The distinctive features of the old Portuguese settlement are found in the architecture with the contrast of black and white stones in the old buildings, especially the churches. 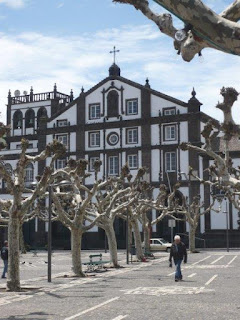 The geometric patterns of mosaics in the courtyards and along the pathways are made up of thousands of pieces of volcanic rock. They are just as I expected them to be. 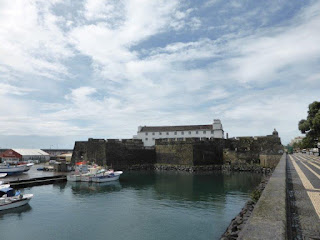 The old wharf of 1804 has disappeared but the fort is still standing at the western end of the port, and the city’s entrance gate is spectacular. 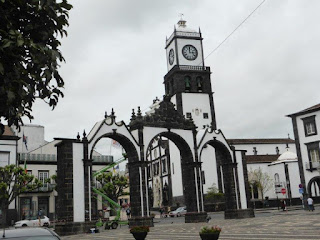 Sadly my journey to see the Green and Blue Lakes in the mountains was wasted as the mountain top was covered in mist. This picture is taken from a postcard. I did, however, glimpse the rugged coast line of the north and west of the island. This confirmed how difficult it would have been, in the days of sail, for vessels to enter some of the bays. 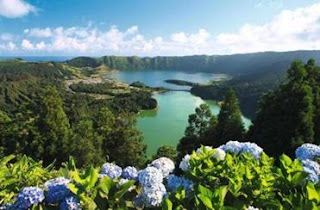 Having written “The Unfortunate Isles” using only research material, it was reassuring on visiting São Miguel to find that what I had described was relative accurate, taking into account the time frame of the novel was the early 1800s. 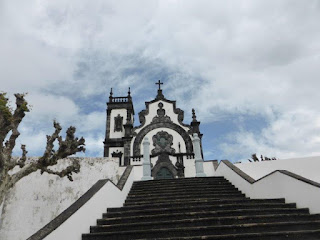 But I must admit to a strange experience when I was in the town square. I had the distinct feeling that Oliver Quintrell had walked over the same ground before me. Interesting. It goes to show how deeply an author becomes involved with his/her characters. 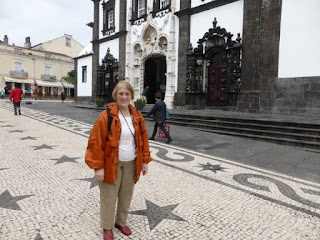 Next stop on my journey – Lisbon.

Note: "The Unfortunate Isles" is available from Amazon as an e-book or in paperback