Queen Victoria was so grief-stricken by the death Prince Albert that she fell into a period of mourning until her own death in 1901 – a period of 40 years.
Not only did she adopt the outward vestiges of widow’s weeds (from the Old English "waed" meaning "garment") but she insisted every member of her court wear mourning for the next three years. Females of the court were only permitted jewellery made from jet during the next 12 months.
Following Queen Victoria’s example in 1861, black mourning jewellery became fashionable throughout the country. Besides being a sign of grief, due to its cost, jet was also worn as a sign of status or wealth.

Whitby Jet (a form of lignite) is a fossilized precursor to coal. It has a metallic lustre and is regarded as a minor gemstone. Like coal, it was laid down millions of years ago from decomposing forests. Jet originates from wood of the family of Monkey Puzzle Tree – a type of pine tree.

This stone when polished: “has been used in Britain since the Neolithic period but the earliest known object is a 10,000 BC model of a damsel fly larva, from Baden-Württemberg, Germany. Jet continued in use in Britain through the Bronze Age, where it was used for necklace beads.
Whitby Jet was popular in Roman Britain from the third century onwards. Initially discovered in and around York, it was used in rings, hair pins, beads, bracelets, bangles, necklaces and pendants.”
Over the centuries, it was traditionally made into rosaries for monks.
Because of its perceived magical qualities, jet was also used in Roman Britain to ward off the gaze of the evil eye.” Perhaps it failed to serve that purpose, because the end of the Roman era in Britain coincided with the end of jet's ancient popularity.

It was not until Prince Albert’s death that its popularity re-surfaced. Today we use the term jet-black without thinking of its sombre Victorian connections.

When I visited Whitby last month and wandered along Church Street, I was surprised at the number of Jewellery shops specializing’s in items made from polished Jet.

Having been bequeathed a jet brooch from an Aunt who died over 40 years ago and having never worn it, I decided to find out what it might be worth. 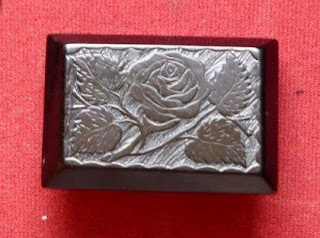 The rectangular brooch (see above) is polished and bears the delicate engraving of a Yorkshire Rose on the face (in the photo the flash has highlighted the design but in natural light it is barely visible).
The silver clasp on the back is similar to one I saw in a Whitby shop dealing in antique pieces. I concluded that the brooch is a piece of Victorian (possibly mourning) jewellery. The similar item was priced at £450.00 (around $900).

When the shop assistant told me Whitby Jet dates back to the early Jurassic Age and is 182 million years old, I realized my piece of Jet deserved my respect.

Whitby jet jewellery-We are a small company that produces handcrafted jet jewellery from our workshop in Whitby, North Yorkshire. We only use the best quality Whitby jet which we either collect ourselves or source from one of a handful of trusted local collectors. This means we know the origin of every piece of jet before it is cut and polished.