The modern replica of the submarine Ictíneo 1 can be found near the entrance to the Maritime Museum in Barcelona.

From the two similar pictures I have taken (2012 and 2015), it would appear that the submarine has undergone an exterior facelift during the past three years.
According to the plaque - this replica of Ictíneo 1 designed by Narcis Monturiol was built by Drassanes Dalmau.

Facts: “Monturiol named his vessel Ictíneo, from the ancient Greek icthus (fish) and naus (boat). As he put it, the Ictíneo’s form is that of a fish, and like a fish it has its motor in the tail, fins to control its direction, and swimming bladders and ballast to maintain an equilibrium with the water from the moment it submerges".

Following construction in 1859, Monturiol and two crew performed more than 20 test dives in Ictíneo 1 reaching 20 meters (66ft) in depth. He was able to maintain the dives for about 2 hours breathing only the air sealed within the hull but was able to double this time by using compressed oxygen. Monturiol invented a chemical means of removing carbon dioxide from the interior. 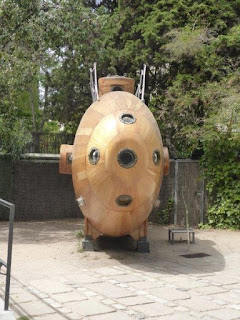 “For interior illumination he used a simple candle, which had the advantage of turning red when oxygen was beginning to run low.” His only source of power was hand-cranked propellers.
Sadly, Ictíneo 1 was destroyed when hit by a ship while at its berth.

You can read more about Monturiol’s remarkable machine on the web page from which much of this information was sourced.
http://en.wikipedia.org/wiki/Ictineo_I
Posted by M. C. Muir at 11:32 am