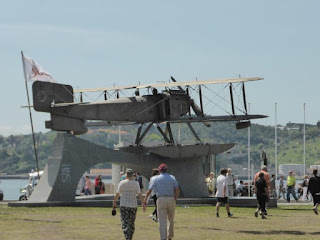 An exact replica of the Santa Cruz, the third of three Fairey 111 bi-planes, used to make the first ever aerial crossing of the South Atlantic in 1922, stands next to the Belem Tower on the banks of the Tagus River in Lisbon, close to the spot where the flight took off from. 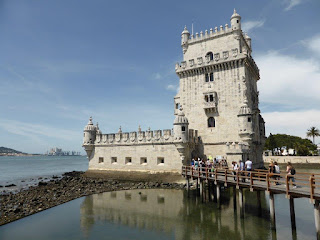 The Portuguese pilots Gago Coutinho along with Sacadura Cabral, were the first to fly across the South Atlantic Ocean a distance of 8,383km (5,209 mi). They took off from Lisbon on the 24 March 1922 and arrived in Rio de Janeiro 79 days later on the 6th June 1922 – although the actual flight time was only 62 hours and 26 minutes. 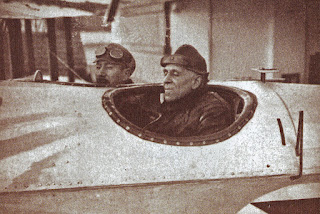 Because the sea-plane was not capable of carrying sufficient fuel for the long journey, it had to stop and refuel several times along the way. One purpose of the flight was to test some new aerial technology – the artificial horizon device. 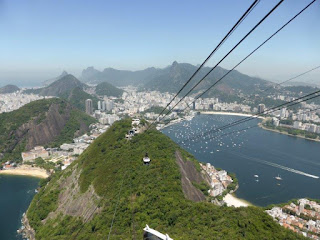 When the pilots reached the coast of Brazil they were twice forced down by bad weather and had to ditch in the ocean. When rescue arrived, word went out for a replacement plane. With a similar aircraft (named the Santa Cruz) the aviators were able to continue their flight to Rio de Janeiro where they ditched in Guanabara Bay.
...
Pic of plane and Tower taken during my recent visit to Lisbon.
Pic of Rio de Janeiro (2013)
Pics of Gago Coutinho e Sacadura Cabral is a public domain image
Posted by M. C. Muir at 1:12 pm