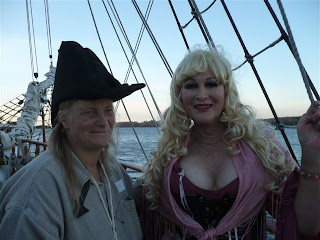 I’d only been on board as a tourist for half and hour when I was invited to join the Tasmanian Sail Training Association and join the Lady Nelson as a volunteer crew member.
Perhaps the fact that I had sailed previously on the STS Leeuwin out of Fremantle had some bearing.
I don’t know. But the idea appealed to me.
I was to help for three days while the ship was in the Tamar Valley and away from its home port.
I signed on.
Talking to the groups of tourists on short cruises on the river was not daunting.

For three days there was a mixture of charter groups – school kids, seniors’ groups, the Dragon Boat ladies and the ABC Radio, who did a broadcast from the ship.
Some of the passengers even joined the Captain in dressing for the occasion.
Ashley and Sue were the centre of attraction during the ABC presentation. Both in period dress.
Throughout the cruises, ship's cook Viv pumped out sea shanties on her accordian, the passengers sang along, and despite the lack of wind it was an unforgettable trip.

Photo: Captain Mal and passengers create and image of the past
Posted by M. C. Muir at 9:46 am