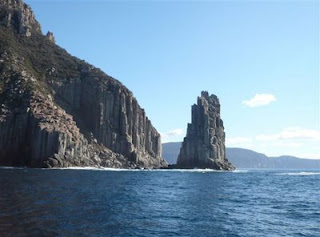 From Cape Hauy to Cape Pillar the scenery got even better.
Ahead was the bottom corner of Tasmania with Tasman Island sitting like a full stop at the end of the line.
A channel runs between the island and the cape.
As we entered we could see a change in the sea ahead.
Half way through and we could feel the sea rising.
And as we emerged we were lifted by a near 4 meter swell with an angry sea running above it and dashing itself against the formidable cliffs. 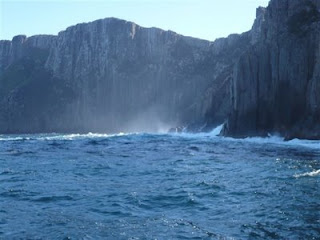 The Lady Nelson pitched and heeled and waves broke over the bow, washing the deck and pouring from the scuppers.
Everyone was harnessed and clipped on. 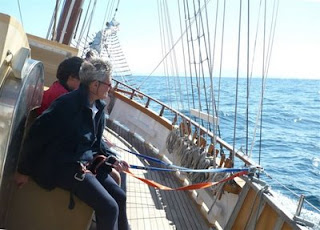 This is sailing at its best!
The long swell reminded me of the Atlantic rollers and I loved every minute of it.
Ahead was Cape Raoul.
To the north the entrance to Port Arthur but there was no time to pay a visit.
The Lady Nelson rode the waves bravely as she rounded the dragon-like headland of Cape Raoul. 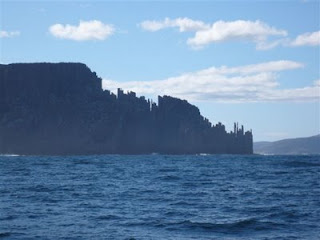 Ahead was open water and a four hour sail across Storm Bay.
The Lady heeled over with every passing swell.
From there we headed south down the D’Entrecasteaux Channel to take advantage of the shelter of Bruny Island for the final night.

Photos: The Cape Pillar, the boiling sea of Malingon Bay and Cape Paoul
Posted by M. C. Muir at 10:42 am