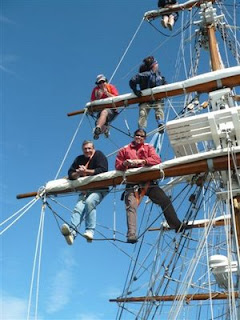 This remarkable land and sea endurance race is named after a race in UK.
The Tasmanian version however is an ultra marathon event for both boat crews and runners.
The sailors must navigate around half the inhospitable coast of Tasmania and combat the turbulent seas of Bass Strait and Storm Bay with the winds of the Roaring Forties to contend with.
For the runners there are three peaks to climb – Mt Strzelecki on Flinders Island, The Hazards on the Freycinet Peninsula and finally Mt Wellington at Hobart (which a week before was decked in snow).
A truly ultra marathon event!
The starting gun was fired at 2.pm on Good Friday and that afternoon the fleet with The Lady Nelson following them sailed out of the mouth of the Tamar River and onto the choppy waters of Bass Strait.
The assorted sailing craft were heading for Flinders Island.
The Lady Nelson was making for the light on Swan Island at the North eastern tip of Tasmania. 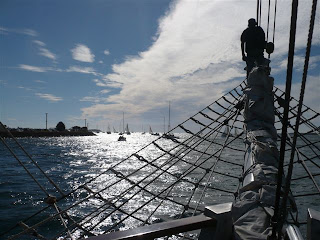 By evening the seas were boiling.
It was rough and I was too sick to go below to my bunk.
And it was a long cold night on the open deck of small ship.
I can only imagine how much discomfort the early sailors and their passengers suffered without the advantage of thermal underwear and wet-weather gear.

Pics: The Crew dress the ship as she sails past the start line.
Lady Nelson sails from the River Tamar out to Bass Strait
Posted by M. C. Muir at 9:55 am