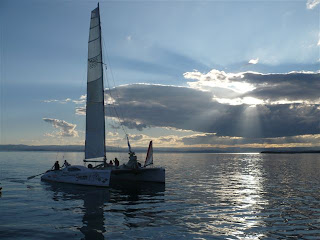 After a day and night at sea, I left the deck at 4.00am as we were sailing through the Schouten Passage.
Two hours later I was woken by the sound of the anchor dropping in Coles Bay.
Overnight nothing had been seen of the race entrants.
It was Easter Sunday and the Easter Bunny had just delivered Easter eggs to every bunk when the first boat in the race entered the Bay.
It was the multihulled, Slingshot of Neil Buckby Motors Subaru.
According to the rules of the race, the competing boats are not allowed to use their motors, and with a lack of hardly any wind the crew had to resort to rowing.
It was no easy task for a boat of that size.
As soon as the boat docked at the wharf, the two designated runners were off over the Hazards and heading up Mr Freycinet. 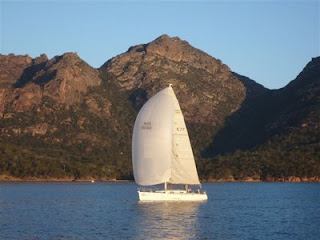 Slingshot was about two hours ahead of her next rival.

Pics: Slingshot crew row their boat into Coles Bay.
Another yacht sails in
Posted by M. C. Muir at 10:10 am