The Portsmouth Road aka The Sailors' Highway 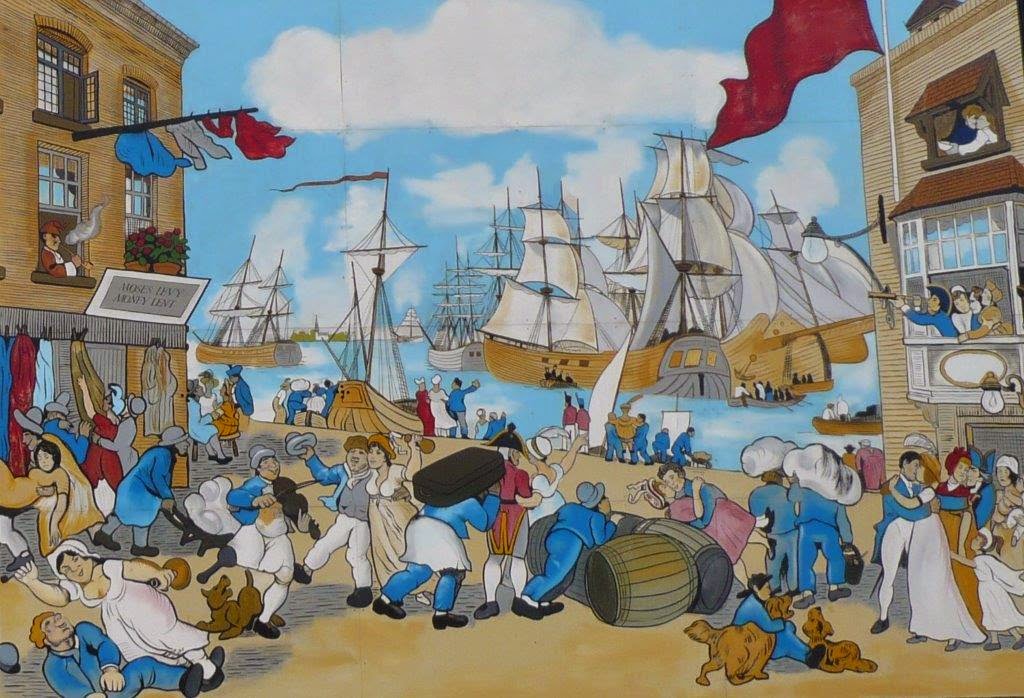 Old Portsmouth - Thomas Rowlandson the British caricaturist (1756–1827)
The Portsmouth road was the direct link between London and England’s greatest naval port and, because it was frequented by seaman from foremast Jacks to Admirals, it was dubbed The Sailors' Highway.

In 1805, there was no glamour or romance attached to coach travel. Being ‘cabin’d, cribb’d or confin’d’ in a wooden box on wheels that rolled, pitched and creaked like a ship at sea, and being ‘hauled by four horses, charging along an uneven road at the breakneck-speed of 8 mph’, was regarded as an evil best avoided.


But for those who were obliged to travel, the tedious journey began at Stone’s End (Southwark) – literally the place where the paved streets of the London Borough ended and the unmetalled country roads began. The distance of 71 miles and 7 furlongs was interrupted by six toll-houses and turnpike bars, and at least one stop at a coaching inn for a change of horses, and a chance for the passengers to eat a meal and catch a little sleep. 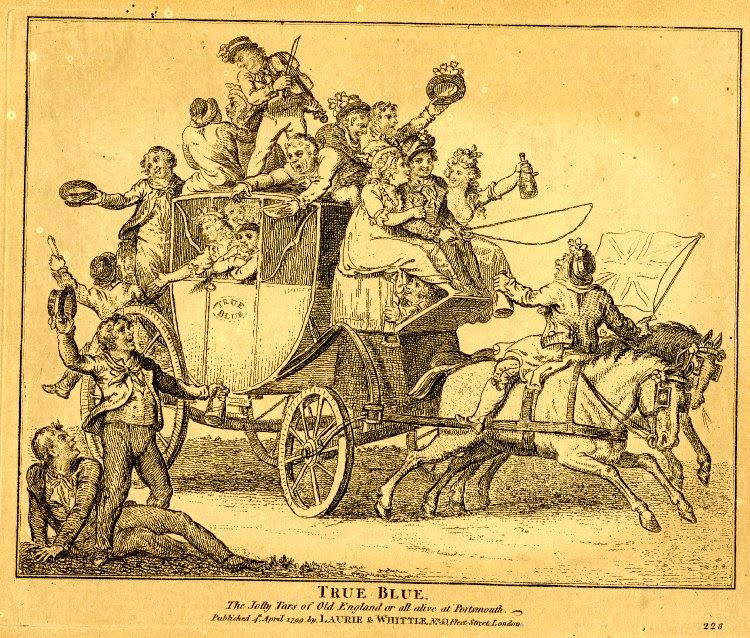 'The Jolly Tars of Old England’ Cruickshank
While images such as those of caricaturist, Isaac Cruickshank represent a jolly coach load of inebriated passengers, the biting cold, the inclement weather and the likelihood of falling in with thieves and robbers along the way dulled many a spirit.


Passenger had little choice but to accept the various minor miseries of the journey. For example, it was not unusual to arrive at the coach, having booked a seat in advance, only to find the coach full. Also, having to ‘ease the horses’ at the bottom of a steep hill, meant getting out and walking. And if driving through torrential rain, it was not unusual for an passenger seated outside, who was dripping wet, to take shelter by climbing into the already crowded cabin. The bad language and aggressive behaviour of drunks and beggars, who descended on the coach when it arrived at a coaching stop, could not be avoided. 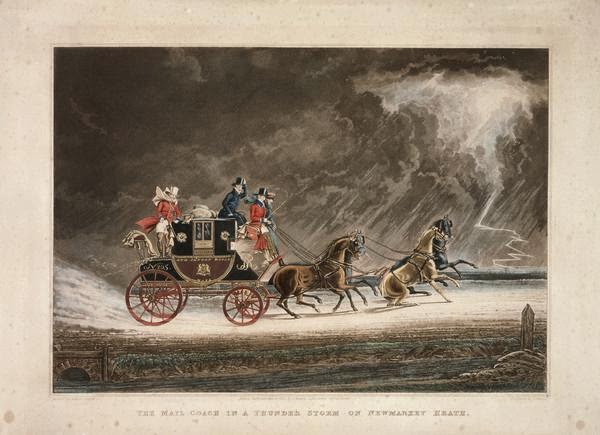 The Royal Mail coach in a thunderstorm - James Pollard - 1827

Prior to 1784 and the establishment of mail coaches, the journey from London to Portsmouth took 14 hours – depending on the condition of the road. But from the turn of the century, services increased and several coaches departed London every day including the Regulator, which left at 8 am and reached Portsmouth at five in the afternoon. The Rocket and Light Post also travelled in daylight. The Royal Mail, picked up passengers at The Angel in the Strand at 7.15 pm and arrived, ‘with God’s good Grace’ at The George in Portsmouth at 6.10 the following morning. The Night Post coach, as its name indicated, also travelled through the night.


Of the hundreds of naval officers and common sailors heading to the seaport to join a ship, admirals and captains usually made use of their private carriages or hired a post chaise. These conveyances not only allowed for faster travel but offered a greater degree of privacy and comfort than the regular services. It also allowed the passenger to decide which inn he wished to stop at along the way. Lower ranked naval officers travelled by the regular coaches, whereas common sailors often covered the distance on foot or in the back of an open stage-wagon hauled by eight horses. These conveyances took three days to cover the 72 miles travelling with the ‘tripping step of a tortoise’.


Breaking the journey at a coaching house such as The Anchor (later renamed The Royal Anchor) at Liphook offered the opportunity for a meal and a bed for those who could afford it. For sailors, clean straw on the floor of the outhouses was made available.
But apart from the minor discomforts, journeying along the Portsmouth Road was considered a dangerous venture especially if travelling at night. Because of the fear factor, fellow passengers regarded each other suspiciously and sat ‘glum and nervous – with their money in their boots, their watches in the lining of their hats, and other light valuables secreted in unlikely parts of their persons, in the fond hope that the fine fellow, mounted on a mettlesome horse, and bristling with weapons, who would presently bring the coach to a stop in some gloomy bend of the road, might be either too unpractised or in too great a hurry to think of those very obvious hiding-places.’ 'Rogues 1883' by F.Dodd 1859-1929 from Illustrated London News
The threat of the rope’s end did little to deter the highwaymen, who, since the 17th century, had preyed on coaches travelling the lonely roads after nightfall. Sitting in the mail-coach’s dickey seat, the guard was armed with a musket, sword or blunderbuss.


Those passengers seated up-top were afforded the best views and when the coach neared Portsmouth, the sight of the British fleet at anchor would serve to remind them of what lay ahead. Occasionally, however, due to his excited or inebriated state, a sailor would tumble from the coach and break his leg, head, or arm, but that, in the circumstances, was not unexpected. 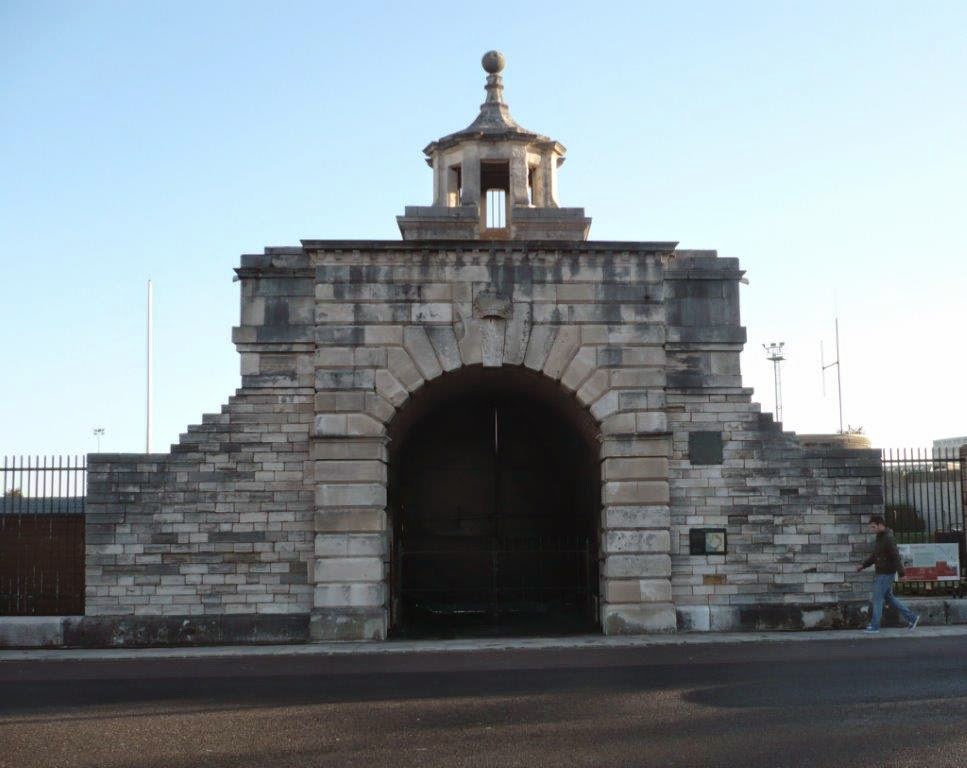 The Landport Gate
Arriving safely at the Landport Gate in the early hours of the morning, passengers breathed a sigh of relief – though perhaps it was unwise to inhale too deeply! Being a fortified town, the entry points to Portsmouth were locked every night from midnight to 4.00 am, so if the London coach arrived at that hour it would be obliged to wait for a line of night-soil wagons to pass out of the gate before it could enter.


On 14th September, 1805, the post chaise carrying Admiral Lord Nelson drove through the Landport Gate and allowed him to alight at The George on High Street at 6.00 am. From there the coach continued for a further mile through the streets to its final destination at Victoria Pier.
After eating breakfast at The George, Lord Nelson proceeded to the naval dockyard where he spent several hours assessing the ships being readied for sea and visiting the Block Mill (http://goo.gl/vYI0ba ). 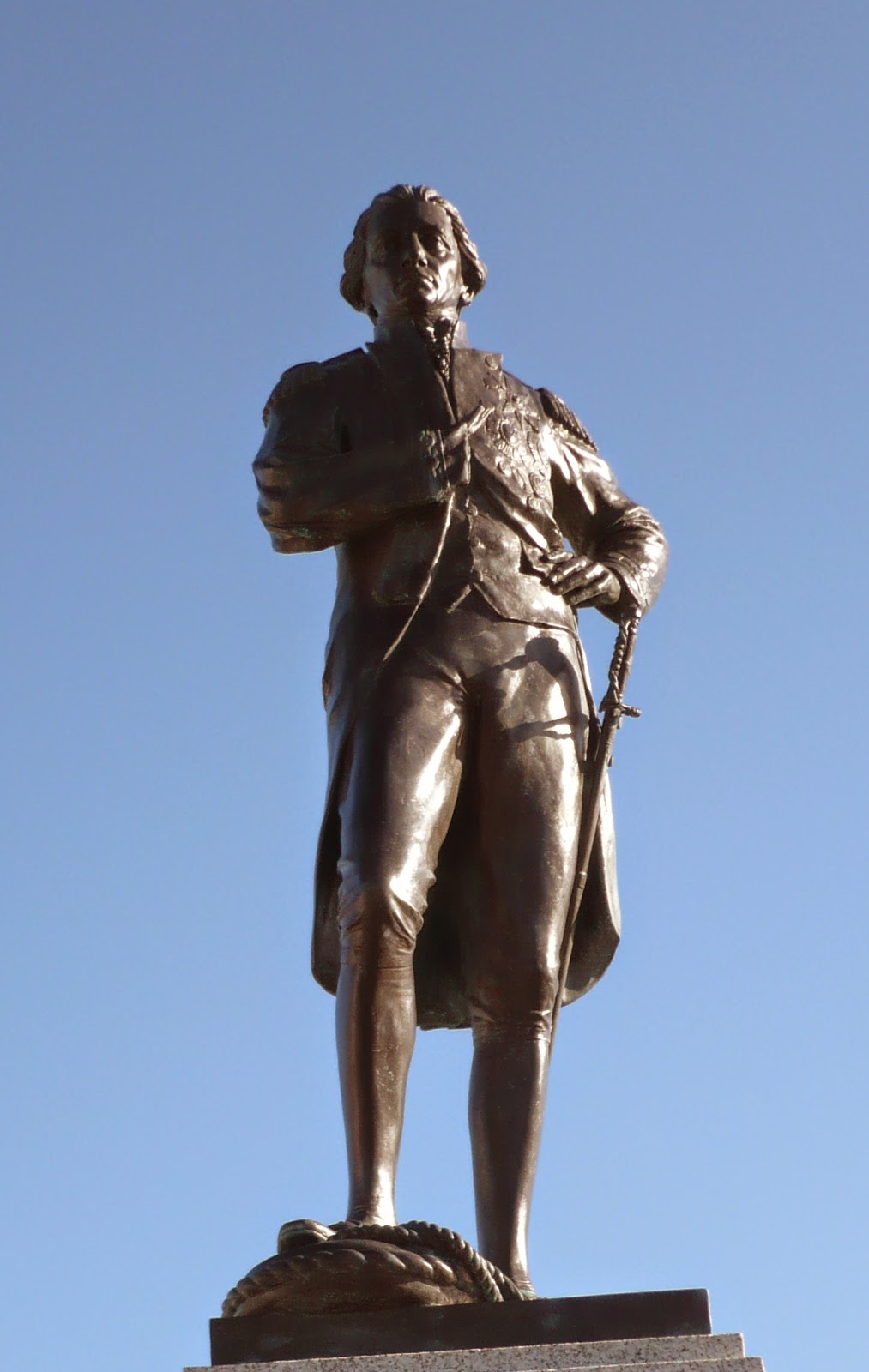 Lord Nelson statue- Portsmouth
Nelson’s journey from his home at Merton in south London was the last coach journey he ever took. At 2.00 o’clock that afternoon, he was rowed across Spithead to St Helens where he climbed aboard HMS Victory, the ship that would carry him to his final fateful battle at Trafalgar.


References: The Project Gutenberg EBook of “The Portsmouth Road and Its Tributaries”, by Charles G. Harper, 1895 AND “The Story of Nelson’s Portsmouth” by Jane Smith
Note: This blog post, by Margaret Muir, first appeared on the pages of English Historical Fiction Authors thanks to Deborah Brown

Hopping over from the FB post in the historical fic group!

This was a really fascinating read. And as I read I could imagine what a hilarious, frustrating, and sometimes frightening experience it must have been to ride along the Portsmouth Road. It's actually my first time hearing of this, as much of my research takes place far for Portsmouth. So thanks so much for sharing!