THE TRAFALGAR SAIL - a legacy of the Battle 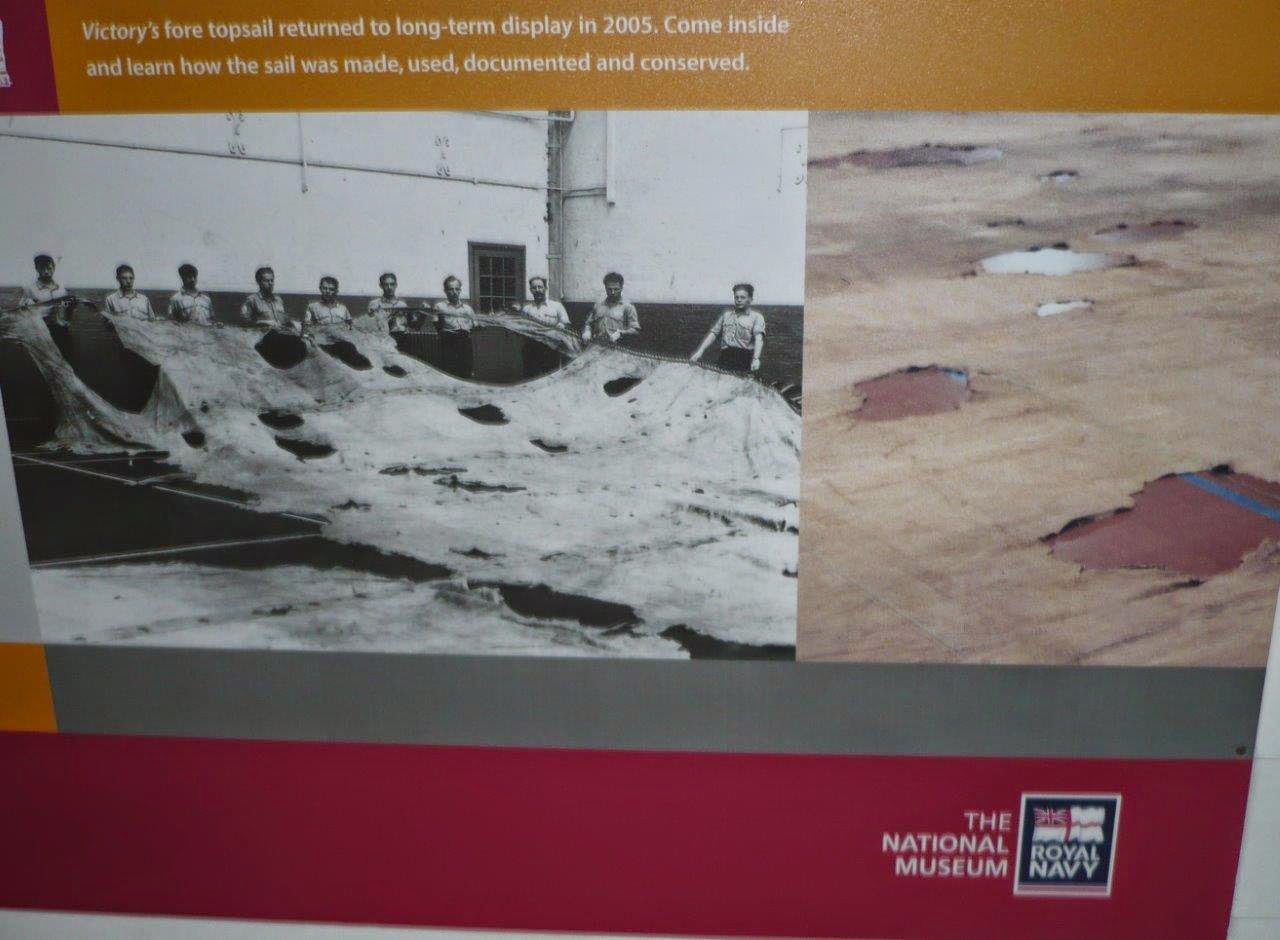 Referred to as The Trafalgar Sail, HMS Victory’s foretopsail (the second largest on the ship’s 37 sails) is the largest single surviving object from the Battle of Trafalgar (apart from the ship itself). It reveals the 90 shot holes it suffered on 21st October, 1805. 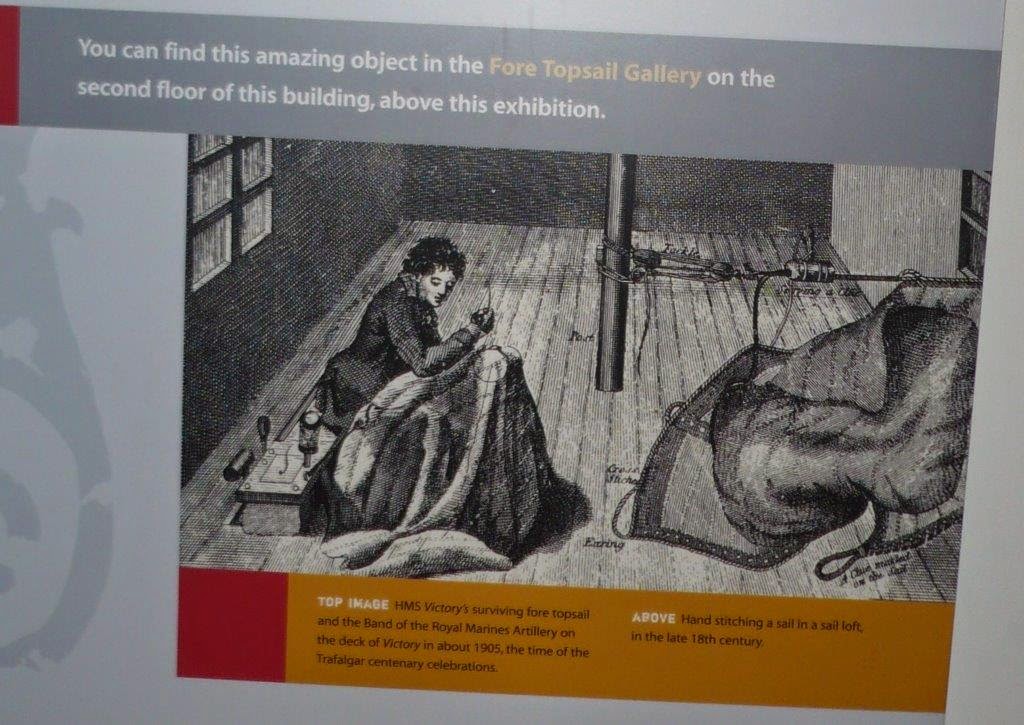 Though Victory was launched in 1765, the sail was only two years old, having been made at Chatham in 1803. It would have taken around 1,200 man-hours for the sailmakers to stitch it. Measuring the size of a tennis court (80ft at its base, 54ft at its head and 54ft deep), it weighs a third of a ton. Following the immense damage the ship sustained at the Battle of Trafalgar, HMS Victory was towed into Gibraltar for temporary repairs. After a week, she was returned to Portsmouth and later to the Chatham Dockyard for a complete refit. Here, the sail remained and was displayed at the yard for almost a century before being returned to the ship in 1905. 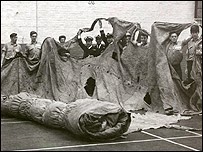 After becoming lost for three decades, the dilapidated sail was re-discovered in 1962 in a naval gymnasium hidden beneath a pile of mats. It was returned to Victory but signs of deterioration were evident and a decision to preserve it was made. Conservation began in 1993, a process which took twelve years. 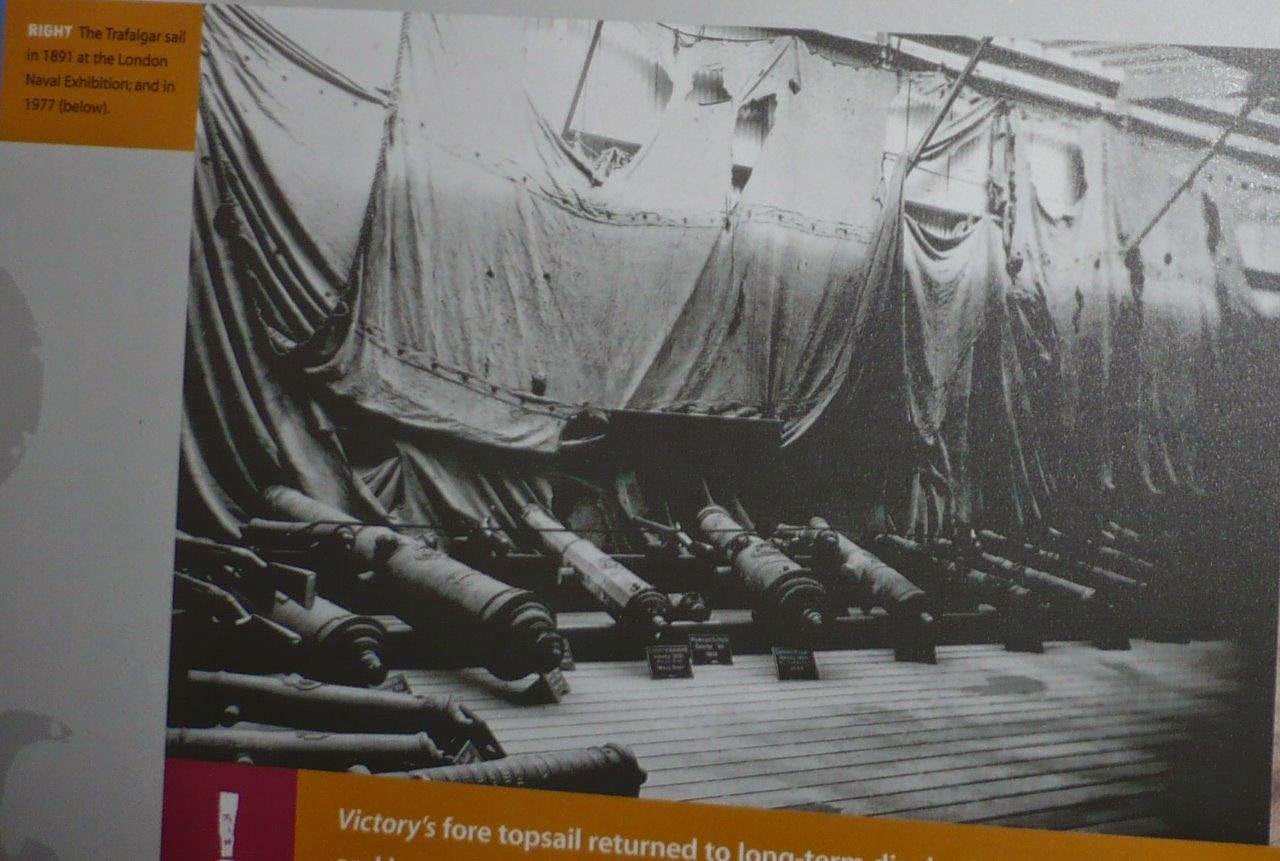 Today, The Trafalgar Sail is on display to the public under environmentally-controlled conditions in Storehouse 10 at the Portsmouth Historic Dockyard. It is regarded as Britain’s most important marine historic textile.
HMS Victory continues to be flagship of the Second Sea Lord and is the oldest naval ship still in commission.


Refs: National Museum and Portsmouth Historic Dockyard.
Images include:  Hand-stitching a sail in a sail loft in the late 18th century and The Trafalgar sail at the 1891 London Naval Exhibition. Other sources supplied on request.

“HMS Victory’s foretopsail . . . is the largest single surviving object from the Battle of Trafalgar.”

A fascinating article, but wouldn't Victory herself be the “largest single surviving object” from the battle? I recognize the assertion may vary with one's definitions. Perhaps the thinking is that Victory has been much restored, and substantial portions of it are not the material that saw action in 1805. Fair enough, if so, but the piece would do well to make that clear, if it underlies the assertion about the sail.

Thanks for the comment, Brian. I have added the words to the post -'apart from the ship itself'. I had originally thought of including this in the article, but decided the ship was not an object.

There's no right or wrong choice between those; they're options in the ways that the writer can organize information, and make choices in how to convey her understanding of the material world. Determining whether something is a surviving artifact from Trafalgar can be a matter of assessing whether it's a single object, or whether the material components of a more complex object are all, or are sufficiently, “original”. Or, it can be a combination of those considerations.

In any event, thanks for bringing this to broader attention.