The little known history of the Bagot goat is interlaced with images of knights on horseback, Kings and coats of arms, a story spanning 800 years where fact, legend and folklore are closely intertwined.

This rare and ancient breed, probably England’s oldest, survived for centuries under the protection of one aristocratic family. However, half a century ago, because the breed was deemed to be of little intrinsic value, attempts were made to exterminate it. In 1979 only 12 goats remained in the herd. Without the help of a dedicated group of enthusiasts the pure Bagot goat and its intriguing story could have been lost forever.

Fact and folklore behind the legend

When Richard the Lionheart returned from the Holy Land in 1194, the evil Prince John was Regent of England and Robin Hood and his Merry Men championed the poor of Sherwood Forest. This legend is well known. But almost unknown is that when Richard returned to England from the Crusades he brought back a few black headed goats reputedly to be from the Rhone Valley of Switzerland. 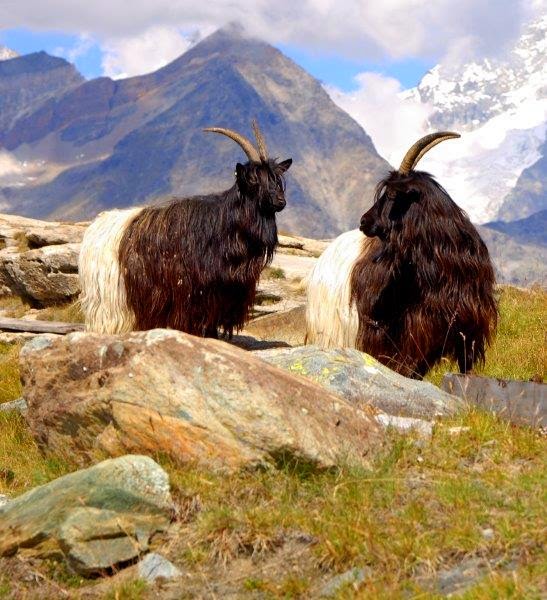 Two hundred years later, in 1380, a young King Richard 11 presented the herd of black and white goats to Sir John Bagot at Blithfield Hall in Staffordshire. These were released into Bagots Park, 800 acres of woodland on the edge of the great Needlewood Forest. Here beneath the majestic oaks the goats ran freely. With the Lord’s wild deer, they provided sport for the royal hunting parties. This was their home for 600 years.
For centuries legend and folklore allowed the long haired goat to live a protected life. One story tells that long ago a poacher killed a Bagot goat and ate it. Immediately, he fell ill with a mysterious illness. After that the goats were never touched despite the poachers still stealing the Lord’s deer.
Unlike the deer, however, by law the goats were not classed as wild. If the goats strayed onto local farmland, the Estate had to pay for any damage to the crops. It is said the farmers may have encouraged the goats to escape onto their land in order to claim compensation. 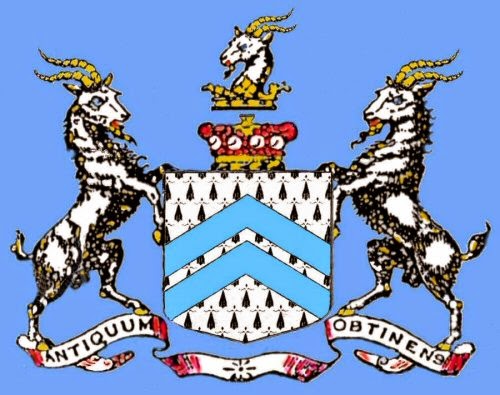 In 1380, Sir John incorporated a goat’s head into the Bagot coat of arms. It became the family’s mascot. Sir John’s helmet, which rests in the Blithfield Church, has a goat’s head on the top of it. Displayed at Blithfield Hall is a magnificent set of goat horns. These measure almost 4 feet across. But the legend, which closely unites the goats with the Bagot family from which they take their name, is that if ever the Bagot goat dies out, the House of Bagot will fall. This belief possibly ensured the survival of the breed.
Over the years the size of the herd fluctuated. As numbers increased some culling was done. In 1920 and 1954 a few Bagot bucks were sent to the Rhinog Mountains in Wales. Today some of the wild goats of the Rhinog have distinctive Bagot markings. 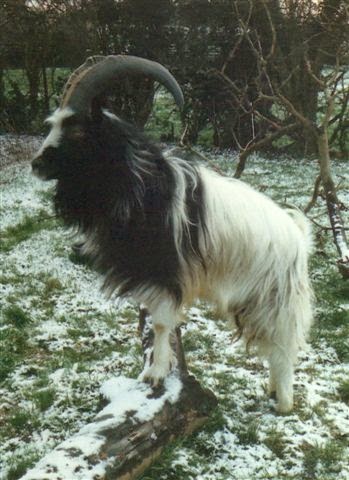 By 1939 it appeared that the fate of the Bagot herd was sealed. The Staffordshire Water Authority bought the Blithfield Estate. The old forest and grazing land was to be drowned to become a massive reservoir. The Bagot goat was considered to be of no commercial value and was to be exterminated. Fortunately, with the outbreak of the Second World War construction of the reservoir was postponed. The following year, the War Agriculture Executive issued the extermination order. Lord Bagot disputed this and the goats were given a reprieve, but the Court stipulated that the herd must not exceed 60.
At the end of the war, work on the reservoir resumed and in 1953 most of the land was flooded. The remaining forest was cleared for farming. The Water Authority had allowed the 5th Lord Bagot to continue living in Blithfield Hall but the stately home had fallen into disrepair. When he died, the 6th Lord and his wife, Nancy Lady Bagot decided to buy it back together with some of the surrounding land. After considerable expense and extensive restoration, Blithfield Hall was opened to the public in 1956. 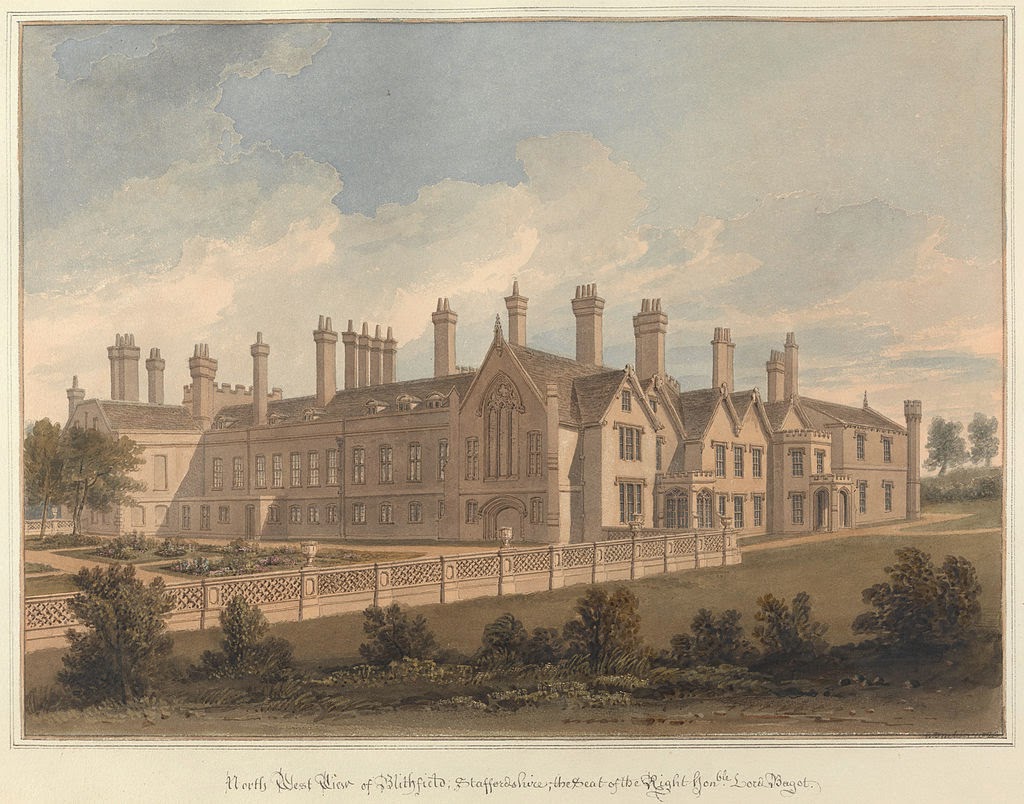 Of the hundred goats which had roamed the woodland, only twenty were kept. These were brought to the Hall by Nancy Lady Bagot. The remaining wild goats were caught and sold. A few went to private farms or zoos, others were killed. A group was sent to Hal Bagot, in Cumbria.
But the Estate's goats were destined to live in a walled garden and small paddock near the house. Gone was the natural cover of the primeval forest. By 1979 only 12 goats remained and their survival was in doubt. This gave the Bagot breed the dubious distinction of being, not only on the critical list of British endangered breeds, but featuring as the rarest of the rare breeds by the British Rare Breeds Survival Trust.
Nancy Baroness Bagot felt she had no option but to entrust the remaining animals to the RBST in a hope that they would ensure the survival of the breed. Perhaps the old legend prompted her do this.  The Trust decided the only way to protect the species was to increase their numbers as quickly as possible so embarked on a grading-up program using base stock of various breeds and crossing them with pure Bagots. But a handful of enthusiasts could see that the true bloodline of the ancient breed was in danger of being lost.
As a result, the Bagot Goat Breeders Study Group was formed in 1987. Their aim was to promote the breed and maintain its integrity. Their approach was different to that taken by the Trust. Over the previous 80 years culled animals had been relocated around England and Wales. It was to these sources of pure lines that the Study Group directed their attention. By tracing the history of the animals and selecting from the small closed herds, a breed register of pure stock was compiled. As a result of the hard work undertaken by dedicated enthusiasts, hopefully the Bagot goat will never come close to extinction again. 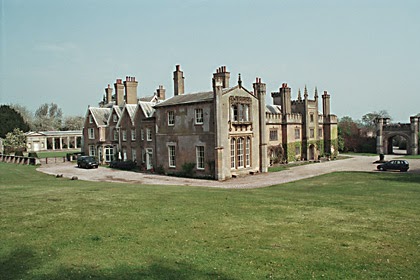 Although there are no Bagot goats at Blithfield Hall today, Nancy Baroness Bagot wrote, “I count myself very privileged to have known Bagots Park and to have seen the goats in their natural surroundings. It is very heartening that so many goat lovers are caring for these unique and historic animals.”
Nancy Baroness Bagot who was Honorary President of the Bagot Goat Society for many years passed away in 2014.


Note: When I visited England several years ago I came across a handsome Bagot buck on a farm in the south. I noted in my diary “What a magnificent animal”. Last year, I published a short story for boys, ‘King Richard and the Mountain Goat,’ – a purely fictitious tale based on the myth surrounding the Bagot breed. 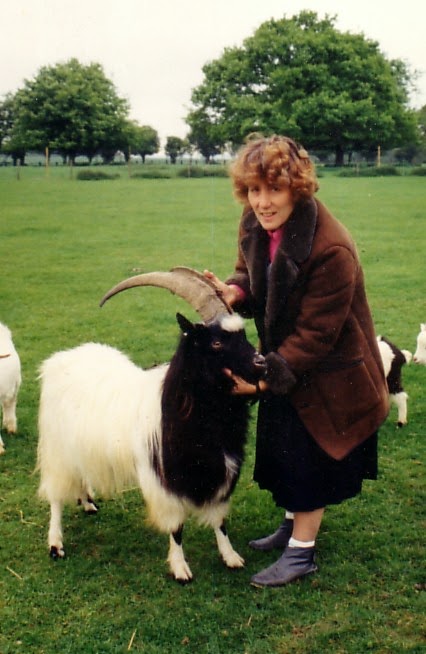 Note 2: This article by Margaret Muir was first published in The Goat Farmer Magazine – June 2000
For more information about Bagot Goats go to : http://bagotgoatsociety.co.uk/
Posted by M. C. Muir at 8:52 am