The George Hotel and its patrons - Lord Nelson, Jack Aubrey and Horatio Hornblower

The George hotel in Portsmouth was long regarded as a prestigious establishment providing rooms and meals for weary travellers arriving by coach from London. It was frequented by admirals and sea captains alike, including Horatio Nelson who visited on several occasions - most notably on his last day on English soil before embarking on HMS Victory and heading for Trafalgar. 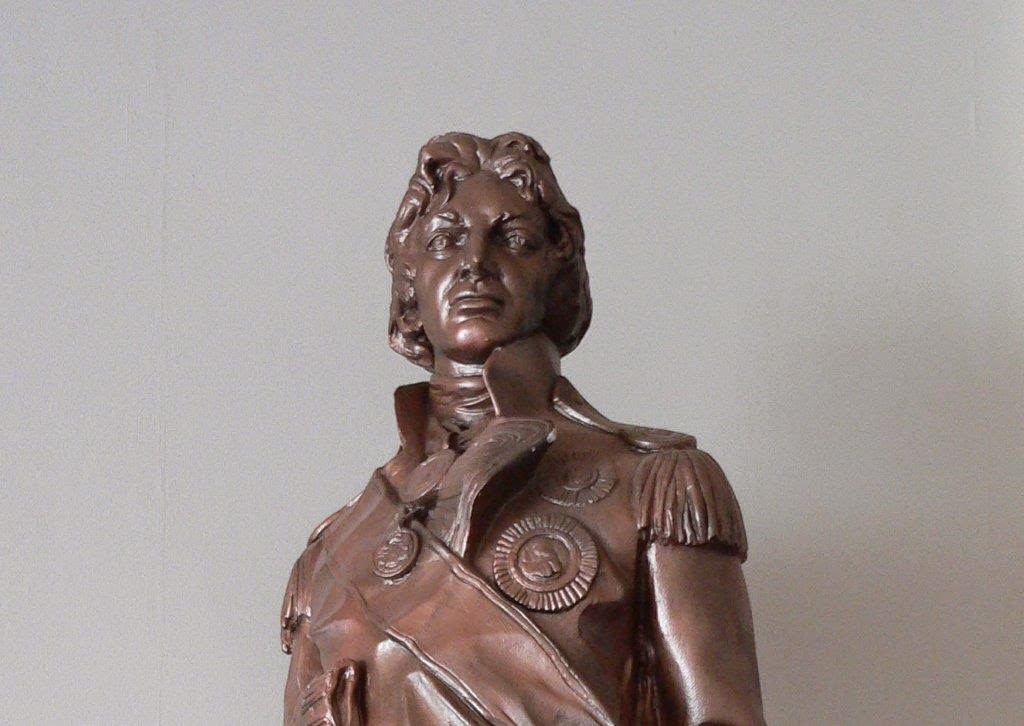 While factual events fix The George on the history map, nautical fiction authors, Patrick O’Brian and CS Forester used the venue to colour the exploits of their heroes, Jack Aubrey and Horatio Hornblower respectively. Patrick O’Brian refers to The George at least 10 times in the canon.
. 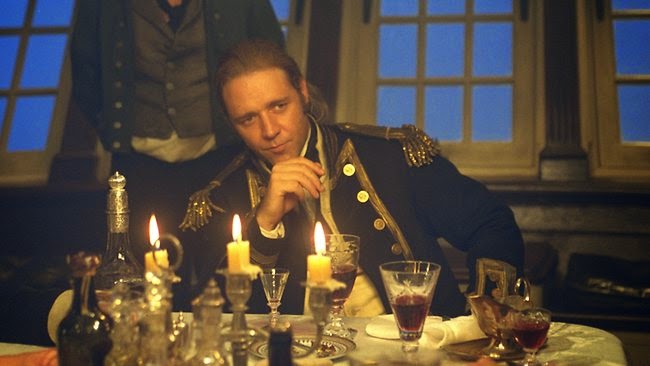 CS Forester not only made several mentions of the famous coaching inn but, in Hornblower and the Hotspur chose the hotel’s coffee-room to host the wedding breakfast following Horatio's marriage to Maria. 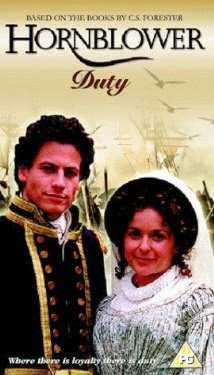 Because of the intriguing connections existing in both fact and fiction, when I planned a 5-day visit to Portsmouth (from Australia), there was only one hotel I wanted to stay at – The George. But in the words of Robert Burns, The best-laid schemes o' mice an' men gang aft agley.


On arrival at a hotel named The George Hotel, full of anticipation, I was confronted by a building dating back to 1781. And for a visitor, it was ideally located only a stone’s throw from the Portsmouth Historic Dockyard. But this was neither the original George Hotel, nor the one I had come looking for. I soon learned that the famous coaching house had been severely damaged by German bombs on 10 January 1941 and subsequently demolished. Disappointed but not undaunted, I set about to locate the site where the George Hotel in question had stood and, if possible, secure an image of the old hotel. 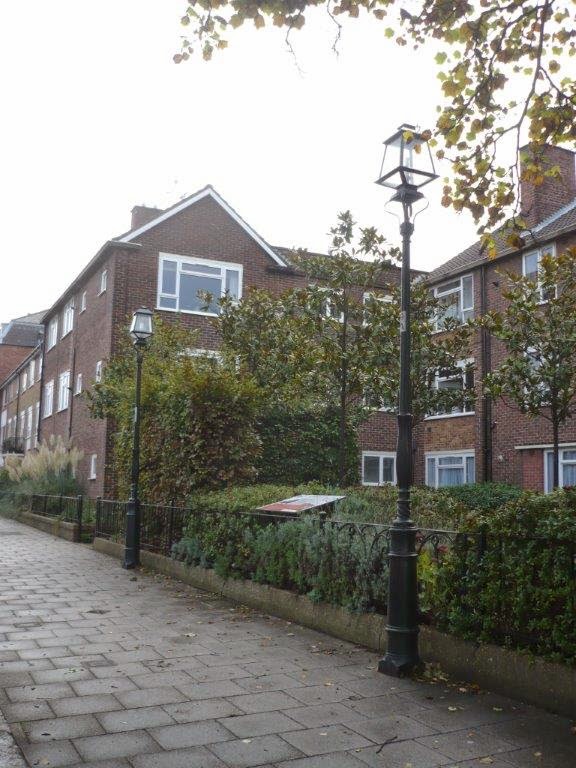 Having ascertained the coaching house was located near Portsmouth’s Anglican Cathedral, I headed for the High Street and found a pair of post-war lamp posts gracing the curb where a pair of gas lamps had one stood. They marked the spot where the London coaches came to a halt outside the original George Hotel’s front entrance. It was here Lord Nelson had stepped from his post-chaise from Merton and entered the building. It was here, in fiction, that Jack Aubrey and Horatio Hornblower had entered the premises to spend many a happy hour. 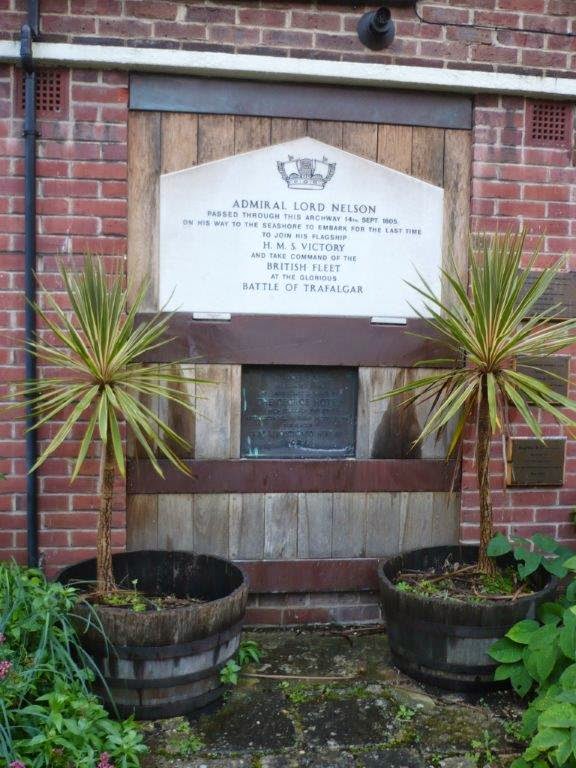 Today, on the pavement between the two lamp posts is a bronze plaque that reads:  Lord Nelson rested at this old Posting House on 14th September 1805 before embarking on his flagship H.M.S. Victory.


Because of the devastation caused by the WW11 air raids, the site was levelled and, in 1954, an uninspiring block of flats arose in its place. It was named, George’s Court. On the wall of the latter-day building is another plaque paying tribute to Nelson’s visit.


But my search had not been for the ghosts of the past but for the building that had accommodated them. While, the first hotel on this site had been a thatched-roofed house called the Waggon and Lamb, I can only presume the name George Hotel was adopted during the reign of George 1, when the new building, with its Georgian façade, was constructed.


At that time, High Street was a busy thoroughfare, not only with horse-drawn carriages, coaches and carts, but sailors, soldiers, local traders and pedestrians.

In 1739 a Town Hall and Market House had been constructed in the centre of the road only a stone's throw from the George Hotel. This, seemingly odd location, created a thriving hive of shops, stalls and offices, but it also created a massive bottleneck to the traffic passing along the street. For that reason, it was eventually demolished in 1837. 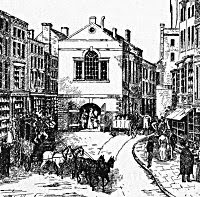 Also situated on High Street, only a cable’s length from the hotel was the Church of St Thomas à Becket or St Thomas of Canterbury (now Portsmouth Anglican Cathedral). It was here CS Forester’s characters, Horatio Hornblower and Maria were married before repairing to The George for the wedding breakfast. 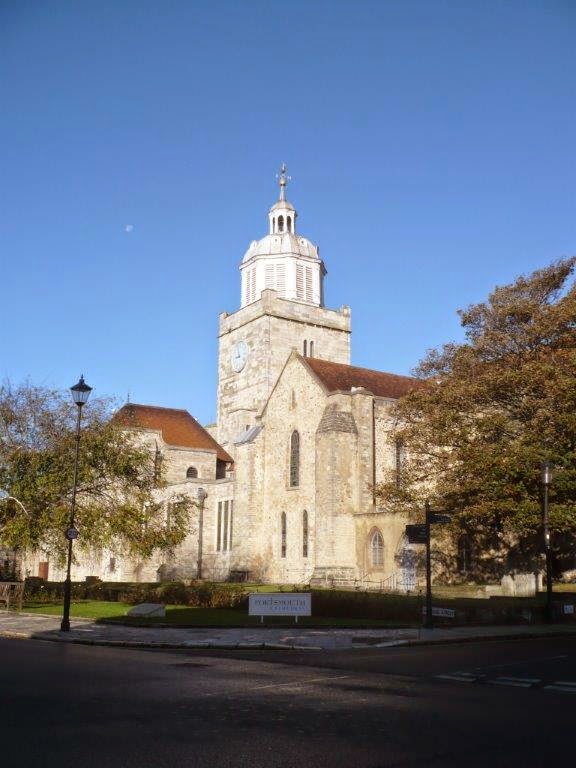 Continuing along to the end of High Street brings the visitor to the fortifications that had defended the town since the reign of Henry V111, to one of the sally ports and to the beach. But when Nelson left The George, in the early afternoon of the 14th, he did not head down the High Street, instead, to avoid the already congested thoroughfare and the well-wishers who were eager to accompany him, he slipped out of the hotel’s back entrance into Farthing Street. 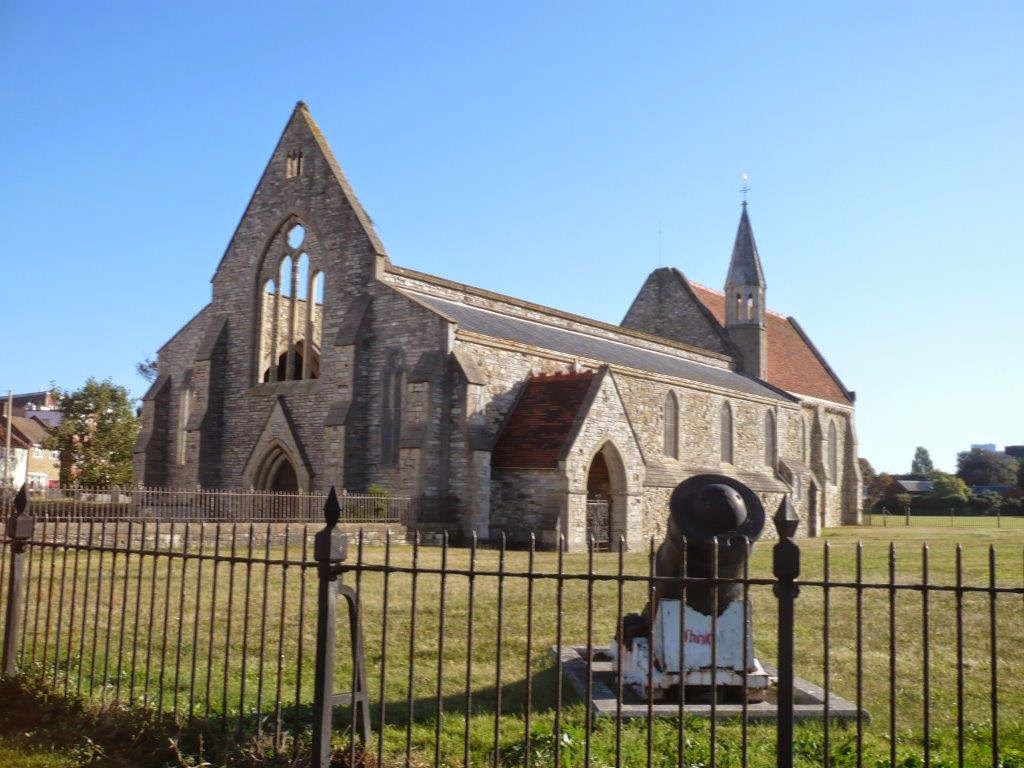 As a further means of avoiding attention, from Fighting Cock Lane (Pembroke Road), he detoured across the garden of the Governor’s residence. At the time, this was part of the complex occupied by the Garrison Church – a building dating back to 1212. Sadly, the Church’s nave was also badly damaged in the war-time bombings.

Accompanied by George Rose, the Vice-President of the Board of Trade, and George Canning, The Treasurer of the Navy, Nelson headed across a narrow bridge over the moat to the triangular shaped fortification – the Spur Redoubt, which protruded into the sea, and to the beachfront beyond. Here, with pebbles crunching under his feet, he was able to gaze across Spithead and see the fleet gathering for departure.


Nelson’s diary entry of Saturday Sept 14th 1805 reads, “… embarked at the Bathing Machines with Mr Rose and Mr Canning at 2: got on board Victory at St Helen’s; who dined with me; preparing for sea.” 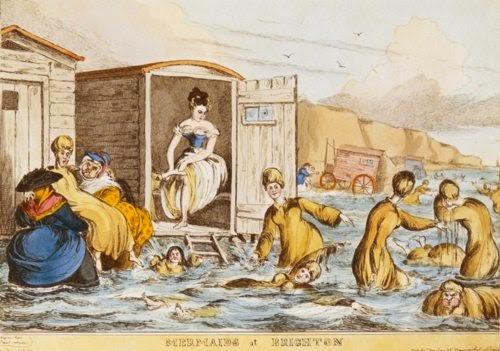 As an aside – I find it hard to imagine bathing machines, normally associate with the Victorian era, being present on the beach in Nelson’s time. They are described in Outon’s Traveller’s Guide of 1805 as:
“four-wheeled carriages, covered with canvas, and having at one end of them an umbrella of the same materials which is let down to the surface of the water, so that the bather descending from the machine by a few steps is concealed from the public view, whereby the most refined female is enabled to enjoy the advantages of the sea with the strictest delicacy.” Fred Roe’s 1905 stylized painting Good bye, my lads depicts Lord Nelson, with a ship-of-the-line in the background, waving farewell when he departed Portsmouth. This, however, is a far cry from the image I conjure in my mind of a senior naval officer standing on a shingle beach with bathing machines close by and swimmers splashing about in the water.


Nelson’s final hours on English soil had been busy and included two visits to the George Hotel. But they were to be his last. The hotel long remembered the Admiral’s visit with pride, and preserved his room for the next 136 years until the hotel, like the British admiral, fell to enemy fire during unforgettable conflicts that would long be remembered.


Note: this follows an earlier post – “The Portsmouth Road aka the Sailor’s Highway”


References: The Project Gutenberg EBook of “The Portsmouth Road and Its Tributaries”, by Charles G. Harper, 1895 AND “The Story of Nelson’s Portsmouth” by Jane Smith

Very nice piece of research there, and a reminder that even in England, where every third structure seems to possess some sort of historical provenance, nothing lasts forever.

We stayed at the current George Hotel a couple of years ago while touring the naval base and associated museums. The George is a nice little place with an accommodating staff. A fine breakfast is included. The bar is a cozy place, with the original well in a corner. As mentioned above, the location is excellent for the visitor wishing to devote time to the opportunity to view an overwhelming amount of British naval history. HMS Victory, the Mary Rose, and the spectacularly restored HMS Warrior of 1860 are the big draws, but the museums could easily consume several days of the dedicated nautical fan's time.

I agree completely. Any visit to Portsmouth should be no less than 3 days.
I too enjoyed the convenience of the George Hotel near the Maritime Museum. I would recommend it to anyone considering a visit.
At the time Linda (C) and her husband were staying at the hotel nearby so the company, also, was excellent.
Regards, MM