Over 9,000 drown when MV Wilhelm Gustloff was deliberately sunk

We remember the tragedy that was the Titanic and the 1,500 casualties - and of the iceberg and the freezing waters of the North Atlantic.
But imagine a liner going down in the ice strewn water of the Baltic. taking 9,400 victims to a freezing watery grave - including 5,000 children. 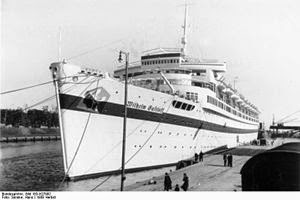 "The water temperature in the Baltic Sea at this time of year is usually around 4 °C (39 °F); however, this was a particularly cold night, with an air temperature of −18 to −10 °C (0 to 14 °F) and ice floes... covering the surface.
"Many deaths were caused either directly by the torpedoes or by drowning in the onrushing water. Others were crushed in the initial panic on the stairs and decks, and many jumped into the icy Baltic."

It happened in war time and the ship was the MV Wilhelm Gustloff. She was carrying civilian evacuees as well as military personnel.

Was it because the ship was less glamorous than Titanic?
Or that this was an inexcusable man-made tragedy we would rather forget?
Or that the people did not count as much as the rich and wealthy and glamorous who travelled on the White Star Line?

Note: There have been several documentaries made about this event - to read more see Wikipedia page:
http://en.wikipedia.org/wiki/MV_Wilhelm_Gustloff
Posted by M. C. Muir at 7:43 am