The Pots in my Garden

A tribute to a remarkable woman - an artist and a potter.
Dorothea Crooks 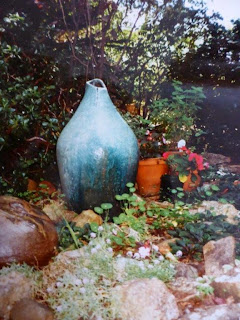 Nestled amongst the lush foliage, in the corner of an overgrown English-style garden, stands a curiously shaped urn.

Rays of sunlight filter through the leafy canopy highlighting the azure glaze on its well-proportioned contours.

Beneath the plaited vines of a white climbing rose, another comely pot is almost hidden from view.

On the banks on the Wungong Brook, nestled in the foothills of the Darling Range (Western Australia), an overgrown garden hides an unusual collection of sculpted pots – the work of Dorothea Crooks, an extraordinary craftswoman.

Lost for a generation, but not forgotten, these strangely shaped vessels had become part of the studio garden at Waterway Farm but it was not until she reached her mid-80s that Dorothea decided to hold her first pottery exhibition.

She entitled it The Pots in my Garden. 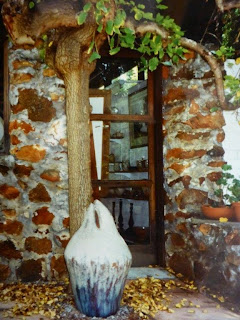 Dorothea Crooks had been involved with crafts all her life. Growing up in a family whose business was the production of high-class teddy-bears, she had learned the art of toy making from an early age. To her, handcrafting was a way of life.

As she matured, she graduated from fashioning bears to floral artistry, enjoying the western contemporary style and intuitive work telling a story in flowers. But for this talented lady, the artists’ bowls and vases were, “symmetrical and boring”. Dorothea wanted containers with character to enhance her floral art.

But rather than allowing this to deter her, it inspired her to create her own pots and, as a result, she decided to become a potter.

In 1965, Dorothea and Bruce Crooks moved to Waterway Farm in the foothills of the Darling Range. The land, rich in the history of early Western Australian settlement, was described in the Perth Gazette of 1860 as, one of the most desirable properties in the colony. Watered all year round by the crystal waters of the Wungong Brook, the area was once a camping ground for the early settlers, providing a ford across the swift flowing stream. 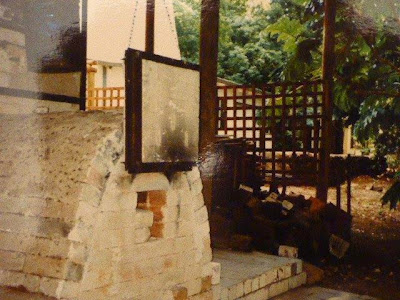 In these idyllic surroundings, Dorothea built her studio and, by the side of the Wungong Brook, she created an English-style cottage garden.
To complete her dream, she added a three-chambered brick kiln constructed in the traditional style of the Chinese climbing kilns.
Here, with the guidance of Western Australian potter, Meg Sheen, Dorothea learned how to mould the urns and vases for her floral displays.

She never used a wheel. She disliked symmetrical pottery and worked entirely by hand, first coiling the wet clay then patiently and laboriously working it to achieve the smooth finish she desired. 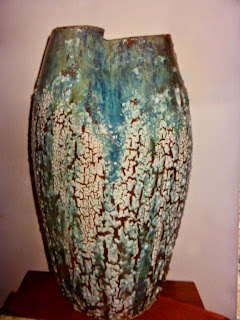 Firing the kiln with deal, pinecones, nuts and even bones, she created so much heat that flames would belch from the chimney and she would experiment with various painting and glazing effects.

She achieved striking finishes by allowing powdery ash to burn into the firing clay creating a bubbly effect.

"If you want to create something different, you must be prepared to take risks," she said. As a result, every ornamental pot was distinctive in shape, texture and colour. 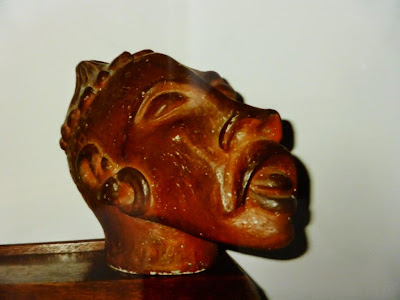 From coiling pots, Dorothea progressed to sculptured clay portraits moulding strange and unusual faces, including her Voodoo and oriental heads. Polishing them with Nugget shoe polish and oil, she would try anything until she achieved the colour she wanted.

But before her creative work had reached its peak, it was halted. Suffering a back injury as the result of an accident, she was unable to walk. Confined to a wheelchair, she could no longer lift the huge clay vases and had to accept that she had fired her last pot.
Her career as a potter was over. 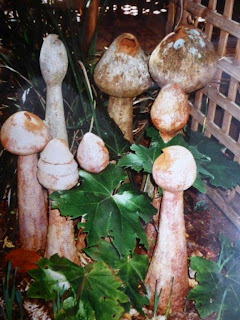 Not wanting to part with her work, the collection was transported into the studio garden and placed amongst the colour kaleidoscope of flowers, shrubs and fragrant vines.

Beneath the arching boughs of the broad Chinese elm, the pots remained undisturbed for many years.

But for Dorothea they were never forgotten. One morning, as she wandered through the garden’s petalled pathways, she felt the need to resurrect the pottery which had lain dormant for so long.

She wanted to share her work with others and decided to hold an exhibition so she commissioned three well-known West Australian artists to capture, on canvas, the pots as they rested in her garden.

As summer turned into autumn and the hues into reds and golds, the elegant urns and vases were wheeled into the studio.
“A lot of them, I had forgotten,” she said. 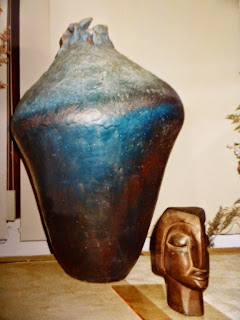 The presentation of a stunning collection of drawings and paintings in charcoal, chalks, oils and watercolours complemented Dorothea’s Pots in my Garden exhibition.

And although most of the pots were returned to the garden, Dorothea derives pleasure from the ones that she has kept in her studio.

Although, it is quite possible that a few forgotten pots still remain undisturbed, hidden beneath the bower of tangled flowers and vines, now growing wild on the fertile banks of the Wungong Brook.

Note:
I wrote this article several years ago and it was accepted for publication by a prestigious Australian magazine. 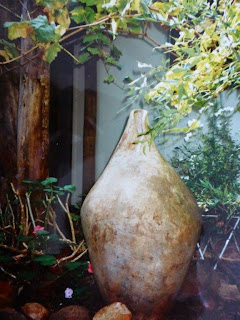 But before it went to print, the submissions editor moved on and the new editorial staff had different ideas so the story was never published.

Having subsequently moved thousands of miles away to the other side of Australia, I lost touch with Mrs Crooks, and only recently discovered that she died, in 2006, aged 92.

I also learned that the farm and studio were sold and I can’t help wondering what happened to her wonderful craft work.

It may seem a little late now, but knowing how thrilled she was at the prospect of seeing her story in print, I decided to publish here on my blog.

It’s never too late to remember. 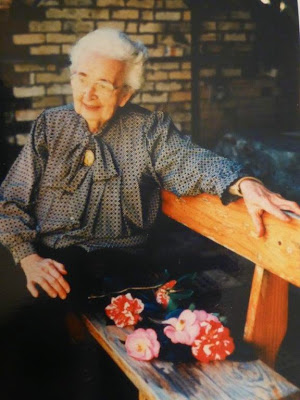