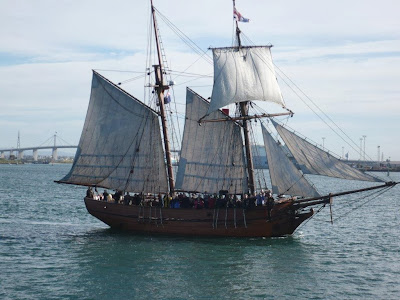 FLAX, HEMP and STOCKHOLM TAR used in this replica.
The replica ENTERPRIZE, which sails regularly on Port Phillip Bay, was constructed on the lines of the original. The 1830 Hobart-built topsail schooner was a bulk cargo ship that carried coal and other goods, however, in 1835 she landed the first settlers on the Yarra River. This was the establishment of the settlement that later grew into the City of Melbourne. 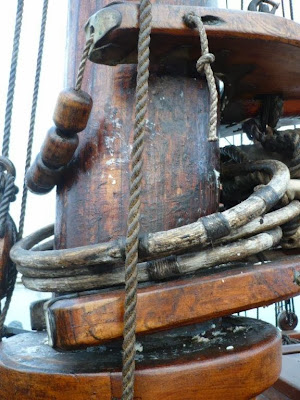 Aiming for authenticity, the latter-day builders insisted on using the same materials as in the original vessel. As a result, the sails are hand-stiched from flax imported from Scotland. The standing and running rigging is of natural hemp fibre imported from Holland coated with Stockholm Tar. 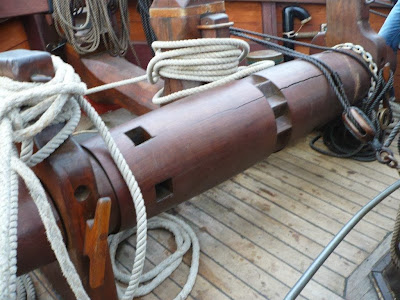 All the timbers are Australian and New Zealand grown or recycled. The tiller and windlass are examples of the fine craftsmanship that went into building this replica tall ship. 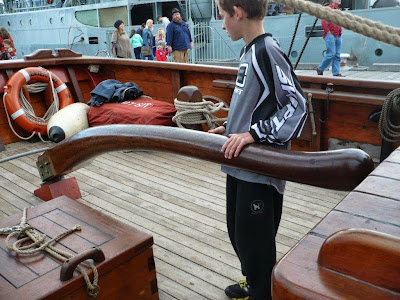 This interesting replica vessel takes passengers on regular day sails on Port Phillip Bay.
I photographed her during the Tall Ships Festival in September 2013.
Posted by M. C. Muir at 8:59 am

Some sort of pear-shaped human body pertains to one who is usually heavy within the underside versus major. Typically, there are approximately some sort of 3 measurement imbalance between major in addition to underside. Commonly, though some sort of pear-shaped woman’s middle is usually well-defined; 5 connected with 5 kilos accumulated will probably migrate towards sides in addition to lower limbs. Primary, Breitling Replica Omega can certainly past intended for many, many years, presented they've already also been presented the suitable health care. In truth, most of these replica dior usually are made to help past an entire life, and it also means that almost all rough people such as Thunderbirds on the YOU Airforce include manufactured most of these the hermes outlet of choice. In this article i am dealing with criteria intended for model in addition to perfection. Subsequently, most of these bogus carriers usually are watertight. Anybody can thus create a dip within a share while in summer months while not having to stress about this fake handbags deterioration. To help major everthing, the best Breitling sixth v uses premium quality products that do definitely not decay no matter if come across serious varying weather condotions. Immediately skirts, A-line skirts & le boy chanel bags many be an aid to sense of balance an increased underside; a variable middle typically offer an increasingly variable healthy. Very long jerkin or maybe Very long shirts—These really should slip underneath this broadest section of the sides, to help even this brand between uppr in addition to cheaper human body, in addition to produce each halves glimpse far more consistent bigger.

Jaeger-LeCoultre appreciates the situation like an important component with the particular landmark watchmaker's success. Le Sentier found themselves being regularly stop externally globe by serious outstanding skiing conditions thunder replica audemars piguet O'Neal watches storms for the duration of extended replica chanel handbags and also tough winter. Nevertheless, creating a wonderful regarding resourcefulness and also a minor metal from the nearby mines, a quality and unbelievably innovative pieces were developed. Several many years afterwards, in 1866 being exact, Antoine LeCoultre and also his great child thought to bring together every one of the facets of your watch's generation under a single roof. And equip these actions so that you can Best Replica Watches UK purpose effectively, the weighty steam run device was set around work all of the necessary sources. LeCoutlre & Cie came to be. For in which reason modern replica Celine All Soft handbags way of making artist watches, this industrial services within Ce Sentier quickly became Swiss Replica Watches UK passionately identified involving considering that the 'Grande Maison' with all the Vallee r Joux.