ADMIRALTY ORDERS by M.C. Muir is now available from Amazon.com and Amazon.co.uk in paperback. 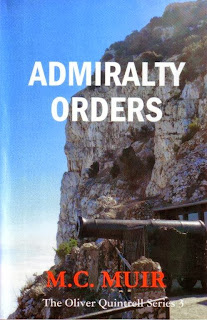 Book Three in the Oliver Quintrell nautical fiction series, sees Captain Quintrell facing life-threatening events over which he has no control.
Ordered to sail to Gibraltar in the late summer of 1804, his ship soon becomes hemmed in, not by Spanish gunboats or French ships of the line, but by the Quarantine Regulations which close the port around him. Unable to halt the loss of life from a raging epidemic, he strives to do his part to help save the Colony when it is at its most vulnerable.
This seafaring adventure, set during the Napoleonic Wars, is based on actual events which took place in and around Gibraltar between August and December, 1804, including a major sea battle.
It shows how ignorance and prejudice can exist in a ship, and presents a startling portrait of life at Gibraltar - a British settlement ruled by a military garrison where naval power was only an incidental force. 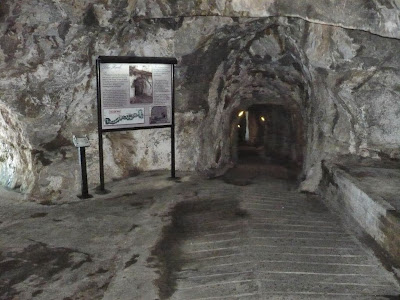 I took this picture inside the Windsor Gallery which was the original tunnel dug into the Rock of Gibraltar.
It is where the 32 pound cannon were installed to defend the Rock against the Franco/Spanish enemy.

The e-book edition of ADMIRALTY ORDERS is available from Amazon at $2.99.
The paperback is also on sale through www.lulu.com.