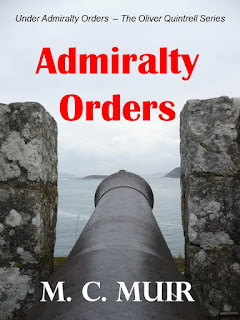 With the success of THE TAINTED PRIZE and FLOATING GOLD in e-book format, I have begun writing the next adventure in my nautical fiction series.
Having discarded one title because it appeared too many times in a Google search, I have titled my work-in-progress: ADMIRATLY ORDERS.
The series is headed: Under Admiralty Orders - The Oliver Quintrell Series, and in keeping with the first two books , Captain Quintrell picks up his orders from the Admiralty before joining his ship in Portsmouth and proceeding to sea.
In ADMIRALTY ORDERS, set in 1804, I have taken the liberty of hanging the fiction elements on a framework of actual historical events. But unlike Patrick O'Brian and CS Forester who are both guilty of manipulating events or substituting the participants in them, I prefer to adhere to the truth and report the battles merely from an observer’s standpoint.
There are certain events which were occurring in Spain and the Strait of Gibraltar in 1804 which are un-romantic and do not feature to any extent in any fiction books I have read.
Yet the facts surrounding these events are startling.
I hope my narrative will convey the enormity of the problems at that time and that this will make both enjoyable and interesting reading.
I hope to have the book completed for publication by the middle of the year.
As with the image for THE TAINTED PRIZE, this picture was taken during a recent visit to an old fortress in Portugal.
Other historical fiction books by Margaret Muir are available from Amazon.
Posted by M. C. Muir at 9:37 am