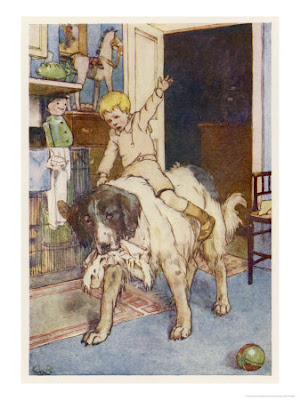 Few animals, save for BLACK BEAUTY and LASSIE, have appeared more often on the silver screen.
NANA was the character in Peter Pan who was cast as the nanny to the Darling Children. The dog's name has been known to generations of adults and children around the world.
It was not difficult for JM Barrie, author of The Boy Castaways and the stageplay, Peter Pan, to imagine a dolice and kindly large black and white dog caring for his charges.
His own dog, LUATH, was a Landseer. Barrie wrote about his writing: "I must have sat at table with that great dog waiting for me to stop, not complaining, for he knew it was thus we made our living, but giving me a look when he found he was to be in the play, with his sex changed.".
In most stage versions of the play, the part of NANA was performed by an actor dressed in a large fluffy dog suit but the role was based on LUATH, the writer's pet.
For over 100 years, the Newfoundland nanny, NANA and the boy who never grew up, Peter Pan, have given pleasure to countless children (and adults) around the world.
On one occasion JM Barrie commented that: "At one matinee we even let him, for a moment take the place of the actor who played NANA, and I don't know that any members of the audience ever noticed the change, though he (the dog) introduced some 'business' that was new to them and old to you and me. Heigh Ho!"

I read your peace, and having a Landseer myself, I am ofcourse delighted that Nanna was in fact a Landseer and not a st Bernard. There is however one confusion about the Landseer Newfoundland. The brittisch cal it a Landseer Newfoundland, but in the rest of the world the Landseer ECT is a breed on its own. He has the same ancestors as the newf,came from st John, close to Newfoundland, but is not the same! Seeing the picture it looks more like a Landseer ECT. They are build difertently, higher on the legs and a bit slimmer. I do not agree that it is a black and white Newfoundlander. I read somwhere that Landseer an JM Barrie new eachother and made a book together called 'The two dogs' It has Landseers drawings.

good luck with your blog!!

Dear Writer,
Thank you for your valuable comment.
I have to admit I know little about Newfoundlands or Landseers apart from what I have read. I have never owned one.
I found your comment interesting that Barrie and Landseer produced a book.
I will try to find out more about that.
Best wishes,
Marg

That's not Peter on Nana's back, but Michael Darling, Wendy's youngest brother.

Of course! Will amend.
MM