Flying a single-engine Cessna, this outback pilot has covered thousands of miles of territory in Western Australia rounding up goats, sheep and cattle. From the air he takes full control of the muster. Only he knows where the goats are. Flying at an altitude of 500 feet he can see the men on motor bikes and by radio contact can position them exactly where he wants them.

“It’s like a game of chess,” he says. With the help of six men, a goat-muster usually takes three or four days.  “But it’s not a simple matter of just pushing a mob along. First you have to find them then gather them together then move them in the direction you want them to go without losing any. It might sound simple, but to do this you have to know how the goat thinks,” he says. 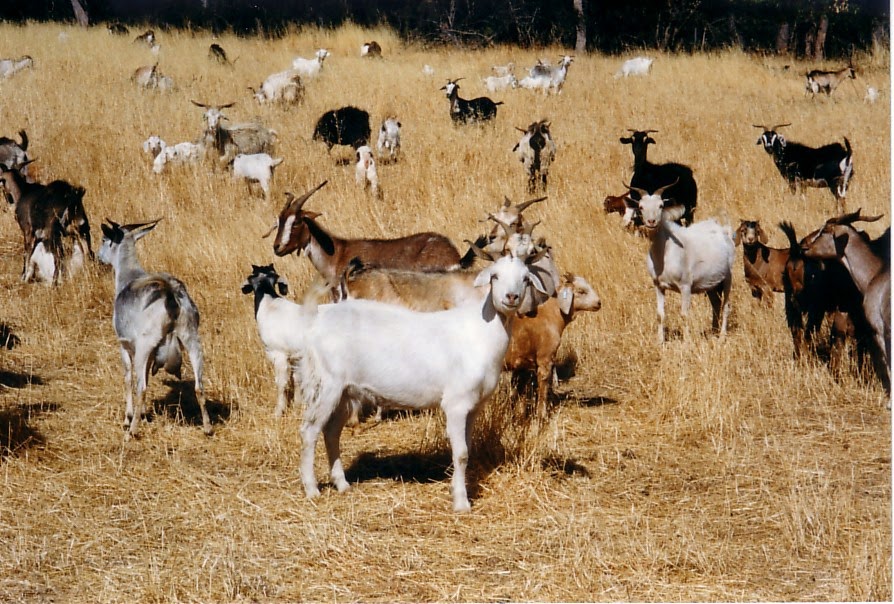 “Goats are not like a sheep (to move), they are more like cattle. A goat has a brain. A sheep hasn’t. You have to convince the goat that it’s his idea to move to where you want him to go.
“With goats you influence them with the noise of the aircraft, the bikes just hang around to make sure that none break away. Because a goat can hear a motor bike, on a still day, from six miles away, you’ve got to get the bikes to stay well back. You do not crowd a goat.”
On the ground, the riders cannot see the mob of goats. The pilot tells them when to move and where to move to, and when to switch the bike engines off and remain silent. Bike riders sometimes ride all day without seeing another bike. Only in the last few hours of the muster do the riders and mob come together. 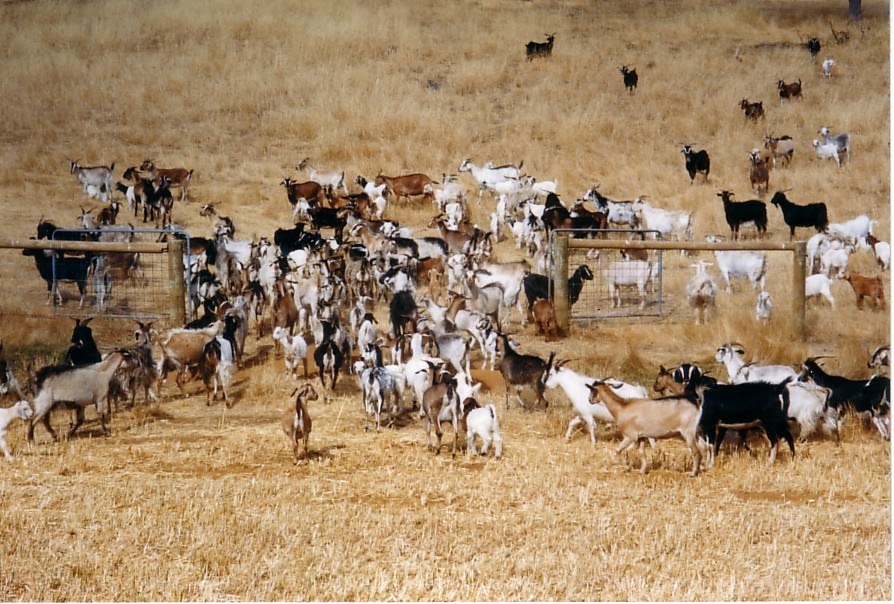 “You don’t use the aircraft’s shadow with goats,” the pilot said. “Just the noise. It irritates them – like a mosquito. The knack is to irritate the goat but not harass it, just get it slightly aggravated. That makes it want to move. Once it’s moving, you just keep irritating it.”
Another thing is knowing the best times to muster.
“The rangeland goats mob up at certain times and disband for unknown reasons. Usually they stay in small groups of about a dozen, but twice a year they come together. Once, at a certain time in winter, when they are all in good health, they suddenly congregate in large mobs. Small groups of twelve, swell to groups of two to three hundred. Similarly, in summer, they form into huge mobs. I have seen 700 goats congregating around a watering hole,” he said.
“When you find scattered groups, the technique for mustering goats is again different to sheep. With sheep you push up the little mobs and add them to the main mob. 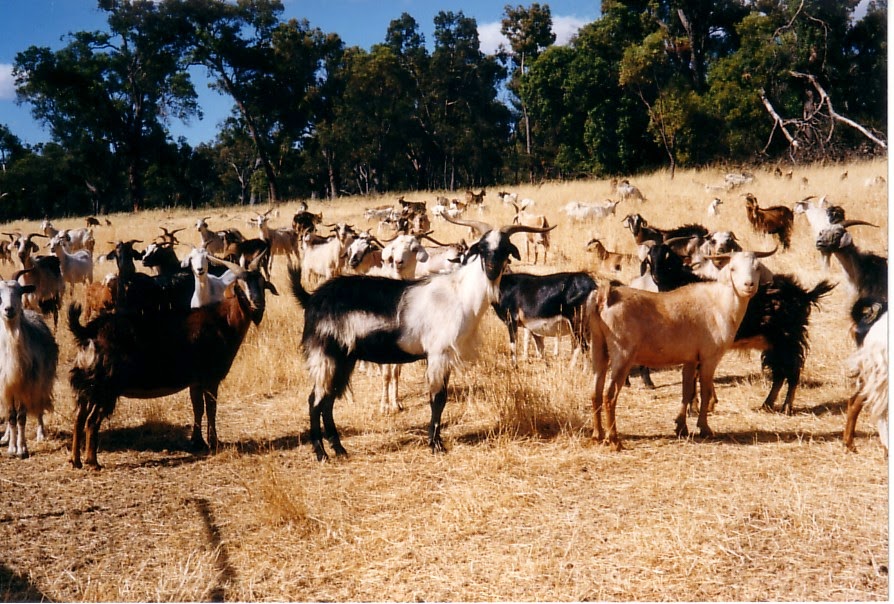 This doesn’t work with goats. The little mobs are outcasts, sometimes small individual family groups who choose to stay well away from the main mob and are reticent to join them. With the plane you pick up the big mob of goats and use it like a sponge driving those goats from one side of the range to the other, and in the process mopping up little mobs along the way. Once the mob is collected and droving then they seem to quieten down and appear half-domesticate in a few hours,” he said.
“The big bush Billys are usually no trouble. If they are introduced to new groups of goats, then they spend the whole muster trying to mate. While Billy is busy fornicating you can do what you want with his mob, so long as he is making sure there will always be a mob of goats, he is happy. We just keep them moving and they are no trouble.
“When you have collected all the groups together, you get the bikes to maintain the same distance and follow the mob into the trap yards. By the time they arrive, I have usually landed the plane and find myself on a motorbike. If you are not careful this is when you may lose some animals. A good dog can round up an escaping goat but we don’t use dogs much because of the distances. It’s very hard on a dog if he has to run alongside the motorbike for three days.”

Once the goats are yarded they domesticate fairly quickly but they also lose weight quickly too. You have to get them away as soon as possible.”
From the outback the feral goats are loaded onto four-deck road trains for the long journey to the Geraldton abattoirs or the docks for a waiting boat. With the cost of the road train plus six men’s wages and food, and flying time, a mob of at least a 1000 goats must be shipped to make the exercise viable. 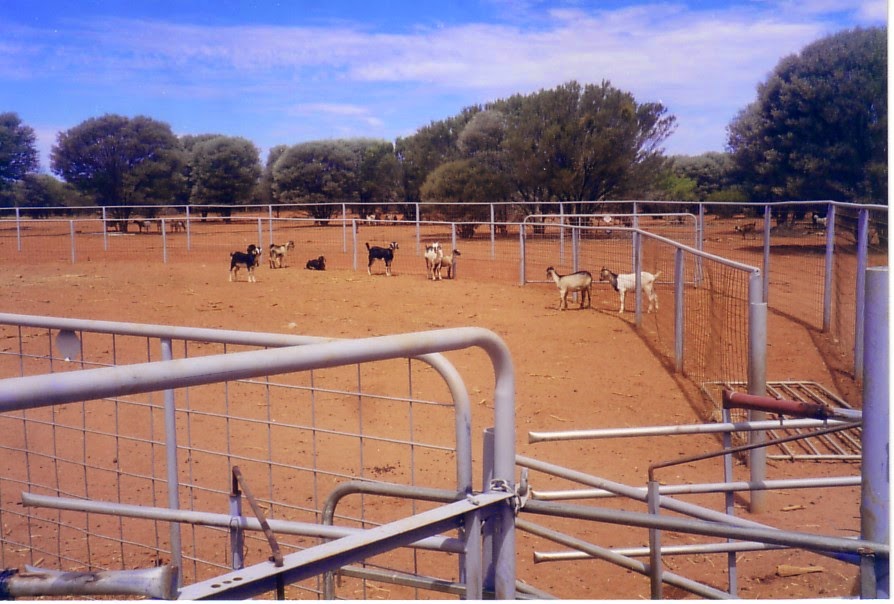 “Running the goats onto the trucks is usually easy and can be done in 3 to 4 hours, but I remember one occasion when this was not the case. We were loading out of Edjudina Station. We had over a thousand goats yarded. Unfortunately the crate on the truck was made of aluminium and the light was shining out of it and the goats would not go near it.
“We had worked for three days in temperatures around 100 degrees. It had been hot and thirsty weather. It was getting late in the afternoon and the boys were looking forward to a drink when we finished so we sent one of the boys to the wet mess at the nearby Palfrey Mine to get a couple of cartons of beer.
“But the goats refused to go up the loading ramp onto the shining truck. They would not budge. By the time we pushed the last goat on, the sun was coming up the following morning, the beer was warm and we hadn’t even opened one can. The six of us had to load those goats one at a time – all one 1000 of them.”
And there was another time when things didn’t go as planned. 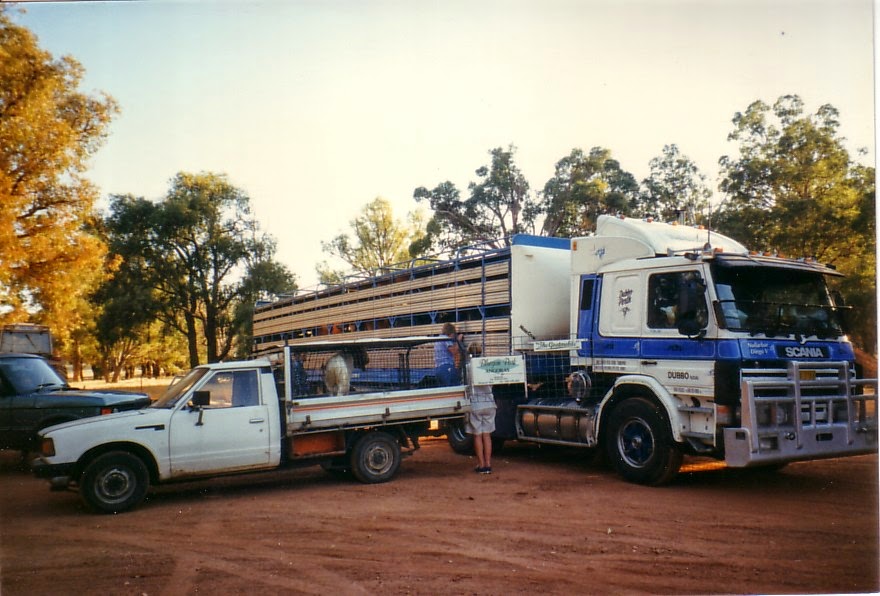 “We had just loaded the triple decker plus two trailers. The open top deck was loaded with the big Billys. This was normal because they don’t fit on the lower decks with their wide spreading horns. (my black buck) one of the riders, was a diabetic and was always swigging on a bottle of water by the loading ramp,” the pilot said. “I remember this big buck looking over the top and as Tom took the top off his water bottle, the goat jumped.”
“I don’t know if it wanted a drink or what, but it landed right on Tom’s shoulders.
It broke one of the guy’s legs and turned his other ankle so badly we couldn’t get his boot off. I had to fly him into Kalgoorlie. He had to lay in the back of the aircraft with his feet hanging over the passenger seat just under my nose. I think he had worn these boots without socks for about a month and the stink of his feet......I will always remember that flight!”
“Old Tom didn’t like goats much after that!” he said.
“I have to agree, goats can be very frustrating but there is no point in getting annoyed with them or you can’t handle them.”

This outback pilot logged hundreds of flying hours in his Cessna 177 high winged aircraft. “You can’t see the ground from low winged planes. Also the high wings make it possible to taxi down laneways and through gateways.”
Flying from Perth to the station country usually takes 2 to 3 hours. The plane has a range of 5.5 hours with a five hour fuel tank.  “But only two hour seats!” he added with a sigh.
As many of the outback station are around 1 million acres in size, each station has several landing strips, one near the homestead and others scattered around the property – near the camp yards, wool shed, water holes. Some landing strips are just dry clay pans. On an average muster the plane logs about 280 knots (400 kms).
When he’s not mustering goats, this pilot operates his own diesel workshop in a West Australian country town. But if the opportunity arises and there are goats to be mustered he closes up shop and flies out to the bush.
“If there is big mob and the market prices are right – then it’s worth mustering them,” he said. “Goats are the cream on the top.”

Note: My thanks to Darryl Bain for sharing his story which was first published in The Goat Farmer magazine.