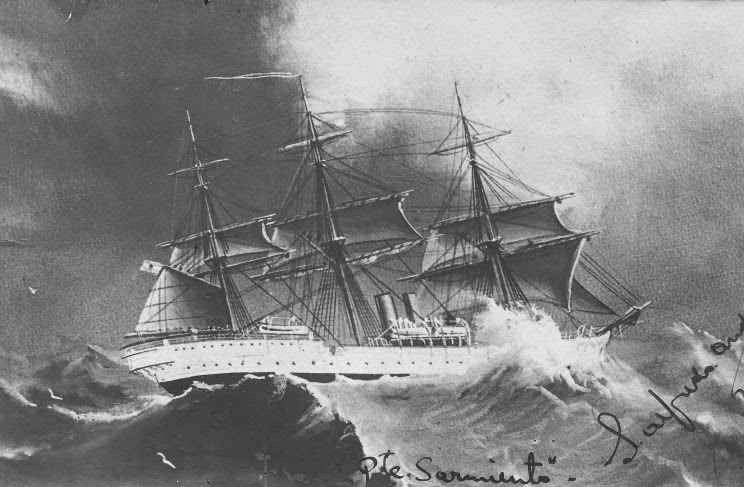 Powered by both wind and steam, Presidente Sarmiento was never intended to be a fighting ship. She was commissioned specifically as a sea-going sail training ship for the Argentine Navy in 1897. 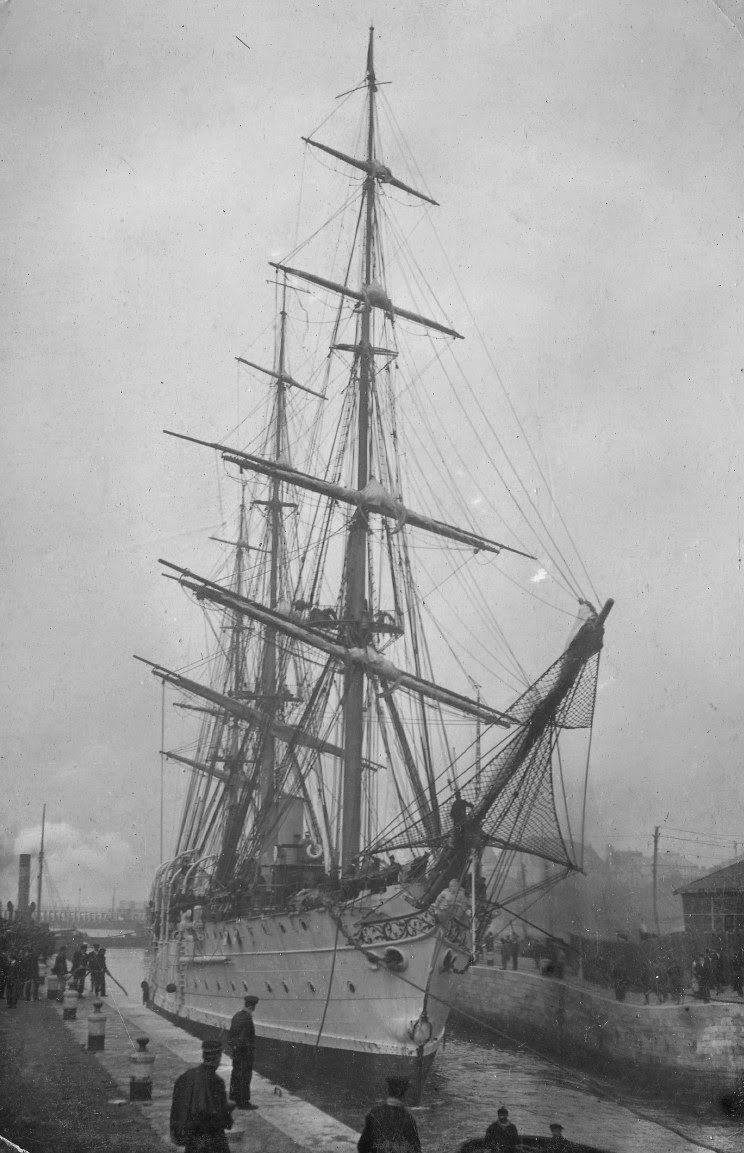 During her service life, ARA (Armada de la República Argentina) Fragata (frigate) Presidente Sarmiento made thirty seven annual training cruises including six circumnavigations of the globe. Her career as a seagoing training ship lasted until 1938 by which time she had logged 1.1 million nautical miles.

From 1938 to 1961 she served as a stationary training ship, after which time she was preserved as a historic vessel and, today, is a tourist attraction in Buenos Aires. As a museum, the ship is open to the public at a very nominal cost. She can be found at Dock III of Puerto Madero in Buenos Aires, within walking distance of the city’s centre. 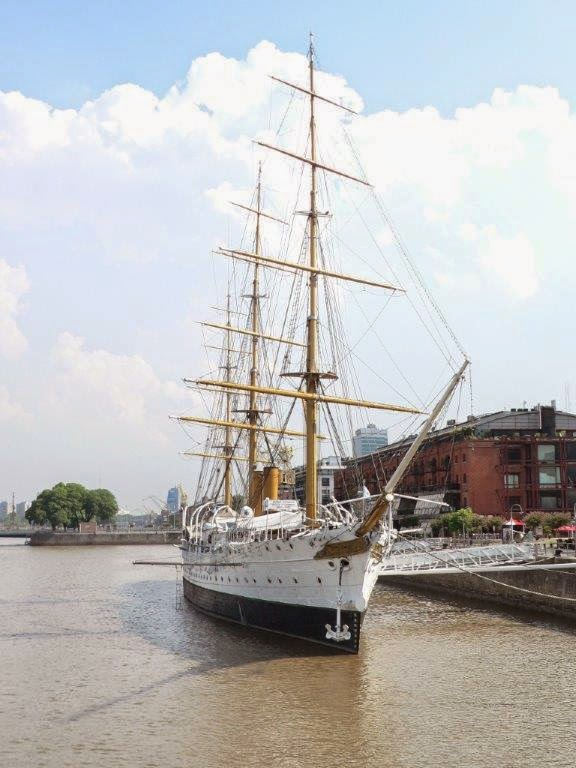 Built by Laird Brothers in Birkenhead, England, the Presidente Sarmiento was launched in 1897 to serve as a seagoing and harbour-based training vessel for Argentinian naval cadets. Over 1500 officer were trained on this ship. 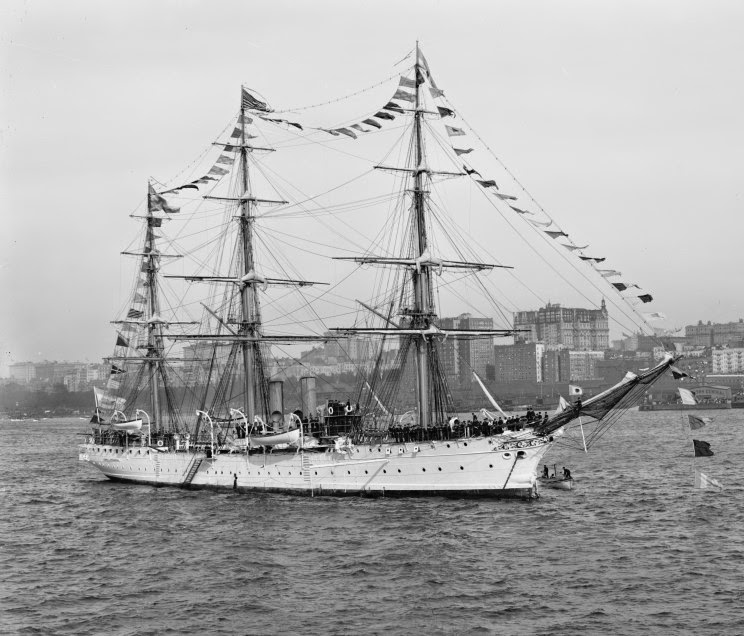 She was named after Domingo Faustino Sarmiento, the seventh President of Argentina and founder of the Argentine Naval Academy. She is the last intact cruising training ship from the 1890s. The figure head on the bowsprit, which was added later, represents the Argentine Republic. 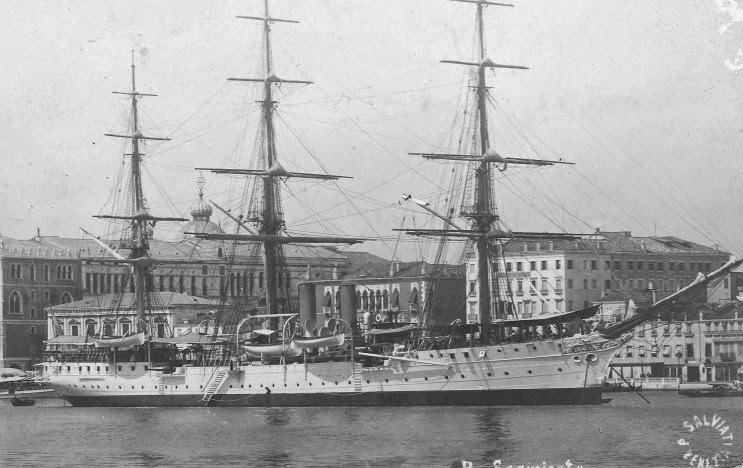 Presidente Sarmiento has three masts and in her sailing days carried up to thirty-five sail. The three-wheeled chain driven Helm controlled the rudder and was manned by six seamen, if necessary. 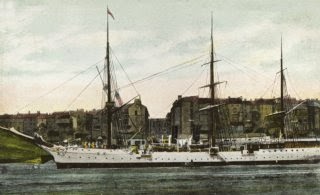 In addition to its sailing rig, this ship is equipped with a 3-cylinder triple expansion steam engine producing 1,000 hp (750 kW). Two coal-fired boilers provide the steam. These emit their exhaust through the rear stack. An additional auxiliary boiler exhausts through the forward stack. This provides power other than for propulsion, including two electrical generators. A large coal bunker is positioned between the main and auxiliary boiler rooms. 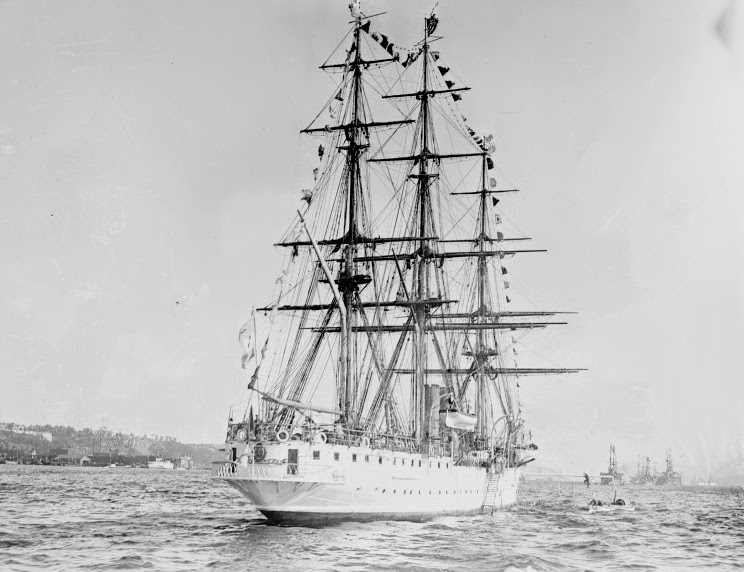 Presidente Sarmiento was capable of making 13 knots but it took a crew of 90 men to manoeuvre her. As a training ship, she carried over 300 cadets. In order to accommodate the large number of trainees, the deck was modified with both the poop and forecastle being extended. 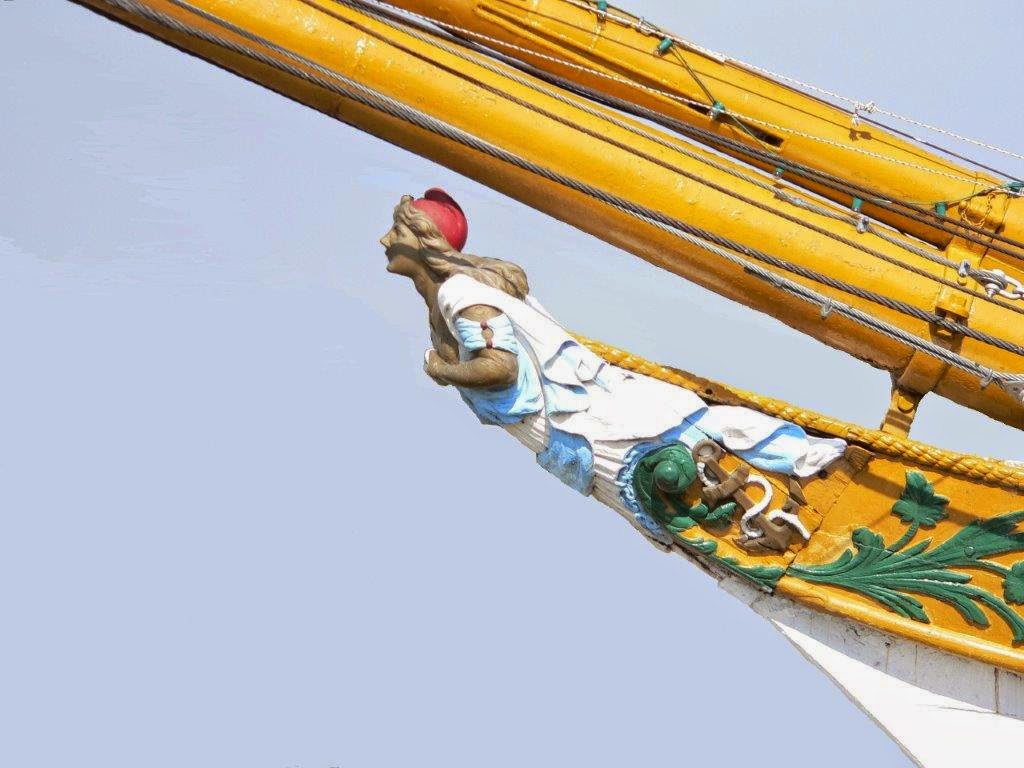 Since retirement in 1961, the interior of the ship has been well-preserved. For today’s visitors it offers a genuine insight into life at sea. Numerous glass cabinets display original artifacts such as flags, maps, compasses and personal items such as shaving equipment. A series of old photographs tell the story of the ship, the naval cadets who trained on her and the former captains who commanded her. 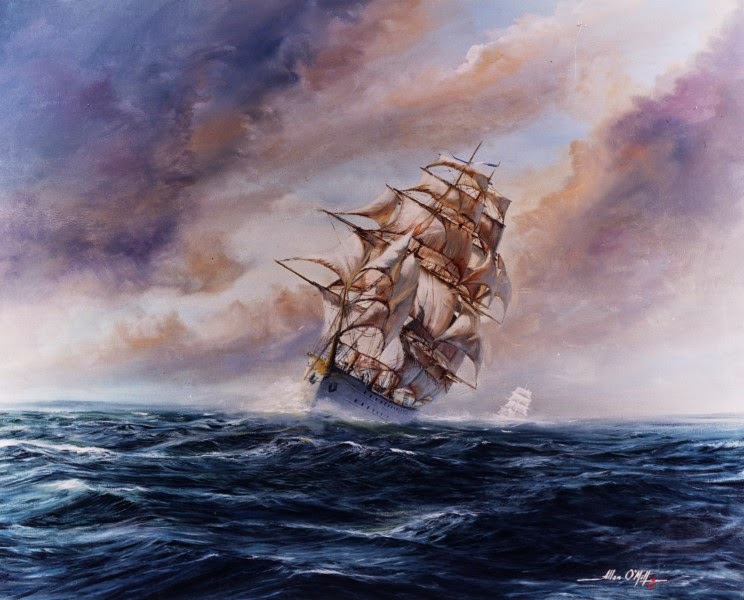 The beautifully restored cabins include luxuriously appointed officers' quarters that feature parquet floors, wood panelling, and leather armchairs. These are in stark contrast to the confined quarters where the cadets slung their hammocks.

Thought the frigate was an armed training vessel, all her voyages were peaceful. She was equipped with four five-inch mounts amidships, two on each side and additional smaller weapons. A single torpedo scuttle using gravity expulsion exited at the bow. The scuttle has been removed and the exit port welded shut but visitors to the ship will find a torpedo on the main deck poised to enter the former scuttle entrance. 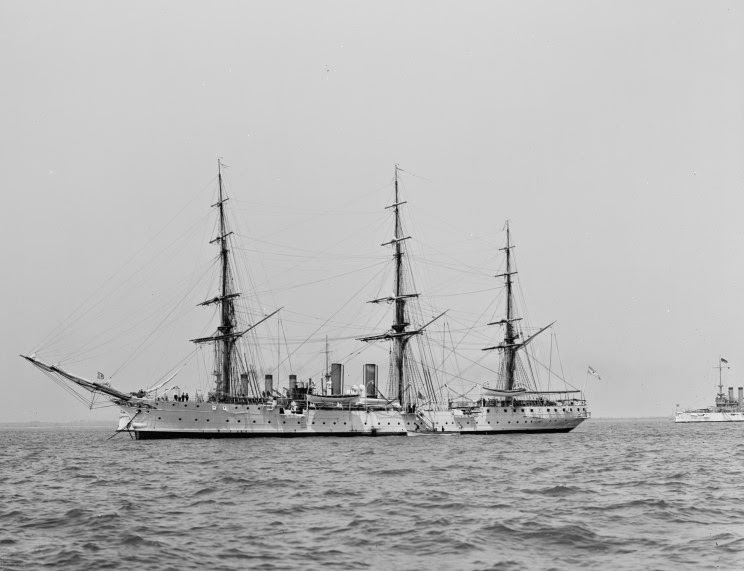 
While the hull is steel, it was covered with a layer of teak. The lower part of the hull is sheathed in copper plates. 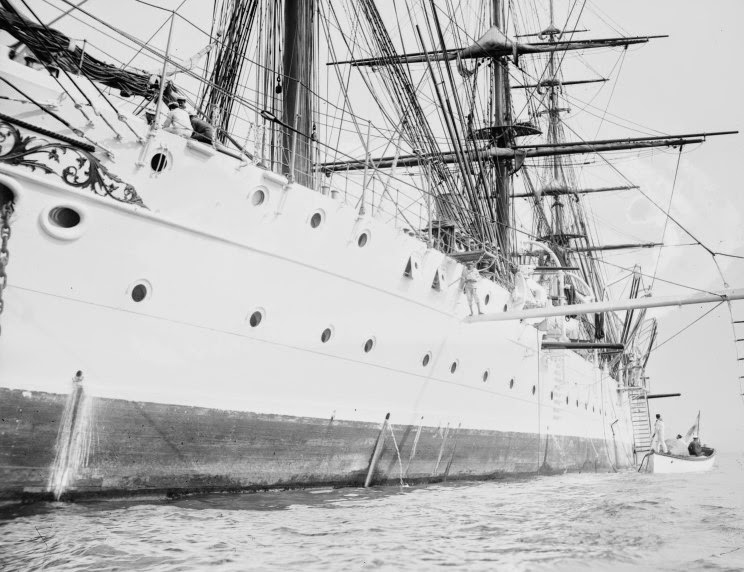 It is ten years since I stepped aboard the Presidente Sarmiento. It was a vessel that inspired me when I just beginning my love affair with historic ships. If you are ever in Buenos Aires, I would thoroughly recommend a visit. 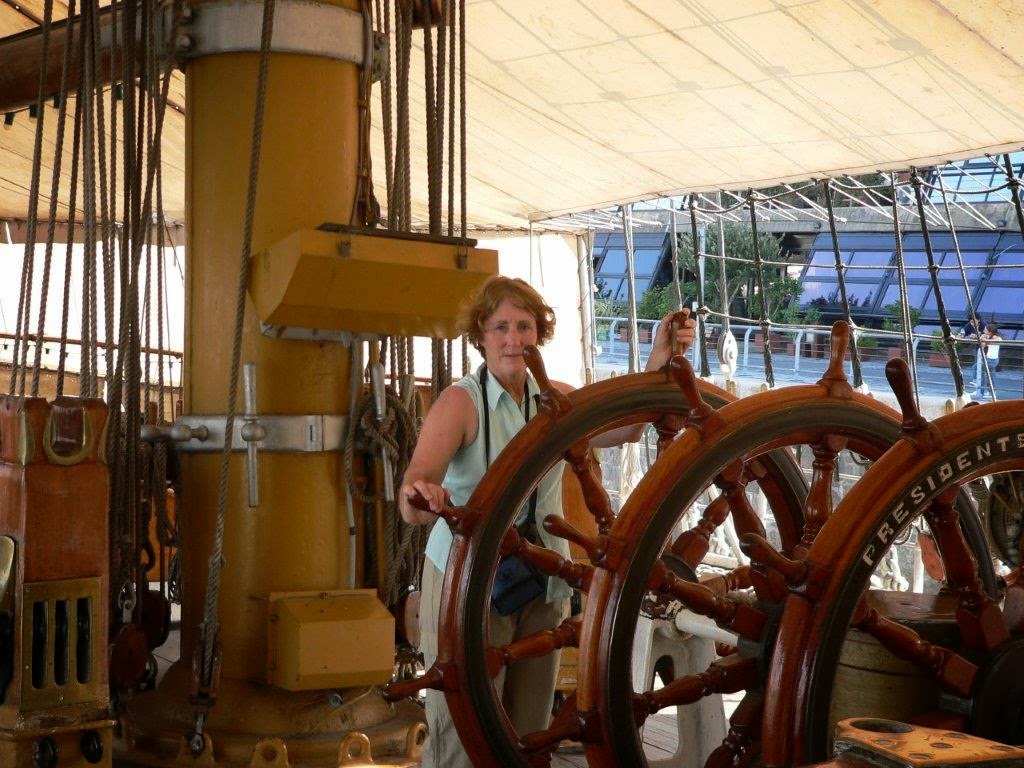 Pics include:
Ship draped in bunting in 1902 only a few years after being launched in 1898.
Artistic Portrait of ARA Presidente Sarmiento by Allan E. O'Mill
Frigate Presidente Sarmiento on the 1000 peso Moneda Nacional 1964
Frigate at East Circular Quay in Sydney in July 1928 (It visited Sydney in 1901, 1906 and 1928. Australian National Maritime Museum’s Samuel J. Hood Studio collection)
Author at the helm.


Full list of pics and sources supplied if requested.
Posted by M. C. Muir at 9:44 am