In 1802 ‘Santísima Trinidad’ was the largest*** warship in the world. 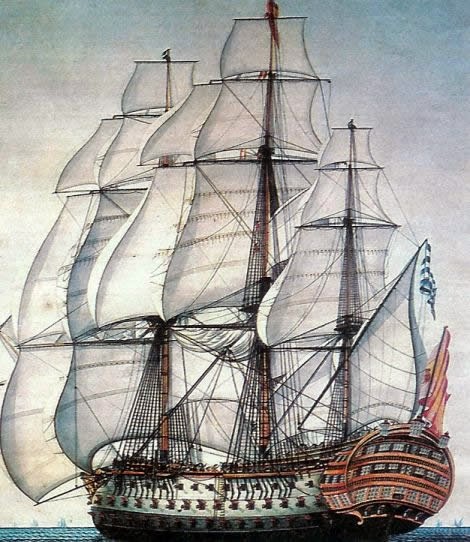 Designed by an Irish naval architect, the Spanish first-rate, Santísima Trinidad (Holy Trinity) was built in Havana, Cuba in 1769. Originally designed with three gun decks she bore 112 cannon. Twenty five years later, 18 more guns were added when a fourth deck was created by closing in the spar-deck between the quarterdeck and the forecastle. 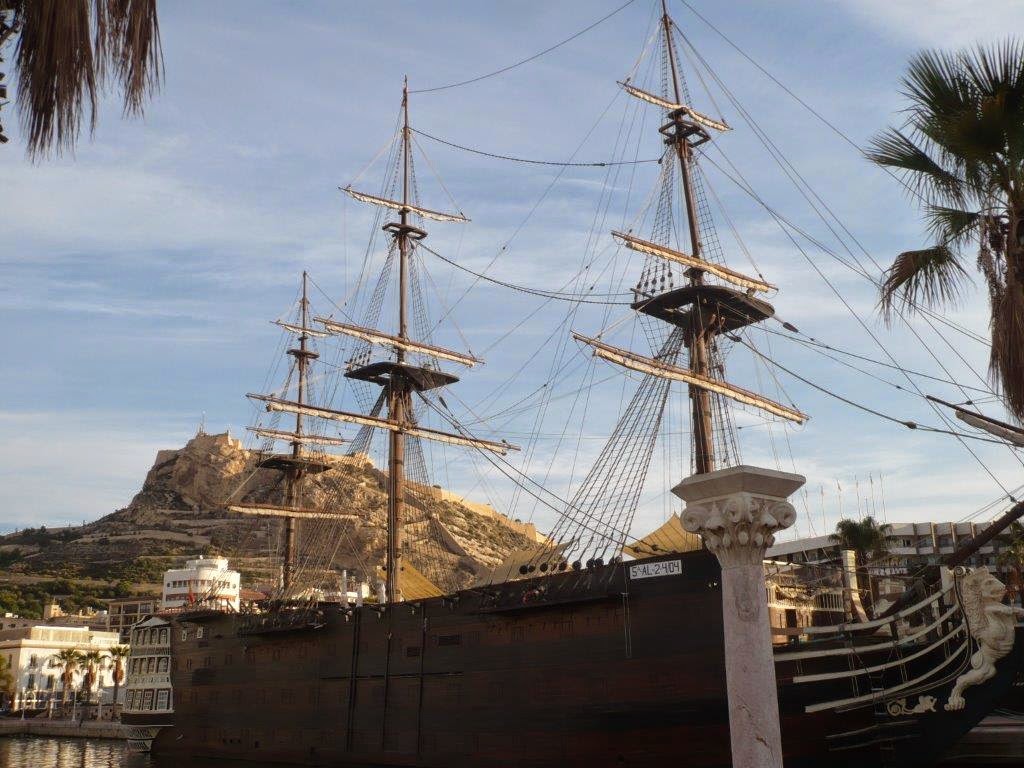 When Santísima Trinidad, sailed for Trafalgar in October 1805 with the combined Franco/Spanish fleet she carried more guns than any other ship-of-the line outfitted in the Age-of-sail but ‘due to her great bulk, her helm was unresponsive in the light winds of the day’ and she was targetted by ships of the British fleet. 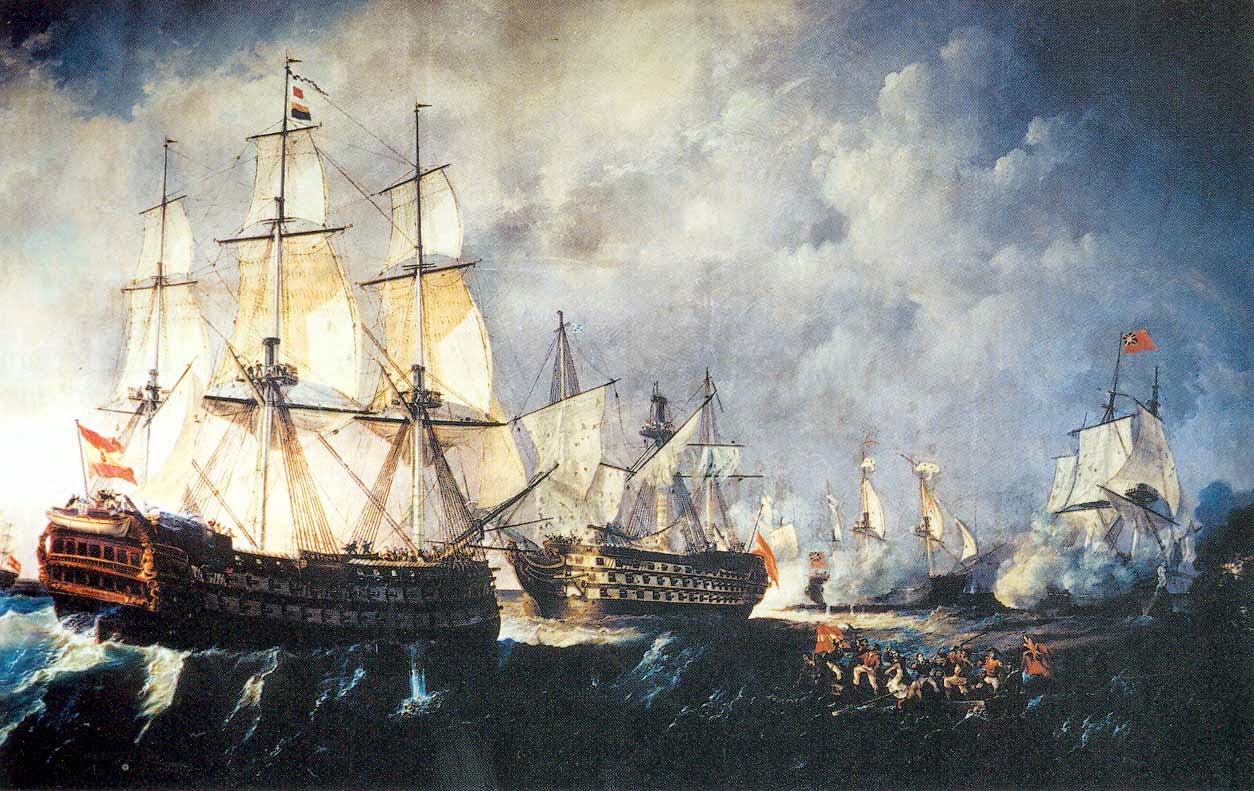 Having lost her mast she eventually surrendered and was taken in tow. In the devastating storm which blew in the day after the battle, she sank. 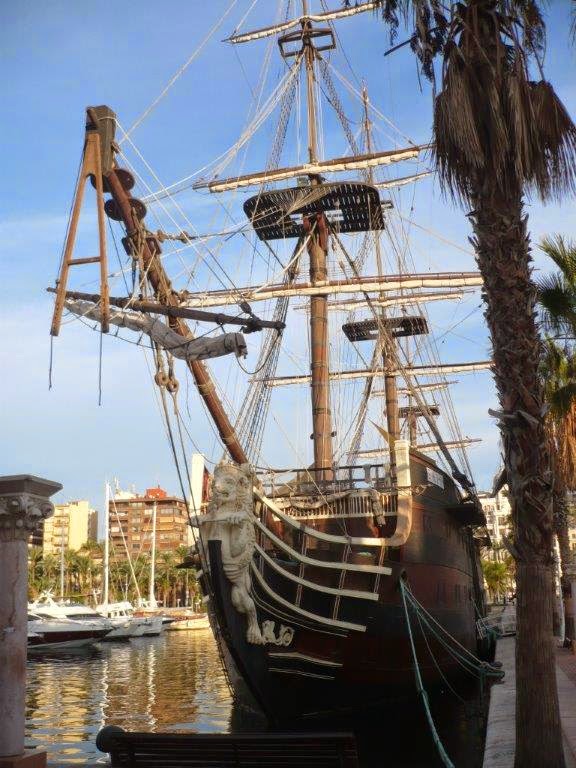 Today a full-size representation of Santísima Trinidad sits on the wharf in Alicante, in Spain. This is not a true replica, but was constructed over the steel hull of a merchant ship. 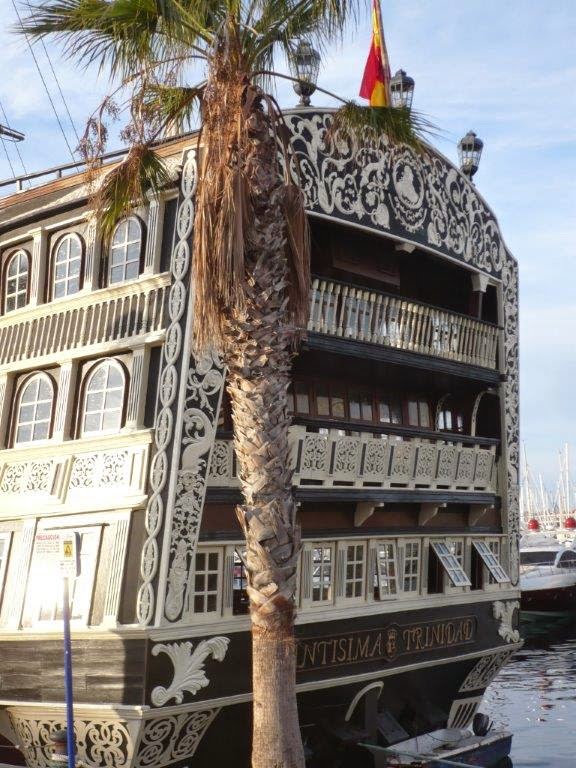 The stern galleries are particularly impressive. 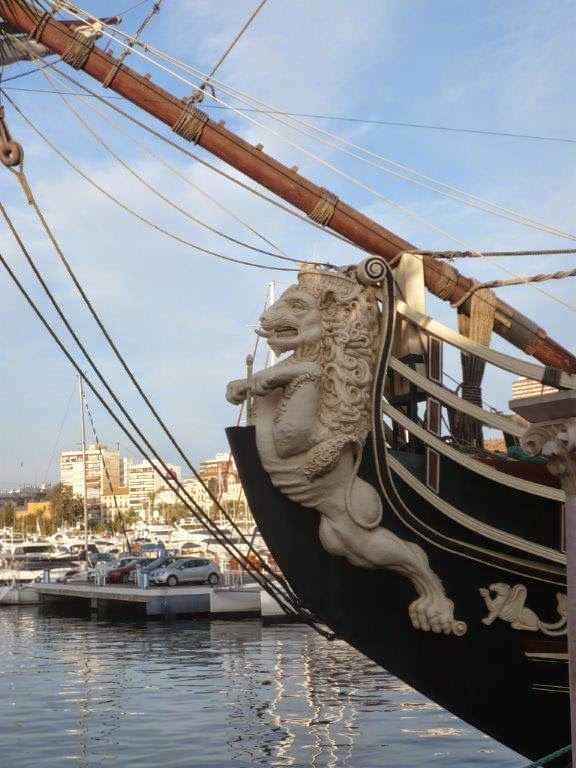 
Nautique.
As the detailed evidence is specific and quite extensive I have not included those facts in this post but trust that readers will seek out this information to update their knowledge.
I extend my thanks to the writer of the comment for this.
MM
Posted by M. C. Muir at 11:34 pm

For me it is nearly impossible to imagine 1050 crew members living an 60 meters long ship.

I have had the pleasure to read FLOATING GOLD and I liked it a lot.
I was really happy when I read that there will be a fourth novel starring Oliver Quintrell.

I agree about the overcrowding. I have sailed on the Dutch tall ship Europa but there were only about 50 people on that. It would have been incredibly crowded with 1050 people.
I'm glad to hear you enjoyed Floating Gold. I have just finished writing THE UNFORTUNATE ISLES and hope eto have it published before the end of the year. MM

Thank you for gathering this information and posting it. Bob and I really enjoyed cruising with you, in 2012. When in Alicante, Spain, he and I enjoyed a drink aboard the ship reminiscent of Santisima Trinidad. (I believe you were off on a trek to the castle?) In my novel in progress, the protagonist Patricia finds herself in Havana a few years before the Santisima Trinidad was launched. I can't resist the opportunity for her to see it in the beginning stages of construction.

What a great setting to incorporate into a story. Good luck with the next Patricia MacPherson story. I will look forward to reading it when it is published.

Thanks for your article. But the Santísima Trinidad wasn't the largest ship in the world in 1802. She possibly had been the largest one between 1771 or 1778 and 1788, but from the 7th of August 1788 the largest ships in the world were the French 118-gun ships of the line, like the Commerce-de-Marseille (broken-up in 1802) or les États-de-Bourgogne (launched on the 8th of November 1790, and, renamed l'Océan, used until 1855). In 1802, one of these ships was used in France (l'Océan), and two copies in Turkey (the Fethiye and the Selimiye), two other ones being launched in France in 1803 (le Majestueux and l'Impérial).

May I link to show evidence ?

Thank you for your comment. I would appreciate the link/s as evidence to your statements.
And, would it be OK with you if I transferred your message to the body of my blogpost as an update.
Very interesting.
MM

Anyway, « As the only ship with four gun decks, she [the Santísima Trinidad] was reputed to be the largest warship in the world, for which she was nicknamed El Escorial de los mares by the Spanish, until surpassed in sheer size by the new type French 120-gun ships such as Océan (1790) and Orient (1791). » ⑵

And, according to the article Océan-class ships of the line ⑷ of Wikipedia in English, from 1788 to the middle of the nineteenth century, France always had at least one of these ships, larger than the Santísima Trinidad was, so she was never the largest ship in the world after 1788.

Furthermore, according to a Turkish historian, Mr Emir Yener, quoted by a French website ⑸, two copies of the French 118-gun ships of the line were launched in Turkey, the Fethiye in 1798, and the Mesudiye in 1801, the last one serving during more than fifty years.

The Santísima Trinidad wasn't the largest ship in the world in 1802, if she had ever been, but she was one of the largest ones.

Some ten tons of painting were needed for such ships. Black painting was made from soot, lampblack, and currently used just over the waterline, sometimes above, rarely covering the whole sides. Yellow ochre was currently used for the upper sides, or to emphazise the gun-decks. Red ochre was usually used inside, and lime was used to whitewash some parts.

« About the external painting of foreign men-of-war at the time of Trafalgar, Captain William Stanhope Lovell, who took part in the action in the Neptune, gives some interesting particulars. Speaking of the ships of the allies, he says :
“Some of them were painted like ourselves with double yellow sides ; some with a single red or yellow streak; others all black; and the noble Santísima Trinidad, with four distinct lines of red, with a white ribbon between them. […] The Santa Ana […], was painted all black. […] It was remarked by (Nelson) that the enemy had the iron hoops round their masts painted black. Orders were issued by signal to whitewash those of his fleet, that, in the event of all the ensigns being shot away, his ships might be distinguished by their white masts and hoops.” » ⑹

With her high ouline and her four gun-decks emphazised in red and underlined in white, the giant Santísima Trinidad was for sure a very impressive sight.

Writing in English isn't easy to me. I'll make a new comment. Thank you very much for your patience !

I commend your extensive knowledge of this vessel and thank you for your advice.
I have posted an update on the bottom of my blog and hope readers will take the time to read the information you supplied.
Many thanks for sharing your expertise.
Margaret Muir

Many thanks to you, Mrs Muir ! I'm going to blush on reading your praises !

I consider your update as perfect. But I wish I can make a new comment to support my statements, hoping than, on Internet, everyone will find informations when needed. My aim is to make these data avalaible. If you regard as abusive my comment because of its lenght or because of the many links involved, you just have to delete it, I would understand your reasons.

It could be easy to explain it. In 1769 the Santísima Trinidad had almost the same dimensions than two other Spanish three-deckers (according to the Royal Navy, 194'3" × 54'3", 2457 tons burthen, & 190' × 54'3½", 2398 tons burthen). After being rebuilt her keel lenght and her beam, from which burthen is calculated, were hardly increased, and she had been lenghtened by 6 Burgos feet and 4 inches, so her lenght could hardly be over 201'. Thus in all her dimensions she was smaller than the Océan-class ships of the line as measured by the Royal Navy.

But there is a possible mistake due to discrepancy on the Burgos foot. Yet it is possible to compare a Spanish ship to another one, and to have the British Navy for referee.

One of the larger ships in the world, the Santísima Trinidad was surpassed in sheer size, as asserted by Wikipedia in English, by the French 118 / 120-gun ships of the line. From 1788 and during dozens of years, there was always one of them in use (three in 1802 : the Océan ⒁ in France, the Fethiye and the the Mesudiye in Turkey).

Thank you again, Nautique,
I hope some readers will investigate the links you have provided.
Perhaps you should include all this in a blog of your own.
Regards,
MM