THE TAINTED PRIZE, by M.C. Muir
by Peter (Navy Fiction) on January 1, 2013 (http://navyfiction.com/the-tainted-prize-by-m-c-muir/)
In The Tainted Prize, the sequel to Floating Gold, we once again, in the year 1803, meet up with the likable Captain Oliver Quintrell. Muir’s series – subtitled “Under Admiralty Orders – The Oliver Quintrell Series” – is a recent but welcome addition to the naval historical fiction genre. 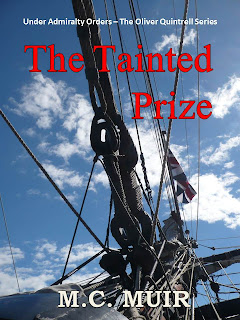 The Peace of Amiens has collapsed, and Quintrell is now appointed Captain of the frigate HMS Perpetual. With the appointment comes a special, somewhat unusual, and quite possibly tough mission. Captain Quintrell is ordered by the Admiralty to take his ship and crew on an arduous mission to the far side of the world: to Pacific Southern America via Cape Horn. His task is to find a missing frigate – another English Navy ship sent on a secret mission to South America – or, if he can’t find it, try to find out what happened to it.

This, it turns out, is a much tougher mission than imagined , and one that will require Captain Oliver Quintrell and his crew to use their wits as well as their nautical skills to succeed. In the Age of Sail, there were few places more challenging than Cape Horn and the treacherous Straits of Magellan – with rough seas, rapid weather changes, storms, and freezing cold. In addition, Quintrell and his crew has to deal with French corvettes, privateers and slavers, as well as intricate diplomatic relations.

Once again Muir tells an interesting tale of hardship and struggle, against the forces of nature and against other men. The author is very good at describing life onboard the ship, both during “normal” routine days and during battle. Muir tells the tale from the point of view of several of the characters, and this broader perspective makes the book very interesting to read. We get to know several interesting members of the crew in addition to the Captain: the escaped slave, Eku; Tommy Wainwright, the persistent young boy and powder monkey, and several others. Muir has a great ability to draw interesting and lifelike characters as well as good interactions among her characters – they come alive and flavor the story. And the main protagonist, Captain Quintrell, is an intriguing and likable man, perhaps even somewhat charismatic: Smart, with integrity, skill and quite able to see the forest and not only the trees. 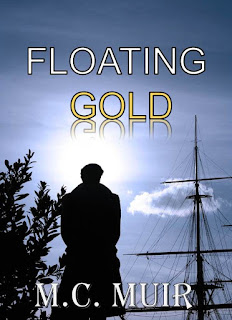 Having read and enjoyed Floating Gold, I was hoping for a second meeting with Captain Oliver Quintrell, and I was not disappointed. I recommend The Tainted Prize for all lovers of good naval fiction. It is an enjoyable and well-told tale. Personally, I am already looking forward to my third meeting with Captain Quintrell!
Links to books by M.C Muir at Amazon US, Amazon UK, and Amazon CAN.

Great place where you can enjoy Desert Safari Dubai...