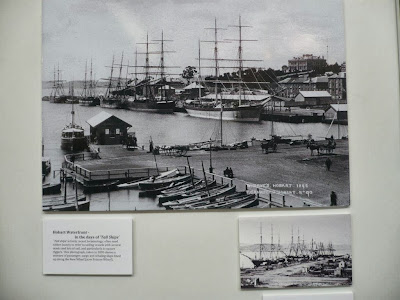 September 2013, Hobart, Tasmania was visited by a group of Dutch Tall Ships and several other ships as part of the Tall Ships Festival. Some of these ships had travelled half-way around the world as part of a circumnavigation of the globe.

This was Hobart's greatest assembly of tall ships since the bicentennial celebrations of 1988.
The old poster of a photograph taken in 1895, shows cargo and passenger ships, plus whaling ships berthed along the New Wharf (now called Princes Wharf). 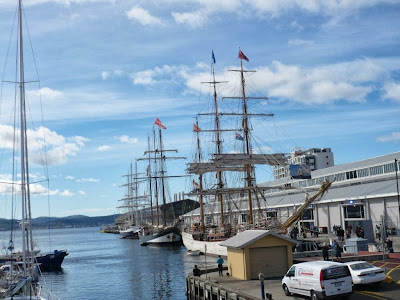 Across on the Elizabeth Pier another 5 ships graced the Hobart’s waterfront. 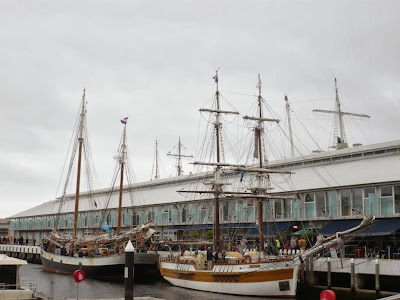 The Lady Nelson (replica 1798 colonial brig) was built on the Derwent and is a permanent feature on the harbour.
Behind her is another Dutch ship, Tecla, a 2-masted ketch built 1915. Having seen her on the water, I can confirm she is very fast. 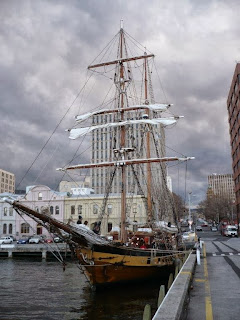 On the other side of the pier, Hobart's Windeward Bound (earlier pic), a two masted brigantine built in Tasmania. 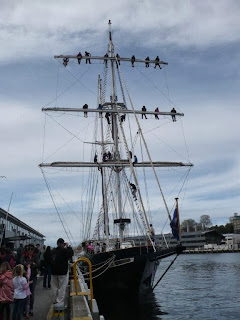 She is followed by the Young Endeavour STS whose crew ‘dressed’ the ship as she came into dock. 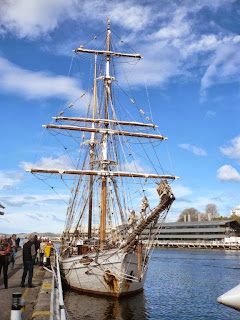 And last but not least, the Soren Larsen - Danish built but now based in Sydney, which was made famous in various movies including The French Lieutenant's Woman and The Onedin Line.


Hobart's Tall Ship Festival also hosted a fine display of wooden boats and a Viking ship, which I will include in the next post.

There are profiles on some of the ships in your article like the Lord Nelson, Europa and Oosterschelde.

Thank you for your post. I was pleased to sail with Europa, in convoy with the other ships, along the Australian Bight for three weeks. It was a wonderful voyage and adventure.