Where Wild Winds Blow - a review 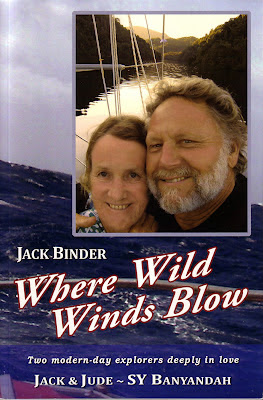 Where Wild Winds Blow by Jack Binder is a remarkable true-life adventure of two modern-day explorers. It tells of a sea voyage in a home-built yacht, Banyandah, which takes Jack and Jude half way around Australia and through some of the roughest seas known to man.

Where Wild Winds Blow is written in Jack’s inimitable style – sometimes brash, often touching but always heart-warmingly honest. The author has a masterly way of seeing and appreciating Nature in all its awesome beauty, and an engaging way of describing the couple's connection with it.
The book’s pages exude the child-like enthusiasm Jack and Jude experience when investigating new places – windswept islands where few people have walked before them – and of the trials they encounter along their journey.

But Where Wild Winds Blow reveals more than the intoxication of a sea voyage in the company of dolphins, whales and sea eagles, it also relates to the pain of a perfect storm, of an encounter with modern-day pirates, of broken equipment, near beachings, the intense chill of Antarctic winds, and of course, the constant challenge and changing moods of the sea.

Where Wild Winds Blow is a great complement to Two’s a Crew and a recommended read for anyone who loves the sea.